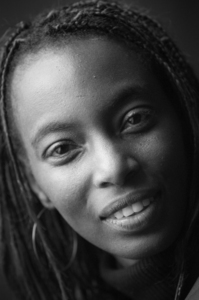 This week, we talk with Yvonne Adhiambo Owuor, winner of the Caine Prize for African Writing and author of the novel Dust. Her work has appeared in McSweeney’s and other publications, and she has been a TEDx Nairobi speaker and a Lannan Foundation resident. Born in Kenya, she now lives in Brisbane, Australia.

Yvonne Adhiambo Owuor will be participating in two events at the PEN World Voices Festival: Ninety Minutes, Three Minds and In and Out of Africa.

When did being a writer begin to inform your sense of identity?
When I was seven years old and Mrs Saunders pinned my poetic offerings on the class wall with five gold stars. She also called my mother in to ask her if I had plagiarized the work. It was the first time I had heard that word—plagiarized. Being extremely shy, and inclined to seeking invisibility, the fact that my words could cause me to be seen mattered, it really mattered to a little girl.

Whose work would you like to steal without attribution or consequences?
J.R.R. Tolkien of course—what a panoptic vision, what a way of seeing and connecting and world-making. I’d also like to steal the phrase: “In the beginning was the Word.” Gorgeous.

When, if ever, is censorship acceptable?
When George W. Bush and his merry gang construct, publish, and broadcast a fiction about weapons of mass destruction, and with that fateful story, push the red start button for the abysmal Armageddonian bedlam that has emerged as our world today. The world’s censorship committees should have had the courage to howl no!

Have you ever been arrested? Care to discuss?
Yes, for a traffic violation. One Friday afternoon I rode into a web of rapacious police creatures looking to make up their weekend bonus. I was not wearing a seat belt in a matatu (a public transport vehicle used in Kenya).

Obsessions are influences—what are yours?
Are they influences? My obsessions are numerous and varied and therefore lead me to my greatest obsession: to be still, to know silence within, to be so still that in the words of that poet—I forget his or her name—shy creatures will come close to me in order to see their faces.

What’s the most daring thing you’ve ever put into words?
I have not put it into words yet.

What is the responsibility of the writer?
To the story, to the urge, the feeling that has emerged in the writer and expects to meet the world.

What book would you send to the leader of a government that imprisons writers?
Ars Moriendi’s The Art of Dying. I would also have the conveyor of that text intone to its receiver: “Memento Mori.”

Where is the line between observation and surveillance?
Does it not lurk in those crooked interstices between motive and intent? Does it perhaps not also gleam in the eye of the beholder and his or her attitude to the object of his or her gaze?