The PEN Ten with Uwem Akpan 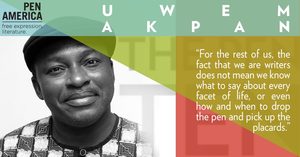 The PEN Ten is PEN America’s biweekly interview series curated by Lauren Cerand. This week, Lauren talks to Nigerian writer and Jesuit priest Uwem Akpan. His story “My Parents Bedroom,” from his short story collection Say You’re One of Them, was one of five short stories by African writers chosen as finalists for The Caine Prize for African Writing 2007. Say You’re One of Them also won the Commonwealth Writers™ Prize for Best First Book (Africa Region) 2009 and was a finalist for the Los Angeles Times Art Seidenbaum Award for First Fiction.

It was when I crossed the line between poetry and creative nonfiction into fiction. It was after college. I was about 28/29.

There are so many wonderful writers out there. I love any work that raises my adrenaline while helping me to see.

On my bed, facing up, knees drawn up to prop up laptop. Even when I’m in an office, if it is possible, I still love to lean back on my swivel chair and prop my legs on the table and write. Please, don’t ask me where I got such a lazy pose from!

No, I have never been arrested. But some overzealous airport police almost messed me up thinking I had abandoned my luggage.

There was a time I obsessed about the poetry of Rilke, and classical guitar and the banjo. I tried the banjo for a while when I came to the US for college in 1993.

I would be afraid to say in public!

I think it is to show, to help the reader to see.

If a writer is gifted enough to be public intellectual, then he or she should go for it. For example, I admire Mr. Wole Soyinka for being able to do so many things at the same time. How he is able to accomplish these things is a mystery to me. If this sort of talent could be taught then I would like to be his student. But I do not think every writer has the talent for this. For the rest of us, the fact that we are writers does not mean we know what to say about every facet of life, or even how and when to drop the pen and pick up the placards. Listen, being a good writer does not mean we would know how to run an institution or a country, even when we write so passionately about what is wrong with our world. I think it comes down to knowing who one is and humbly accepting our limitations. Otherwise we could bring more pain, confusion, and destruction to the people we had hoped to help or lead.

I thought you were going to ask me what book I should send to Boko Haram now that they have refused to bring back our 200+ girls who were learning how to read and write! Or even to the government of Nigeria, which is more interested in criminalizing those protesting the inaction of the government… I do not know what book would touch the hearts of our Boko Haram leaders or those of our government. If secondary school girls are being abducted for learning how to read and write, the whole enterprise of reading and writing is destroyed and a whole generation of girls in northern Nigeria may grow up afraid to go to school. And all this violence is done in the name of God?

The government has become reactionary and is spying on everything and everybody, which is not good. But what margin of error do we give our leaders in checking terrorism? In any case, it is not the business of the artist or writer to do surveillance.

ICYMI: Listen to our latest Works of Justice podcast interview w/ @DorothyERoberts on TORN APART (@BasicBooks), a new book on dismantling the child welfare system, and help us celebrate our Writing for Justice Fellows. https://bit.ly/3OCIYET