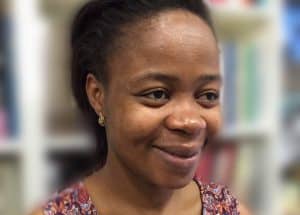 The PEN Ten is PEN America’s weekly interview series. In this week’s interview, translated by Lawrence Schimel, Kyle Dacuyan speaks to Trifonia Melibea Obono, a journalist and professor at the National University of Equatorial Guinea.

1. How does your identity shape your writing? Is there such a thing as “the writer’s identity?”
It’s a lot of work to define the identity of a woman writer from Equatorial Guinea. I belong to a generation of women writers in search of our identity. We’re characterized by a miscegenation of thinking and social exclusion because we question the fundaments of the patriarchy. We’re called “rebels” for every step we take.

I am an Equatorial Guinean woman born in poverty, my country depending on foreign debts to function as a state. After that hunger came our precious woods and petroleum, the world began to know us as a gas-producing country. Recently, we’ve returned to the decades of the 70s and the 90s. Now, once more, I see minors selling basic essentials in the streets; students with strong survival instincts faced with overwhelming unemployment. If I had to write at this moment, I couldn’t overlook this panorama.

The identity of a woman who writes is the daily life of her people, it’s not defined in some static or fixed way.

2. In the United States, we’re seeing media platforms, political leaders, and communities significantly divided on what constitutes the truth around a number of issues. Are there experiences specific to Equatorial Guinea you are writing toward the truth of?
To tell the truth, I’m not sure. It’s complicated. However, to introduce subjects that are considered taboo and are ignored by both the community and by the state into the public debate, then yes. This is the case of homosexuality, the vindication of feminism as an ideological movement that is also African. Both phenomena are considered “white people things” in my country.

And what do you believe is the relationship between truth and fiction?

Truth and fiction have a troubled relationship.

3. Writers are often influenced by the words of others, building up from the foundations others have laid. Where is the line between inspiration and appropriation?
We women and men who write don’t appropriate the words of “others,” very often we give voice to people because access to means of communication is restricted. We don’t exist without the “others” because writing is a social duty, a work for social change. We women writers live in societies, we relate with our communities, we’re inspired by our surroundings which are, above all, human.

A novel, a work of poetry, a short story, is a set of characters, of voices, of the “others” in dialogue, speaking, negotiating for social coexistence. People who write are privileged: They transmit in a book what many people think plus the reflections of the characters of the literary work.

4. Your novel La Bastarda touches on queer experience, experience within a particular patriarchy, as well as hierarchical family relations. How have you seen these conditions change over time in Equatorial Guinea, and what do you hope to see change?
The issue of anything queer is very difficult. . . . The patriarchy manifests as hierarchal family relationships, and changing that is very difficult. For now, the changes are being led by the victims of the system: women aware of their rights, homosexuals aware of their rights, the (few) men aware that the patriarchy doesn’t make them human, human rights activists, etc.

Up until now, institutional efforts for change regarding queer matters and the patriarchy are shy, very shy, almost always focused on folklore. I don’t see a real effort for the emancipation of the victims of the patriarchy.

5. Your novel is also the first by an Equatorial Guinean woman to be translated into English. What opportunities do you see in carrying queer ways of speaking and forming community across languages and culture? And what do you think are the challenges in that translation?
Advantages from the translation of La Bastarda into English, within Equatorial Guinea: none at all. In fact, it brings problems. The Guinean population is for the most part allergic to dialogue, to debate, and to negotiation, cultural politics have educated us that way. Every time our country is spoken about abroad, alarms go off and one hears sentences like: “They hate us,” “The white folks are jealous of our development,” “Colonialism is over,” “So-and-so has been washing our dirty laundry,” or “Hey, shut up, and let us talk about our own problems ourselves.”

Nonetheless, in Equatorial Guinea they don’t let you speak either.

Suddenly I’ve been labeled an “opposer,” although I don’t know who I’m opposing. I am a citizen aware of her rights, I consider a life without rights to be death. That’s why I get up in the morning. That’s the reason I work. I don’t have political parties. I am a militant feminist and LGBTI activist.

I work for the Equatorial Guinean people, which is the largest entity we have, and the majority of the problems we, the Guinean populace, suffer are rooted in the patriarchy, whose main weapon of subjugation is violence in all its manifestations, and the oppression of women and homosexuals.

The translation of the novel into English is good news that’s very distant from Equatorial Guinea. But the world is interconnected, and the visibility is very important.

6. How do you think your work as a fiction writer, journalist, and researcher inform one another?
I think it’s good, that interrelationship is important, but it is also important to know the limits of one work and the other.

7. What do you consider to be the biggest threat to free expression today? Have there been times when your right to free expression has been challenged?
My right of free expression has always been infringed. Because I am not heterosexual, I don’t have the freedom of association in my country. I don’t have any rights. Any person, backed by religion or by Bantú culture, violates the right of LGTBI people to physical integrity, to life, love, free circulation, to living freely in any part of the culture. The culture here severely punishes diversity of gender identity or expression.

In my country, for example, forced maternity is the rule and not the exception among LGTBI women. This is a fact of life, which violates fundamental rights of women. The response to projects for the eradication of this violation of human rights is that “lesbians are not protected by the constitution.” To be a feminist and openly bisexual women, I don’t have the right to be heard. What use is it for me to speak if nobody listens to me, if nobody hears me?

The biggest threat to freedom of expression today is social exclusion.

8. What’s the most daring thing you’ve ever put into words?
The most daring . . . two things. Coming out of the closet while living in Equatorial Guinea and the consequences of my feminist discourse while living in Equatorial Guinea. They’re two subjects that have cost me social exclusion. For myself and for any people who work in these same areas. Guinean feminists have a very sad friend: loneliness.

9. What are you working on currently?
I work on everything I can in order to make ends meet by the end of the month.

10. Finally, can you tell us about a piece of writing that has influenced you that others may not know about?
The literary work that has most influenced me is the oral discourse of the ethnicity of my father and mother, the Fang people, one of the many ethnic groups that make up Equatorial Guinea. The feminist discourse of my ancestors is transmitted from mother to daughter through songs, music, stories, with baskets on their backs, the nkueñ, a very heavy container that women carry on their backs, in groups, traveling over many kilometers until reaching the village. That’s how I learned how to be a feminist. I learned from philosophers who have never written a book in their lives, but who know the art of speaking, of constructing an ideology through orality; they represent the resistance.

The PEN Ten with Romeo Oriogun

The PEN Ten with Ian Bassingthwaighte