The PEN Ten with Saeed Jones 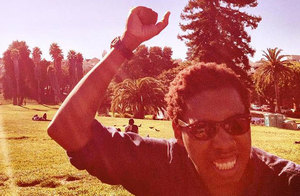 The PEN Ten is PEN America’s biweekly interview series curated by Lauren Cerand. This week Lauren talks with Saeed Jones, the editor of BuzzFeed LGBT and a Pushcart Prize-winning poet. His debut poetry collection Prelude to Bruise is out now from Coffee House Press and in a starred review by Publishers Weekly was described as “a dark night of the soul presented as the finest of evening gowns.”

When did being a writer begin to inform your sense of identity?
Writing has been an escape for me since I was a teenager, but an experience with grief illuminated the interaction between my life and work. My mother passed away unexpectedly in May 2011. As I attempted to write through that tremendous loss, my poems kept coming out as wild essays. Grief exploded my stanzas into paragraphs; there was just too much to be contained in the brevity of poems. So, I started writing essays. Even the poems I write now, formally, look and feel different. Those years showed me that there was no longer a clear separation between my life and my writing; they are each other. Who I am is what (and how) I’m writing.

Whose work would you like to steal without attribution or consequences?
Gabriel Garcia Marquez. I’m not sure I dreamed in color before I started reading Marquez’s work. His short story collection Strange Pilgrim and, of course, One Hundred Years of Solitude, among the rest of his work brought such richness to my dreams and nightmares.

Where is your favorite place to write?
At my desk in my bedroom with light streaming in through the windows. I need to be able to stare at the sky and the buildings. So many decisions about the next word or line happen when I’m staring out of my bedroom window.

Obsessions are influences—what are yours?
I’m obsessed with manhood as a brutal and artful performance. My mind always finds its way back to the crossroad where sex, race, and power collide. Journeys, transformation as well as dashed attempts to transform, fascinate me as well. Also, and this is a bit difficult to explain, but for about six years now, I’ve had a very clear image of a cabin at the edge of a vast, dark forest in my mind. My poetry collection Prelude to Bruise alludes to it in different ways. Part of me lives (or is trapped) in that cabin, I’ve decided. I’m obsessed with figuring out why.

What’s the most daring thing you’ve ever put into words?
There is a line in Prelude to Bruise in which I refer to my mouth as “dead woman”. When someone you love passes away, you wrap their memory in all of these polite, vague words. Writing those two words down—“dead woman”—was as painful and necessary as coming up for air after nearly drowning.

What is the responsibility of the writer?
To witness, to get as close to the truth as possible, to nurture each other as we step forward alone and together, to dive back into the sea again and again.

While the notion of the public intellectual has fallen out of fashion, do you believe writers have a collective purpose?
Our efforts, collectively, have to add up to a body of work our communities can use. No one writer can (or should) speak for an entire republic, but I’d like to think that we are all pieces of stained glass. For me, at least, that’s the point: to make a meaningful contribution to the broader body of work we read, share and pass on in the process of being human together.

What book would you send to the leader of a government that imprisons writers?
What Moves at the Margin: Selected Nonfiction by Toni Morrison.