The PEN Ten with Roxane Gay 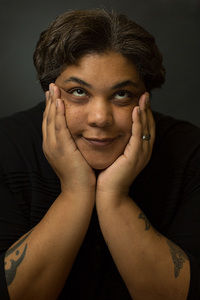 The PEN Ten is PEN America’s biweekly interview series. This week, Lauren Cerand talks to Roxane Gay. A fierce and masterful writer, cultural critic, and social media powerhouse, Gay writes with prodigious bravery about gender, sexuality, and race. She is the author of three books—An Untamed State, Bad Feminist, and the forthcoming Hunger.

Gay will deliver the Arthur Miller Freedom to Write Lecture on May 1 at 6pm. A conversation with writer and poet Saeed Jones will follow the lecture. The lecture is the PEN World Voices Festival’s grand finale, in which leading voices address critical free expression challenges. Named for the former PEN president and fierce defender of the freedom of expression, the Lecture has included, in past years, luminaries such as Chimamanda Ngozi Adichie, Justice Sonia Sotomayor, Orhan Pamuk, Umberto Eco, Nawal El Saadawi, Wole Soyinka, Colm Tóibín, and Salman Rushdie.

I don’t know that there is a specific moment when being a writer began to inform my sense of identity because writing has always been such an integral part of my identity. Writing isn’t my whole life but it is certainly one of the things that makes me happiest and best defines who I am.

On my couch, with Law & Order SVU on in the background.

I haven’t. I follow the law because the idea of using a jail or prison bathroom is far too much for me to handle.

I’m obsessed with the ways people are terribly human together.

The most daring thing I’ve put into words would probably be my essay “What We Hunger For,” where I talk about something from my past I don’t often bring into my nonfiction.

That is a difficult question. The responsibility of the writer is to write true, even when they’re telling lies.

I’d suggest that the public intellectual is very much in fashion. They simply work differently than in previous eras. Do writers have a collective purpose? I’m not sure, but what we do is write the world as we see it. We witness and record and remember and when we’re at our best, we instigate change, even if in small ways.

“They cannot take your words from you.”

The Autobiography of Malcolm X.