The PEN Ten with Rigoberto González 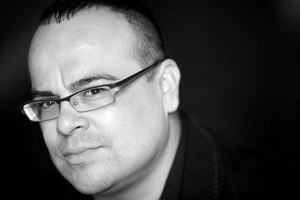 The PEN Ten is PEN America’s biweekly interview series curated by Lauren Cerand. This week Lauren talks with Rigoberto González, the author of thirteen books of poetry and prose, and the recipient of Guggenheim and NEA fellowships. He is contributing editor for Poets & Writers Magazine, on the executive board of directors of the National Book Critics Circle, and is associate professor of English at Rutgers-Newark, the State University of New Jersey. Last night he was awarded the Lambda Literary Award in Gay Poetry for Unpeopled Eden (Four Way Books).

Definitely during college, when I began taking creative writing classes at the same time I was reading books by Latinos—I had never known these books existed when I was in high school. Although, to be fair, I didn’t know writers were still alive. I thought all the books we read were written by dead people because most of them were. Anyway, reading Latino writers who wrote about family and Mexico and going to school made me realize that a person like me could become a writer, that what I experienced and imagine could be interesting enough to be published. It made me even more excited to continue writing and reading. Suddenly, this beautiful bridge.

We poets do this all the time and we call it borrowing or gleaning. No shame in that. It’s more like a badge of honor, and flattery to those we steal from.

I have my pretty little studio in Queens, where I can write, surrounded by Mexican folk art, without any disturbances. My friends call it “The Museum.” That desk has witnessed much heartache and also triumph. I spend so many hours working there that I had to replace my chair with an ergonomic medicine ball. It looks odd but it keeps me from slouching, which is how writers hurt themselves. I mostly write at night, when I can hear the faint voices of my memory with more clarity.

As a young activist I must have been arrested at least 8 times for civil disobedience. I’m not sure if there is even a record of all the arrests since the authorities simply corralled us into a bus and dropped us off at the police station, particularly when there were so many of us upstart college kids protesting. I come from a long line of activists. My grandparents and parents were members of the United Farm Workers Union so I was no stranger to strikes and picket lines and boycotts. I have photographs of me as a toddler walking with my family on marches. So when the opportunities came up in college to participate in political rallies, sit-ins and demonstrations, I couldn’t resist.

Pretty things are my obsession. Perhaps because I grew up in extreme poverty, I reach for the shiny things in real life—ties, shoes, cufflinks. Each becomes a kind of symbol for desire, my hard-won journey out of loneliness, dearth. As a writer, that struggle between absence and presence, between emptiness and sustenance, life and death, inhabits most of my work, no matter the genre. I’m a college professor who still carries that memory of a little boy who was denied that piece of cinnamon candy, that dazzling ruby. Such a small moment of understanding my place in the world still haunts me.

Since I write memoir, I have to be brave enough to reveal my most intimate moments when it’s necessary. Writing about sex was a difficult decision and process because I was taking “baring it all” to another level. But not only was I writing about sex, I was writing about gay sex, which came with its own set of risks. Nonetheless, I thought it was important to include those moments as part of my experiences as a gay man, otherwise I was only participating in the shaming of gay sex by keeping it invisible. There’s no time to be private or polite about such matters when there’s so much public rage and fear keeping the gay life marginalized. So I finally went for it, writing about picking up strangers at bars and coffee shops on the anniversaries of the date of my mother’s death. It’s an essay called “Orphans in the Terrorist World” in my latest book Red-Inked Retablos.

To build community. There are two ways a writer accomplishes this: by generating work that interacts with different groups of people for different reasons, and—in the age of social media—by interacting on a more informal plane, meting out advice, reading recommendations, becoming accessible as a fellow artist. Those who teach get to practice these exchanges in the classroom or in the office, but it’s a whole other vibe online with complete strangers. But meeting strangers is something that happens all the time when, as writers, we read across the country in cities we never knew existed until we arrived there. Online there a possibility for a more sustained relationship—for lack of a better word. In any case, there’s no excuse for being the hermit. People talk about protecting their writing time. I too would like to believe I’m so important, but I’m not. What I do in my role as an an artist, a thinker, a citizen—that’s important.

Absolutely. When I hear naysayers I also hear an anxiety against being polemic or political. This always astounds me. Writers in other parts of the world are incarcerated, persecuted and even executed for speaking up. No excuse not to participate in the important conversations of our time in our country. We have our own dangers and threats here, particularly when we hear conservative, close-minded loud-mouths distorting and corrupting the purpose and meaning of language. As writers, we need to push back by reclaiming the language as a conduit for intelligence, communication, creativity and imagination.

Observation is posing interesting questions. Surveillance is getting specific answers. Only one of those is meant to be used against the private citizen. The line, then, depends entirely on the purpose.

Proudly carry your banned books in our limited-edition #BannedBooksWeek tote bag! Every bag will go towards supporting PEN America's work advocating for authors, educators, and the freedom to learn: https://bit.ly/3nUYmlQ.

ICYMI: On #thePENpod, PEN America CEO @SuzanneNossel takes on the toughest questions about the past week in free speech. LISTEN 🎧 : https://bit.ly/3kBFG8x.