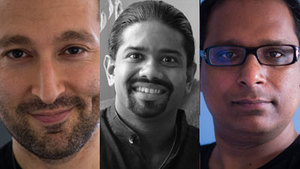 The PEN Ten is PEN America’s weekly interview series. This week, we talk with the team behind Priya’s Shakti, an augmented reality comic book and exhibition addressing gender-based sexual violence. Priya’s Shakti is a collaboration between poet and playwright Vikas K. Menon, artist Dan Goldman, and filmmaker Ram Devineni. The provocative story, whose genesis was inspired by the December 2012 gang rape and murder of a 23-year-old student in Delhi, portrays an Indian female “super hero” who fights against sexual violence in a Hindu-inspired mythic reality.

Devineni, Menon, and Goldman will be participating in Priya’s Shakti: Augmented Reality Comic Book and Exhibition at the PEN World Voices Festival. Ram Devineni will also be participating in Build Your Own Comic Workshop and On Ukraine from the Inside.

When did being a writer or artist begin to inform your sense of identity?
DG: In fourth grade, I had a tough time making friends when I started at a new school in Miami. All day I would draw these adventure stories during class featuring my original character The Cleaver, who was an obvious He-Man knockoff. Eventually the kids around me started noticing, and so I became “the drawer” who would draw favors for other kids. I made my first friends in the new neighborhood that way.

This lead to my very first solo art show (suggested by a very supportive art teacher) that featured fifty plus pieces in the elementary school cafeteria. Two days later, there was a massive food fight on chicken fried steak day and all my work was ruined, coated in gravy and peas and Kool-Aid.

Show me a more perfect “welcome to life as an artist, kid” moment.

Whose work would you like to steal without attribution or consequences?
VM: So many, but at this moment—Pablo Neruda and Wong Kar-wai.

When, if ever, is censorship acceptable?
RD: I believe in self-censoring, but not censoring others.

Obsessions are influences—what are yours?
VM: Sound, whether shaped by humans or not.

What’s the most daring thing you’ve ever put into words or images?
DG: I’m very proud of a kinky-filthy scene in Kelly, an experimental webcomic I was working on during 2007-09. Two gender-bent lovers trade violent “donkey punches” in order to hallucinate their way back to a “magical forest” that takes them out of the gentrifying New York City around them.

What is the responsibility of the writer or artist?
RD: Never be content.

While the notion of the public intellectual has fallen out of fashion, do you believe writers and artists have a collective purpose?
DG: Absolutely. Storytellers and artists serve as funhouse mirrors that show us versions of ourselves and the world, not as they are but as they could be. We point the way with whatever tools we have at our disposal to that place, as either invitation or warning or dream.

What book would you send to the leader of a government that imprisons writers or artists?
RD: The Giving Tree by Shel Silverstein.

Where is the line between observation and surveillance?
VM: It’s a line that would be very different for the observer and observed, I would think.