The PEN Ten with Rachel Rosenfelt 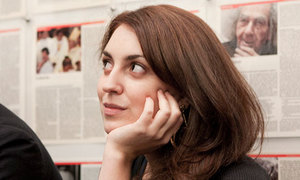 For me, it’s more that realizing my calling was not writing that I began to find my identity. I’d always been a talented writer relative to my peers and fostered a passion for ideas, which I believed to be best explored in the essay form. But as my sensibility developed, I began to see the wealth of untapped talent surrounding me both on and offline. I had the key insight that writing is not the only outlet for the expression of ideas and in fact, the many-faceted idea most stimulating me in the heart of the recession, student debt crisis, “death of print,” rise of digital media, Arab Spring and Occupy, could best find its voice in the form of a platform enabling the collective talent of others. From that came The New Inquiry.

I like to think that if I kept writing, my work would have some resemblance to Sarah Nicole Prickett’s. She’s getting better and better, so I’d even more jump at the chance to steal her work if we’re talking a lifetime proposition.

I don’t write, but if I did, I’d probably say…The New Inquiry.

I’ve never been arrested, but I’ve been reprimanded and lectured plenty enough.

I’m almost always avidly consuming whatever work I can get my hands on by angry, defiant and original women in literature, art and ideas. I’m going to get in trouble for saying this, but their ideology is less important to me than the pose they strike. I happily contain their multitudes.

I once tweeted that my neurologist is cash only. It was a scandal.

Nothing to no one.

Has it? I disagree. I think we’re witnessing a revival right now. I can’t say that all writers have a collective purpose, but collectives of writers might if they so choose.

Is a metal file a message?

I don’t know if a single book would have the power to persuade an authoritarian mind. Maybe Leaves of Grass if there’s some hope for their soul.

Join Rachel Rosenfelt in the fight to advance free expression. Become a Member of PEN today.