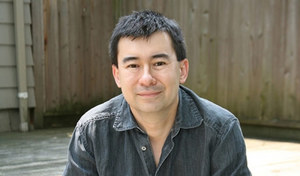 The PEN Ten is PEN America’s weekly interview series. This week, we speak to Peter Ho Davies. A writer of Welsh and Chinese descent, Davies has published the novels The Fortunes (2016) and The Welsh Girl (2007) and the short story collections The Ugliest House in the World (1997) and Equal Love (2000). His work has appeared in Harpers, The Paris Review, and the  Best American Short Stories series. Davies is a recipient of grants from the Guggenheim Foundation and the National Endowment for the Arts, and in 2008, he received the PEN/Malamud Award for Excellence in Short Fiction.

Probably from the first moment in my teens when I started to write for myself (i.e. not for teachers). That act feels in retrospect less like a discovery of identity than a (wishful) assertion of one in the sense that I wanted to claim the identity of a writer. That identity may have been appealing in part because I was variously torn in life between my father’s Welshness, my mother’s Chineseness, etc. I feel I began to write about my identity—and grapple with those inheritances—most when I moved to the U.S. from the U.K., partly perhaps thanks to the new perspective afforded by distance, but maybe also because of a sense of the sensitivity and receptivity to issues of identity in U.S. fiction.

No one’s! Is this a trick question? Even if I could do it without getting caught. I’d still know I’d stolen it, and quite apart from the ethics of that, it’d sort of defeat the point (and pleasure) of writing as personal expression. Of course, that’s not to say there aren’t many books I admire that I wish I’d written…but part of the pang those books evince is the knowledge that now I can’t write them. Nor is it to deny that I’m as influenced by books I’ve read as any other writer…but I like to think of influence not as stealing, but as a conversation, a response to those who’ve come before.

That would be telling! Part of the appeal to me of fiction is the cloak of deniability it provides, the fact that a story can be 1% invention and 99% autobiography and indistinguishable from one that’s 99% invention and 1% autobiography. The hiding in plain sight quality allows for moments of frankness and vulnerability—spaces to speak the unspeakable—that I cherish. Those seem the most daring moments to me, but to point them out seems to dispel some of their power. I think there’s a special engagement for readers, who naturally wonder about the truth or fictiveness within fiction, a kind of double-reading that I value.

When it’s self-censorship, perhaps. Writers decide all the time to not publish—often for the simple reason that they’re not happy with a piece of work, but perhaps also if they feel the writing is ethically problematic. What I try to resist is the self-censorship that stops us even trying to write something. That to my mind closes down the possibility too soon. The decision point comes after the writing, not before.

Truth. Or at least honesty—the telling of the truth as one sees it. But those can feel sweeping, even abstract, concepts. My version of it (today at least) might be: Empathic imagination extended to others as well as the self (which is to say a search for truth).

Writing is an exercise in individual expression and writers all, I think, yearn to say something distinctive, something previously unsaid. That perhaps mitigates against collective purpose, or at least agreement, but I do think there’s a shared urge to interpret and understand reality.

The implication is that a book might change such a leader’s mind, and I’m not sure I believe that, sadly…what I would like to do is send such a leader the work of one the writers he (or she) has imprisoned. Were I one of those writers I think it would be some solace to speak back to the person imprisoning and silencing me. I’ve little faith that such a leader would read such a book, mind you. My second choice would be to send a children’s book—not to change the leaders mind, but to inculcate the habit of reading in his/her children…

Observation feels like the activity of an individual. We all observe—writers especially, perhaps—it’s a large part of how we understand others, and the world. Surveillance to me seems more comprehensive, more intrusive, and more the activity of a group than an individual. People observe, organizations (states, say) surveil. There’s an imbalance. Individuals observe and are observed, but the individual who is surveilled is one, observed by an implied many, and likely unable to return a gaze that may well be secretive. Observation, in that sense, feels at least potentially mutual; surveillance seems one sided and implies an imbalance of power.