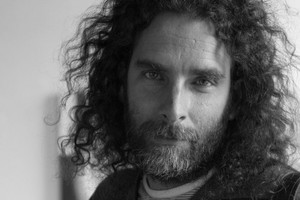 The PEN Ten is PEN America’s biweekly interview series curated by Lauren Cerand. This week Lauren talks with Orlando Luis Pardo Lazo, a photographer and writer from Havana, Cuba. Trained as a molecular biochemist, he has published Cuba in Splinters: Eleven Stories From the New Cuba (OR Books), and his new book, Abandoned Havana (Restless Books) is out this October. Orlando’s writing has appeared internationally, in Sampsonia Way Magazine, Diario De Cuba, CubaEncuentro, Penúltimos Días, All Voices, In These Times, Qué Pasa, and many other publications. He has compiled two anthologies of contemporary Cuban fiction translated into English and worked for the cultural magazine Extramuros as well as several independent Cuban digital magazines, including Cacharro(s), The Revolution Evening Post, and Voces. Orlando visits the United States to give university lectures about social activism and Cuban civic society using new media.

When did being a writer begin to inform your sense of identity?
I became a writer when I decided to lose all sense of identity. Writing is about erasing our own face with each fiction, to be aerial out of aesthetics. All that is solid melts into the air, no? It’s not to give voice to others, but to become the others. Half appropriation, half schizophrenia. Being an author as a kind of inverted autism. Limiterature…

Whose work would you like to steal without attribution or consequences?
Milan Kundera and William Saroyan. In fact, the novel “Alaska” that I currently write/writhe now, is to be Kundera’s first Cuban novel. Moreover, in Cuba I have already published a short-story book entitled “Mi nombre es William Saroyan” (My name is William Saroyan), which in 2005 won the Calendario Award of Abril Publishing House, in Havana. Even the back cover note of that book was written by Saroyan to me.

Where is your favorite place to write?
Alaska, again. The desert. The unknown. The wastelands. Any place where my imagination means nothing, where no return is conceivable. There’s no writing possible at home. Literature emerges from the irreversible. Literature is an orphan effect.

Have you ever been arrested? Care to discuss?
Yes. Thrice. November 2009, March 2012, September 2012. Sequestered in Castro’s Cuba by Cuba’s Castro: they are indistinguishable at the end of that bad lyric called The Revolution. With violence, but without charges or due documentation. Island of illiteracy, cannibal Caribbean. In the three cases, the political police also took the persons that walked with me at the time of each arrest. In the three cases, it was not for political but for prophylactic reasons. The State Security of Cuba’s Castro in Castro’s Cuba should belong not to the Ministry of Interior but to the Ministry of Public Health.

Obsessions are influences—what are yours?
Fidel Castro as the measure of all things. Why is it that no Latin American writer, after almost a century of tradition with the so-called “novels of the dictator,” has known how to deal with the figure of Fidel Castro? It must be not a historical but a politpornographical novel. Fidelity fuck-fiction. With whom and where and why and how was doing what the Maximum Body in Chief of Fidel Castro in each geopolitical or criminal context?

While the notion of the public intellectual has fallen out of fashion, do you believe writers have a collective purpose?
I do. There is nothing more political than literature. Reading is the real Revolution.

What book would you send to the leader of a government that imprisons writers?
“Das Kapital,” by the Cuban poet Carlos Alberto Aguilera, edited in Cuba in the last years of last century and millennium, printed by the publishing house of the Youth Communist League. Carlos Alberto Aguilera is now living in exile, as he definitely deserves.