The PEN Ten with Monique Truong 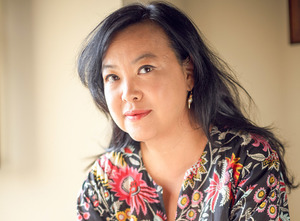 The PEN Ten is PEN America’s biweekly interview series curated by Lauren Cerand. This week Lauren talks to PEN/Robert Bingham Award recipient Monique Truong, author of the novels The Book of Salt and Bitter in the Mouth. She serves on the board of directors of The Authors Guild and is an intellectual property attorney.

I kept a diary in an orange spiral notebook when I was in the fifth grade. It was full of nonsense and complaints. I would store them up throughout the day and deposit them there: my crushes, my hurt feelings, my specific growing pains. It was certainly not the content of the diary that gave me the sense of being a writer. It was the act of keeping a diary and how it made me feel. I had an outlet, a repository, and I felt less alone.

Here’s a partial list of things that I’ve stolen, mostly from restaurants, mostly before I was 20: rolls of toilet paper, saltshakers, and coffee mugs.

I offer this to you because you’ll be disappointed (perhaps) in my response to the actual question: I would never steal another writer’s work. Never. If I ever did (or even considered it), I think it would mean that I’ve given up on my own writing because isn’t THAT what it means to be a writer who plagiarizes? You steal because you believe that that you’re incapable of doing better.

I can always do better. That’s my mantra.

There’s a tremendous writing residency for women on Whidbey Island (Washington state) called Hedgebrook. I’ve worked on both of my novels there. Each writer gets her own A-frame cottage tucked into the woods. Each cottage has a beautifully painted, rounded top, wooden door. I feel like a feminist Hobbit when I’m there. I also feel entirely cared for and safe. In this calm and in this beauty, I’ve written without fear.

Also, it’s a room (cottage) of my own. I can sing at the top of my voice and no one will hear. I do that sometimes. I sing when I write.

No arrests. I do carry in my wallet and in my cell phone the contact info for my friend (from my previous life as an attorney) who’s now a federal magistrate judge in the Eastern District of New York. You know, just in case.

I’m obsessive about food. I love what’s on the plate, but that’s not what I’m interested in as a writer. I find the ritual of cooking and eating, the secret language of dishes and ingredients, and the thin line between labor and exploitation endlessly fascinating.

My father’s eulogy. Because it was truly the first time that I understood that there was a context in which my words were absolutely useless and without power. The words couldn’t bring him back. They couldn’t be heard by him. They couldn’t ease my sorrow. I couldn’t imagine how they could ease anyone else’s. I wrote them anyway, even though I knew that they would fail.

Not to be a peddler of clichés, stereotypes, the banal and the trite. To write the opposite of propaganda.

The first-person narrator is a laborer from India who travels to an unnamed Gulf country to find work. What he becomes there is a modern day slave. Taken into the desert, given no explanation, deprived of recourse and rights, he struggles daily to maintain his sense of being a human. The main character is an ordinary man, but it’s his captivity and his survival that makes him into an extraordinary one.

Surveillance is when fact-gathering crosses over into obsession and irrationality.

Open books, as they always have, open doors.
We proudly share this message alongside our partners: @PRHSecondaryEd, @PENamerica @ncte @ncacensorship @LibraryJournal and @FReadomFighters
Pick up the May issue and the poster at #alaac22 booth #1046 #FReadom