The PEN Ten with Metta Sáma 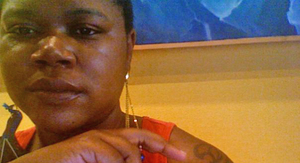 The PEN Ten is PEN America’s weekly interview series. This week, guest editor Nicole Sealey talks to writer Metta Sáma, who is the author of After After/After “Sleeping to Dream” (Nous-Zot Press), Nocturne Trio (YesYes Books), and the forthcoming le animal & other strange creatures (Miel Books). Poems, stories, and essays have been published or are forthcoming in The Rumpus, The Baffler, Rædleaf Poetry, Entropy, Transitions, Dismantled Almosts Anthology, Heir Apparent, All About Skin, The Feminist Wire, and others. Sáma is the director of both the Creative Writing Program and Center for Women Writers at Salem College, where she is also Assistant Professor of Creative Writing.

No one’s! I actually find the whole “great artists steal” idea to be a crock of bullshit. Great artists always attribute; “[we’re] sensitive about [our] shit,” as Erykah Badu said, so we’re sensitive about having our work taken away from us, re-hashed, sampled, pulled out of context, used up, etc. No one wants to be robbed/mugged of their style, form, language. That said, I borrow freely, wisely, and when I have the time & the chops, I’ll borrow that “Whereas” form of Layli LongSoldier’s for a book-length project I want to do on Brown v. Board of Education.

I enjoy writing anywhere where I can be physically naked, public parks, my living room, bathtub, bed.

Hasn’t everyone!? Yes, I’ve been arrested. I don’t recall why I was pulled over, speeding maybe, I speed, or maybe driving on a busted taillight, I often have taillights out, but no, it was daytime, so that wasn’t it, whatever it was I was arrested after they entered my info. They called my parents to secure my car. I’ll never forget it. My mom & dad showing up. Me in the backseat of the cop car. Handcuffed. My mom’s anguish. My face, dead. My mom’s anguish turning to outrage at my deadened face. I was a grown ass woman and my parents were about to bail me out of jail for writing bad checks. The child they always feared would be jailed for protesting at this or that rally, for being in the center of every activism. In jail for writing bad grocery store checks. At the jail, I tried to formulate some poems. I was new to writing poetry, so in that early, narrow phase where a poet only sees herself as a poet & tries to make every experience in the world a poem.

The responsibility of this writer is to be ethical, conscientious, non-judgmental, curious, free free free.

I would send the written work of every person who has been unjustly imprisoned/has had family members/friends unjustly imprisoned & has written about their experiences, writings by Anna Akhmatova, Oscar Wilde, Martin Luther King, Jr, Nawal el Saadawi, Ngugi wa Thiong’o, for example.

Poets Metta Sáma and Timothy Liu will read from their most recent collections and then participate in a moderated conversation with Cave Canem graduate fellow zakia henderson-brown at The New School’s Wollman Hall on September 16, 2015, at 6:30pm. Visit Cave Canem’s full calendar here.

Nicole Sealey is the Programs Director at Cave Canem Foundation and the author of The Animal After Whom Other Animals Are Named, winner of the 2015 Drinking Gourd Chapbook Poetry Prize, forthcoming from Northwestern University Press. Her honors include an Elizabeth George Foundation Grant, the Stanley Kunitz Memorial Prize from The American Poetry Review, a Daniel Varoujan Award and the Poetry International Prize. Her work has appeared in Best New Poets, Copper Nickel, Ploughshares, Third Coast, and elsewhere. Nicole holds an MLA in Africana Studies from the University of South Florida and an MFA in creative writing from New York University. Nicole will be interviewing a distinguished and diverse group of Cave Canem fellows and friends. Visit her at nicolesealey.com.

PEN America has joined @POMED, @hrw, and other human rights groups in calling for the Biden administration to investigate Egypt's role in the murder of Saudi journalist and U.S. resident Jamal Khashoggi. See our statement here: https://bit.ly/3vSegh6.

Join PEN America, the Project on Middle East Democracy (@POMED), and members of Turkey’s cultural, artistic, and literary communities in discussion of these trends and recommendations on how policymakers might respond to Erdoğan’s campaign of repression. https://pen.org/event/cracking-down-on-creative-voices-turkey/

We’ll be announcing the 2021 Firecracker Awards winners live at The Center for Fiction this evening! We’d love to see you there: https://centerforfiction.org/event/the-clmp-firecracker-awards/