The PEN Ten with Marlon James 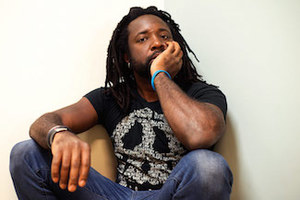 The PEN Ten is PEN America’s weekly interview series. This week, we speak to Marlon James. His most recent novel, A Brief History of Seven Killings, was the winner of the 2015 Man Booker Prize, as well as the American Book Award, and the Ansifield-Wolf Book Award for fiction. He is also the author of the novels John Crow’s Devil and The Book of Night Women. Born in Jamaica, he now lives in Minnesota.

Marlon James will be participating in Opening Night: The Drug Edition on April 25, Country of Nowhere: The Refugee Crisis on April 26, and Expats on April 27 at the PEN World Voices Festival.

Not until after my second novel, in 2009, when somebody asked me what I would be doing if I wasn’t writing. I couldn’t answer the question. I still can’t answer it. I don’t think there’s anything else.

It’s a toss up between Toni Morrison and Gabriel García Márquez for the beauty and the daring of their prose. In many ways Márquez is to me a Caribbean writer, in fact he said so himself. For Toni Morrison, there were two books: Song of Solomon inspired me in terms of subject matter and how I write, particularly how I write female characters; Sula changed the way I saw myself in the world. I think about the scene on Sula’s deathbed:

“…I know what every colored woman in this country is doing.”

“Dying. Just like me. But the difference is they dying like a stump. Me, I’m going down like one of those redwoods. I sure did live in this world.”

“Really? What have you got to show for it?”

When I read that, I realized I didn’t need to validate my life to anybody, and that was a pretty major moment in my life.

That alone is the opposite, not the absence, of company. That, and the murder of a pregnant woman in a crack house.

Censorship is never acceptable. The whole idea of censoring for the greater good makes a huge assumption that you get to tell me what’s good. That’s deeply patronizing and paternalistic. So it’s never good. That said, I do think there’s a difference between censorship and blocking your access to making money.

I think this is a distinction that Americans in particular tend to blur quite a bit. If I push you to get a warning label on your record because you’re singing about having sex with your parents, I’m not censoring you. I’m just blocking your avenues to making money. Censoring you would inhibit your freedom of speech—blocking that record from being made in the first place. I think there’s a difference between those two things. We can talk about why you shouldn’t block people’s avenues to making money, that’s fair, but it’s not censorship.

I can take people to some regimes to see what censorship looks like.

I’m not sure writers have any responsibility. That’s almost like asking, what should the writer do? There’s no such thing as “should” with a writer. If I say a writer has a responsibility to speak truth about the world, are they shucking their responsibility if they don’t? If a poet talks about personal space, or cats for that matter, are they ignoring their duty to the world? I think the writer’s responsibility is to get whatever it is in his head down on the page.

I have two offices and I write in neither of them. I actually like to go to cafes, where I’m usually in a corner, preferably with no internet because if there’s internet I will use it. My absolute favorite place to write is this French café in Miami called A La Folie, where I wrote the first hundred pages of my last novel.

Writers do have a collective purpose, and that’s to write. I think we writers have managed to convince ourselves that that’s not enough. Why is that? Writing can actually change this world. And if you’re a writer, you should get up in the morning and go. So a writer’s purpose is to write. If we’re talking about speaking truth to power, there are not a lot of people doing it in prose. And in some areas of the world, when they want to kill free speech, it’s the prose they kill first. It’s the newspapers they co-opt first, like what’s happening in Turkey. It’s the books they burn first. And in many places, writing is still a privilege, or it’s done secretly, or it’s considered a subversive act to simply write about something you love. So, what is a writer’s collective purpose? To write.

It depends on whose eyes are doing what and the power and intention behind those eyes. As a writer, I observe quite a bit, but I observe to the point where I am able to invent stories and fictions. Observation becomes surveillance when you’ve entered personal space, without permission, for your own interest. So much of it also depends on who’s doing the observing. A six-year-old following you around can be pretty weird, but that’s observation—that’s deep observation. That’s probing observation because six-year-olds want to know everything. But if an authority figure observes every aspect of your life—that’s surveillance and they’re invading your privacy. Human rights always disappear with consent, though. Next thing you know, we’ll all be in the film Minority Report.