The PEN Ten with Mark Binelli 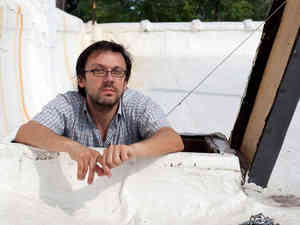 The PEN Ten is PEN America’s new biweekly interview series curated by Lauren Cerand. This week Lauren talks to Mark Binelli, author of Detroit City is the Place to Be: The Afterlife of an American Metropolis.

Probably from the moment I had something published—my high school newspaper? Although I think writing didn’t so much “inform” as “justify” my sense of identity, allowing me to freely indulge in certain antisocial tendencies (introversion, voyeurism, possibly unhealthy love of solitude) already present.

Nabokov. For his language, of course. I could choose lines I’d love to swipe more or less at random, but here’s a perfect paragraph from Speak, Memory, his autobiography, in which he describes being inspired to make his first attempt at verse:

A moment later my first poem began. What touched it off? I think I know. Without any wind blowing, the sheer weight of a raindrop, shining in parasitic luxury on a cordite leaf, caused its tip to dip, and what looked like a globule of quicksilver performed a sudden gissando down the center vein, and then, having shed its bright load, the relieved leaf unbent. Tip, leaf, dip, relief—the instant it all took to happen seemed to me not so much a fraction of time as a fissure in it, a missed heartbeat, which was refunded at once by a patter of rhymes: I say “patter” intentionally, for when a gust of wind did come, the trees would briskly start to drip all together in as crude an imitation of the recent downpour as the stanza I was already muttering resembled the shock of wonder I had experienced when for a moment heart and leaf had been one.

There’s a small library in Manhattan I’ve become very partial to, but I’m afraid I can’t reveal that location. (Spots so quickly get blown up here!) The café at Housing Works Bookstore is also terrific, if I’m at a stage of a project where I don’t need absolute silence. And of course the Rose Reading Room at the 42nd Street branch of the New York Public Library.

I’m typically most obsessed by whatever I happen to be writing about—so for years, that was Detroit, and before that, while I was researching my novel, it was Italian anarchists and slapstick comedy teams. Though I love the way magazine assignments allow me to obsess in shorter, more intense bursts; recent obsessions in that regard have included right-wing Kansas politics, Vladimir Putin, Tibetan Buddhism, and light pollution.

In Rolling Stone, I once confessed my love of the Paul McCartney disco song “Goodnight Tonight.”

For some reason, I answered these questions in reverse order. So, see below.

I’m not sure. As a writer, I shy away from the notion of “collective” anything. Other than “write well,” I think writerly purpose should be fairly idiosyncratic. One of the great pleasures of reading is the ability it affords us to peek inside the heads of fellow humans, in all their flawed and glorious diversity.

I’m not sure I could personally answer this question without resorting to platitudes. I did just have the opportunity to spend some time with a couple of the members of Pussy Riot, and the message they seemed to want to send to their imprisoned bandmates, and to the world, was—and I’m paraphrasing—“We’re still out here fighting. And we’re not afraid.”

The Leopard, Giuseppe di Lampedusa—a brilliant meditation on impermanence and human folly, set during the twilight of the nobility in post-unification Italy. I’d force my captive audience to pay special attention to the book’s final lines, which I won’t quote here—no spoilers, even for despots!—but which involves a (briefly) reanimated family pet, and which should remind them of their own inevitable end, “in a heap of livid dust.”

Join Mark Binelli in the fight to advance free expression. Become a Member of PEN today.