The PEN Ten with Lauren Beukes 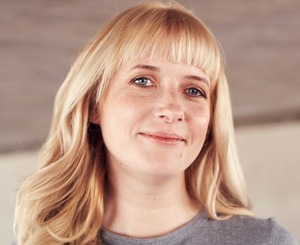 An unstable, failed artist makes his visions come to life at the cost of living humans. A time-traveling murderer finds one victim he can’t overwhelm. These are just a few of the things that author Lauren Beukes covers in her enthralling and immersive fiction. Stories that not only entertain, but creep into and envelop you.

Beukes’s novels—including her most recent work, the chilling, subversive Broken Monsters, which boasts an ending that would make Stephen King jealous—aren’t easily categorized. Nor should they be. They deftly bring readers into carefully crafted worlds that hold real, honest menace, even while traipsing into the supernatural and fantastical. Like many of the writers being spotlighted in the PEN Ten series, Beukes writes with a voice that is hers alone—strong, genuine, and hard to ignore. It was a pleasure to chat with her.

When I was five years old and I found out that making up stories was a viable career path. I used to tell people, very precociously and annoyingly, that I was going to be an “au-thor.” It’s all I ever wanted and it’s taken me a long time to get to a place where I can do it full time and make a living. I think my five-year-old self would be pretty stoked.

Jennifer Egan’s. I would like to eat her brain and absorb her powers.

Upstairs, at my standing desk on my enclosed balcony with a view over Table Mountain and a picture of a girl eating her heart above me, which is what the writing process feels like, often. Alternately, in a coffee shop with no Wi-Fi; or at the kitchen table, which is conveniently close to the essential writing fuel of coffee and snacks; or in a shared studio space, which I’m looking into again now that I’m not on a crazy tour schedule for the next year.

Nope. I was too young to be an anti-apartheid activist, which I’ve romanticized in my head, because the enemy was a simple one—an evil racist regime that ruthlessly and violently oppressed most of the population. I know people who fought the apartheid state, who spent months in solitary confinement, who trained in Rwanda, who can’t visit the U.S. now, because they have a criminal record as a “terrorist.” I’m glad I avoided that and I wish our current social issues were as easily defined and that there was a clear path of resistance.

Psychogeographies; how we’re haunted by history, social issues, racism, sexism, and the fractures of society; where violence comes from; and how we deal with who we are and the mistakes we’ve made. Influences include African mythology and Russian fairytales, Margaret Atwood and Alan Moore, Jeff Noon and William Gibson, Dragonlance and ElfQuest and 2000AD and Roald Dahl.

The most daring thing I’ve wanted to put into words was vetoed by my editor. I wanted to describe my terrified heroine’s heart thumping “like an avalanche of ponies.” I still like the metaphor. Can’t you just see it? The ponies tumbling down the scree, all clattering hooves and dust? But the hardest thing to write, which still upsets me and makes me sick and angry, was the essay I wrote, “All The Pretty Corpses,” about the murder of my cleaning lady’s daughter in 2010 and how I believed in the fairytale of justice until the moment in the prosecutor’s office when he told us he was going to have to throw the case out. It was devastating, and it has fed into how I write about violence—what it is, what it does to us, how we talk about it, what it means when we lose someone, how violence is shocking and contemptible, how we shouldn’t let this shit go.

To try and parse some aspect of the world through story, to ask hard questions, which you don’t necessarily have the answers to, but which you can explore through your fiction. I joke that some people go to see psychologists, but I get my issues out on the page and make it my readers’ problem.

Has it? Not judging by the excellent op-eds I see by writers like Margie Orford talking about violence in South Africa, or novelists like Daniel José Older and Junot Díaz getting involved in the politics of the Dominican Republic deportations recently.

Country of My Skull by Antjie Krog, about the Truth and Reconciliation Commission in South Africa and how we need to be able to tell our stories to be able to confront them, to deal with them.

Yes, absolutely. Good fiction should be, whatever its genre. I write with fire in my gut (although it could well be indigestion from too much coffee) and the things I’m angry about will make it into the story, whether that’s slut shaming, or vigilantism, or who we are on the Internet.

Guest editor Alex Segura is a novelist and comic book writer. He is the author of the Miami crime novel Silent City, the first in a series featuring Pete Fernandez. Silent City and its sequel, Down the Darkest Street, will be out via Polis Books in 2016. He has also written a number of comic books, including the best-selling and critically acclaimed Archie Meets KISS storyline, the “Occupy Riverdale” story and the upcoming Archie Meets Ramones. A Miami native living in New York with his wife, Segura will be interviewing a number of crime and genre-bending fiction authors for The PEN Ten.