The PEN Ten with Jean Guerrero 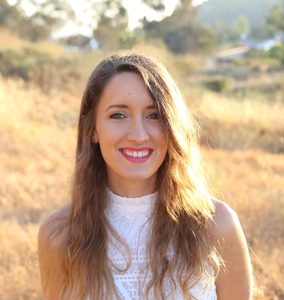 In this week’s PEN Ten interview, we speak to 2016 PEN/FUSION Emerging Writers Prize winner Jean Guerrero, Fronteras reporter at KPBS, where she covers immigration and other border issues. Her manuscript, “Crux,” is a cross-border memoir about a young American’s quest to understand her Mexican father.

Underwritten by FUSION television network, the PEN/FUSION Emerging Writers Prize is an annual award, conferred for the first time in 2015, to recognize a promising writer under age 35 for an unpublished work of nonfiction that addresses a global or multicultural issue. The award carries a $10,000 purse to assist the winner in continuing his or her literary endeavors.

When did being a writer begin to inform your sense of identity?
I stopped enjoying my birthdays once I hit the double digits (i.e. 10 years old) due to aging- and death-related anxiety. Writing appeared to be the only antidote. I intuited that recording my life on the internet would give me a degree of immortality. This was before Facebook or Myspace, so I turned to LiveJournal, DeadJournal, Xanga, and other online diaries, typing every banal detail of my existence for two to three hours every evening. My mother would get angry because I was often late to dinner. As soon as I realized I could not liberate myself of this addiction—in middle school—I thought of myself as a writer.

Whose work would you like to steal without attribution or consequences?
Vladimir Nabokov, because he can make readers sympathize with even the most hideous of characters—the pedophile Humbert Humbert, the art critic Albert Albinus, the clingy Charles Kinbote—due to his total aesthetic mastery of language. He creeps inside the heads of monsters, then makes our spirits soar. Nabokov was a lepidopterist—a butterfly expert—and I hypothesize that this helped him discern the specific ways in which disgusting little worms can reach great heights and also be beautiful. If you asked me why I find this specific writerly skill so impressive, though, I couldn’t tell you.

Obsessions are influences—what are yours?
I love horses and used to ride competitively in the hunter/jumper style, which is all about form and aesthetics: the arch of the rider’s back, the stillness of her leg, the curve of the horse, the smoothness of its gait, the tuck of its front legs over a jump. If I were a psychoanalyst I would say that my passion for making powerful beasts do my bidding is somehow related to my admiration for Nabokov’s alchemy.

What’s the most daring thing you’ve ever put into words?
For a KPBS piece that aired on PBS NewsHour, I wrote about homeless migrants who hide from police in Tijuana’s sewers, which required running across highways to enter underground tunnels with crowds of men deemed criminals and drug addicts. That made me feel quite venturesome.

When, if ever, is censorship acceptable?
Censorship of others is a form of violence. It is unacceptable unless the speech or information flow would somehow lead to worse violence. I think self-censorship is acceptable if it’s meant to avoid causing offense, so long as the desire to avoid offense is rooted in empathy, not fear or insecurity. Even as an over-sharer, I often find myself censoring myself. I think it’s the curse of my gender. I’m afraid of sounding stupid or wasting other people’s precious seconds and air with my opinions. The women in my newsroom are always asking each other to speak up, to speak louder, to take up more oxygen with their words. It’s refreshing. In general, I think true words should flow freely. The more truth we have, the more evolved we can become.

What is the responsibility of the writer?
To strip the world naked. To expose the flaws of our collective body. To venerate the beauty of that body.

While the notion of the public intellectual has fallen out of fashion, do you believe writers have a collective purpose?
I believe humans have a collective purpose—to find meaningful truth—and writers create maps out of words, as painters and photographers and filmmakers make maps out of images, and musicians make maps out of harmonies. Because language and logic are so interlinked, I think wordsmiths often tend to see their art as the most lofty and useful in the search for truth. But I think empathy and intuition are types of knowledge that are just as important as logic, and those have more to do with light and color than letters. Writers who can stretch the capacity of language to embrace illogical truths have a collective purpose: to increase our well-being as a global society and our capacity for collective understanding. Increasingly, those are writers from mixed or minority backgrounds.

Have you ever been arrested? Care to discuss?
I have never been arrested, but I was hospitalized against my will as a teenager on what’s called a 5150 in California. It was all a big misunderstanding; I was not in fact suicidal.

What book would you send to the leader of a government that imprisons writers?
I would send him, “Anne Frank: The Diary Of A Young Girl.” If he had a daughter, he might see her in Anne, and realize that writing can be the greatest gift.

Where is the line between observation and surveillance?
A person with extrasensory perception (if it were a real thing) would not detect being observed, but would detect being under surveillance.