The PEN Ten with Je Banach 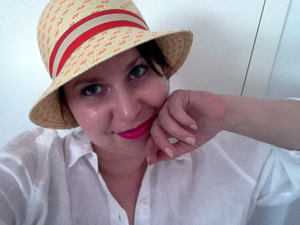 The PEN Ten is PEN America’s biweekly interview series curated by Lauren Cerand. This week Lauren talks to Je Banach, a member of the residential faculty in fiction at the Yale Writers’ Conference, and a 2013 Connecticut Artist Fellow for Fiction. A long-time contibutor to Harold Bloom’s literary series with Infobase Publishing, Banach has also written for The Paris Review, Esquire, Granta, Guernica, and Bookforum, among many other publications.

Well, before being a writer informed my identity being a reader did, and I have always loved to read. It seems to me that writing begins to inform your identity the moment you set pen to paper, but I think that it really began to have a gargantuan impact when I began to practice it without being asked. On my own, outside of a classroom, when it was inconvenient or difficult and done without any prodding or any promise of reward. I remember sending work to The New Yorker as a teenager. In my workshop at the Yale Writers’ Conference, we talk about the transition from thinking about being a writer and wanting to be a writer to actually being one—from dreaming of what you want to be to being it. The essence of being a writer really lies in that movement from thought to action. So much relies upon that.

Even with this fantastic permission you would be granting me, I don’t think I’d ever be interested in stealing anything whole. First of all, I’m absolutely awful at committing to “favorites” of anything, so I’d probably be unable to choose. But also, I don’t think there would be any satisfaction in it for me. Doesn’t all of the satisfaction come from knowing the words are yours? I don’t know that I’ve ever read another writer’s work and actually wished it were my own, only perhaps that I could accomplish with my own work something they had already accomplished with theirs or elicit feelings from a reader just as they had so deftly elicited them from me.

At home. On the couch. Of course that isn’t always possible and the words don’t always come when you wish they would, so sometimes I am writing in a car instead or from my bed in the dark or inside a library or a coffee-shop. Sometimes I am trying to get something down while standing up in the middle of a crowd. These less convenient writing places make me appreciate a couch at home.

I have never been arrested. And yet I’m mindful that there are certainly words I have written that would not be tolerated elsewhere. What amazing freedoms we have here. Don’t you agree? We need to maintain them.

Thinking critically seems to actually be the biggest obsession of mine. I don’t mean by that thinking in terms of good or bad, but thinking deeply and questioningly and without relent–the kind of thinking that encompasses what some would refer to less affectionately as “overthinking,” “future-tripping,” and “spinning one’s wheels.” This may be a good obsession for someone with a career in writing and intellectual work, but it doesn’t always translate as well in one’s personal life! I can assure you: if I have any other obsessions, they do not even come close to touching this one. I do have many, many varied interests, however. Maybe one of those will bloom into something.

My most daring words are still ahead of me, I’m sure. In the meantime, I’ve written quite a few words about the daring words of others. I’ve written many publishers’ guides to banned or otherwise “controversial” works. I wrote a piece for PEN in which I reflect upon my experiences writing about these works. Sometimes we take for granted our freedom to speak openly about books and our intellectual predilections and interests, but if you consider the state of affairs globally and even the history of freedom within the United States, you quickly remember that this is not a universal or guaranteed freedom. Writing may be courageous, but reading and speaking about what we read are also courageous acts. The discourse we create when we talk about books is daring just as a book itself may be daring.

To write. To do his or her best at it. I think one at least ought to do that if they wish to call themselves a writer. Though I wonder if the latter isn’t truly a responsibility to one’s self?

Has it? Let’s bring it back! Don’t they say that everything that goes out of fashion comes back again? Really, I think that the public notion of the intellectual may have fallen away, but the public intellectual has not. If there is a collective purpose it is probably to keep alive the written word and the human story, to witness and reveal and invent and reflect.

I think I’m borrowing from Vonnegut when I say that we would need to go back in time to when that person was a child and give them many books.

What is interesting to me is the close etymology of these two words. Both have roots in language that means “to watch” or “to watch over.” Yet our reception of these two words has come to differ substantially. Would you rather be observed or surveilled upon? One might be perceived as unobtrusive—permissible even, while the other, for many, has come to represent an intrusion. The contemporary interpretation of one has come to be tied to an (often self-appointed) authoritarianism and to the loss of liberties. It is amazing to me how much a single word can contain, how much it can carry along with it.