The PEN Ten with Eric Bogosian 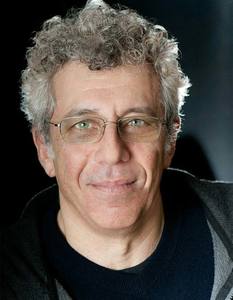 This week, we talk with Eric Bogosian, an actor, playwright, and novelist of Armenian descent. He was a Pulitzer Prize finalist for his play Talk Radio, and is the recipient of the Berlin Film Festival’s Silver Bear Award, as well as three Obie Awards and the Drama Desk Award. In addition to his celebrated work in the theater and on screen, he has authored four novels. He is the author of Operation Nemesis: The Assassination Plot that Avenged the Armenian Genocide, to be published by Little Brown and Company in April 2015. He lives in New York City with the director Jo Bonney.

Eric Bogosian will be participating in the event Armenian Genocide: A Dark Paradigm at the PEN World Voices Festival on Wednesday, May 6.

When did being a writer begin to inform your sense of identity?
It’s more a matter of when did being a reader inform my sense of identity. As soon as I learned to read (at the age of six?), I began to haunt the library. I read everything I could lay my hands on. In my teens, books were the gateway to deep, complex worlds. I devoured Dickens, Hesse, Kafka, Steinbeck, even Joyce, before graduating from high school. I decided I would be “a writer,” but I had no craft and no working method. I came from a blue-collar town and moved to Hyde Park, Chicago, without having written so much as a paper. For me, “being a writer” was an aspiration but I had little to show for my ambition. I was like a street stickball player who dreamed of the big leagues. Years later, in New York, as someone who wanted to make theater, I taught myself how to write. First I wrote monologues, then full-length plays, then long fiction. Though writing takes up most of my time, I still don’t think of myself as a writer.

Whose work would you like to steal without attribution or consequences?
I would love to be able to write narrative like V.S. Naipaul. I wish I had the skill to describe the texture of the world the way Updike did. Beyond that, I’m sure I steal all the time without knowing it.

Have you ever been arrested? Care to discuss?
I was arrested for smoking dope in a mall parking lot when I was 17. I was on LSD at the time. Handcuffs and jail cells are not psychedelic.

Obsessions are influences—what are yours?
I gravitate toward the same topics everyone else does: sex, violence. Motivation is what interests me. I am fascinated by the fact that humans are self-reflexive organisms. It is in everyone’s nature to think of him or herself as “special” when there is little evidence of that. We are more alike than not alike.

What’s the most daring thing you’ve ever put into words?
Whenever I describe love and obsession, I feel vulnerable. My second novel Wasted Beauty is built on obsession and guilt.

What is the responsibility of the writer?
To participate in the greater project, which is to say, to be aware of what other artists around you are doing. Our work exists in a context.

While the notion of the public intellectual has fallen out of fashion, do you believe writers have a collective purpose?
Mass media dictates the terms of discourse. Long-form writing has become ghettoized. I relate to it, but will my children? We are no longer living in an era of the printed word radiating outward from author toward readers. Words come in short bursts, ideas ping-pong, thinking itself has become collective. The group thinks together. Sometimes this is good.

What book would you send to the leader of a government that imprisons writers?
Prison No 5: Eleven Years in Turkish Jails by Mehdi Zana. Zana is a prominent member of the Kurdish community who was repeatedly imprisoned in the ’80s and ’90s. His story is horrifying and reveals how terribly the Kurds have been treated by their government.

Where is the line between observation and surveillance?
This is not a question I have an answer to.