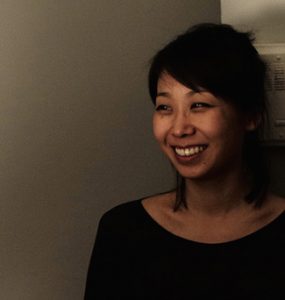 Tammy and I first got to know each other when she became one of our first Open City Fellows at the Asian American Writers’ Workshop, for which she wrote about gentrification, immigration, and labor around Chinatown. She wrote a heroic piece about the battle for affordable housing in the Seward Park Urban Renewal Area that won her an Ippy—and also interviewed Asian undocumented dreamer activists like Lis and Jeff.

Growing up in a working-class immigrant household in Tacoma, WA, Tammy formerly worked as an attorney at the Urban Justice Center and as a staff writer for Al Jazeera America, where she wrote an incredible profile of the great L.A. writer Sesshu Foster. A contributor to The Nation, The New Republic, and Dissent, Tammy currently works on the editorial staff at The New Yorker. You can check out her writing at etkwrites.tumblr.com and follow her on Twitter at @etammykim. And watch for a forthcoming book Kim edited with Michael Veal, Punk Ethnography: The Sublime Frequencies Companion, a ground-breaking case study that examines record production as ethnographic work and profiles the Seattle-based world music label, Sublime Frequencies.

When did being a writer begin to inform your sense of identity?
I suppose I do identify as a writer, though I usually call myself a journalist or reporter—labels with a slightly humbler, workaday sheen. I strongly identify as a researcher and reader; these activities terrify me less than writing.

It’s a privilege to produce words for a living, something I hadn’t thought possible for a working-class immigrant kid. I complain all the time about blank-screen terror, knowing full well how ridiculous it is. For the last couple of years, I’ve kept a large Post-it note on my newsroom monitor: “You said you wanted to write for a living, so shut the fuck up and do it.”

Whose work would you like to steal without attribution or consequences?
This list is long. Really, really long, notwithstanding my limited exposure. But here are a few: Elaine Scarry, Joan Didion, Franz Kafka, James Wolcott, James Baldwin, Janet Malcolm, Elijah Anderson, Julie Doucet, Tracy K. Smith, Mary Karr, and the Korean courtesan poets.

Where is your favorite place to write?
It’s rather excruciating wherever it takes place, but I do love to write in public libraries. I also yearn to write more in nature—well, mediated nature: in my parents’ camper, looking out over a wintry beach or a campground.

Have you ever been arrested? Care to discuss?
I have no brave or harrowing tales to offer.

Obsessions are influences—what are yours?
Blame the Pacific Northwest upbringing and elementary school leap into vegetarianism, but I’m fairly obsessed with my environmental footprint. This means traveling with Tupperware, no takeout or delivery, religious composting, a constant battle against vampire energy, water-rationed dishwashing, etc. I think about garbage constantly: how much I’m creating, where it goes, what it’s like to have to pick through it for a living.

What’s the most daring thing you’ve ever put into words?
This is something I’m working on, being brave in print. I’ve written a few personal essays, which I think might be courageous and not merely confessional, but the jury’s still out.

What is the responsibility of the writer?
In my class at Cooper Union this semester on “The Global Worker,” I’m having the students read political scientist Iris Marion Young’s paper on political responsibility. She uses this concept to explain why the transnational demands of United Students Against Sweatshops and other such movements make sense. Consumers who buy cheap T-shirts aren’t “liable” for exploitative conditions in the garment factories of Bangladesh, Young writes. But they (we) do bear a “political responsibility” by dint of living in a global community. Our $3 pants have an origin story.

Writers are people, so we have political responsibilities that zigzag across the globe. If we are good at our craft, we have the additional burden of conveying information and fictions with clarity and beauty.

What book would you send to the leader of a government that imprisons writers?
Assuming s/he would listen, Joseph Brodsky’s essay collection, Less Than One.

Where is the line between observation and surveillance?
I should ask my sources. They’re generous—and perhaps naive—to let me into their lives. I call and text and e-mail them again and again.

Ken Chen is the executive director of the Asian American Writers’ Workshop, and a founder of Arts & Letters Daily. The 2009 recipient of the Yale Series of Younger Poets Award for his debut poetry collection, Juvenilia, he is also a recipient of fellowships from the National Endowment for the Arts, New York Foundation for the Arts, and the Bread Loaf Writers conference. A graduate of Yale Law School, Ken successfully represented the asylum claim of a Guinean teenager who had been detained by the Department of Homeland Security. For the PEN Ten, Ken will be interviewing the poets and novelists of the Asian-American counterculture.

"The CCP sees its continued reign as dependent not only on its long-standing practice of severely restricting speech inside China but also on dictating global narratives about China." Read PEN America CEO @SuzanneNossel's latest piece in @ForeignPolicy: https://bit.ly/3Bl6IX0.

Tonight! Tickets still available for my conversation with @PamelaPaulNYT via @PENamerica. She said that since she’s interviewed me before, it’s only fair that I should be ruthless in my questioning in return… https://pen.org/event/pen-out-loud-pamela-paul-with-lauren-oyler/