The PEN Ten with Amitava Kumar 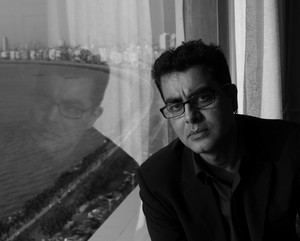 The PEN Ten is PEN America’s biweekly interview series curated by Lauren Cerand. This week Lauren talks with award-winning author and journalist Amitava Kumar. Kumar is the author of several works of nonfiction and a novel. His most recent book is A Matter of Rats: A Short Biography of Patna. Lunch With a Bigot, a collection of his literary essays and reportage, will be published in May by Duke University Press. Kumar is a professor of English at Vassar College.

I must have been sixteen or seventeen. In a vague way, I began to think of myself as a writer. Except, and this is the odd thing, the Bhopal gas-leak took place when I was an undergrad and it didn’t occur to me that I could take a train down there and write about it. Instead, I wrote poems about the girl who used to take the same bus to the university. Her jawline stirred me more than anything else in the world.

I’m sure I already have. A phrase or two, maybe a line. Certainly ways of looking. I’m thinking here of John Berger but I’m sure there are others too.

I was once on a transatlantic flight, going to judge a literary prize and therefore being flown business class. The unexpected luxury, not to mention Jimmy Cliff singing “You Can Get It If You Really Want,” released something in me. I wrote a short-story which I later published with Cliff’s title. But one can’t be flying every day, and certainly not in luxury, so I write in my study with the books and songs I like within easy reach.

I have but I can’t talk about it. I could get deported.

Failure. I’m obsessed with failure because I think of it as our common fate and material. Every time he puts a sheet in the typewriter, Naipaul’s Mr. Biswas types out the following: “At the age of thirty-three, when he was already the father of four children….” The half-finished sentence lights up a whole dark universe of desire and futility. I want to write about failure the way others write about sex or death.

My mother died recently. In my last book, which came out in India a few months before she died, I had written about anticipating my parents’ death. Was it courage on my part? Or was it only fear? An incantation against the inevitable.

My mother had more courage. A few years ago, on a visit to my hometown in India, I was asking her about her early days—what happened when she married my father, someone she hadn’t met till the day of their wedding? I asked her what was it that my father had loved about her. We had never talked like this before. She said that there had been love, but didn’t say anything else. When I got back to the States, I saw a letter tucked into my notebook. My mother must have put it there. It had been written by my father around the time of my birth. The letter was full of love and physical ache. I found it difficult to even read that letter. I tried to honor my mother’s daring and smuggled a part of it into a novel I was then writing.

Our responsibility is only to be honest, even if it means being base or wrong. I fear it is fashionable for many writers to think that they have to be right. I want to be wrong but true. Our task is to be human.

I confess I’m always uncertain when I’m asked to sign petitions. But I like very much reading writers who—more as writers than as citizens—address an issue of broader concern. If writers have a collective purpose, it is only to be singular in approaching any social issue.

The banality of evil is not that there is no interest in culture. No, the leader can read and be moved by a fine book and still imprison writers. I wouldn’t want to instruct but I could share. I’d share whatever I was reading at that time. I’m at last reading right now Sonali Deraniyagala’s Wave. Her sadness has seeped into every part of my waking consciousness.

I’m always haunted by a scene: Chinese kids during the Cultural Revolution denouncing their parents and teachers. “My parents like to read poetry.” “My mother tore up the picture of Chairman Mao.” “Our teacher is a class enemy.” An oppressive system wants you to draw the line between you and the enemy. Who is the enemy? Where is the line between seeing and judging? Forget children. When is it not a violation to observe? Writers have always known this, but they own up to it. The state disowns it, unless it is utterly brazen and corrupt, and that is its greater violence.