The PEN Ten with Amanda Vaill 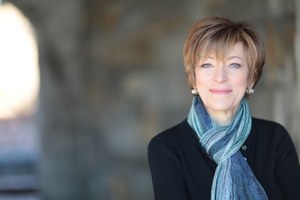 The PEN Ten is PEN America’s biweekly interview series curated by Lauren Cerand. This week Lauren talks with biographer, journalist, and screenwriter Amanda Vaill, who has just celebrated the release of her new book, Hotel Florida: Truth, Love and Death in the Spanish Civil War. Amanda wrote the screenplay for the PBS/American Masters documentary, Jerome Robbins: Something to Dance About, which won both an Emmy and a Peabody Award, and was a co-author of Seaman Schepps: A Century of New York Jewelry Design, an illustrated study of the work of her designer grandfather. She is also the author of Somewhere: The Life of Jerome Robbins, for which she received a Guggenheim Fellowship, and the bestselling Everybody Was So Young: Gerald and Sara Murphy—A Lost Generation Love Story, which was a finalist for the National Book Critics’ Circle Award in biography.

When did being a writer begin to inform your sense of identity?
It hasn’t, really; I’m still surprised to answer “I’m a writer” when people ask me what I do. I wrote as a child—pages of what we would probably call fan-fiction today, extensions or imitations of things I’d read whose worlds I still wanted to inhabit when I finished them. And in high-school I was obsessed with Virginia Woolf’s A Writer’s Diary, which delineated a universe I longed to be a part of. But I never thought I belonged in it, until one day I was there.

Where is your favorite place to write?
Wherever my computer is, as long as I have all the sources I need close at hand (or on my hard drive, or the Internet). When I’m writing the world tends to fall away; I literally forget what time it is.

Have you ever been arrested? Care to discuss?
No. The closest I’ve come is getting a traffic ticket; although I did have an altercation with a mounted policeman during a protest about the launching of the Iraq war.

Obsessions are influences—what are yours?
Art, theater, music, film, and of course books, in no particular order. If someone gave me a million dollars, that’s where it would all go.

What’s the most daring thing you’ve ever put into words?
My first pitch letter as a writer.

What is the responsibility of the writer?
Hemingway, master of the sound bite, had it down: “Write one true sentence. Write the truest sentence that you know.” I would add: and then keep writing.

While the notion of the public intellectual has fallen out of fashion, do you believe writers have a collective purpose?
No matter whether anyone is listening to them or not (surely one measurement of public intellectualism) writers have not only a collective purpose but a responsibility—to record how we live, what we say and think and do, and to try to make sense of that.

What book would you send to the leader of a government that imprisons writers?
I’m not sure that reading any book, by itself, would change such a leader’s mind; but I might send a copy of The Diary of Anne Frank along with a note: “Over 30 million copies sold.” That might make the leader stop and think.

Where is the line between observation and surveillance?
Secrecy and power.