The PEN Ten: An Interview with Keiichiro Hirano, Translated by Eli K.P. William

The PEN Ten is PEN America’s weekly interview series. This week, Viviane Eng speaks with Keiichiro Hirano, author of At the End of the Matinee (Amazon Crossing, 2021), translated from Japanese to English by Eli K.P. William.

1. Where was your favorite place to read as a child?
My bedroom.

2. What do you read (or not read) when you’re writing?
Books that I need to read for research, but also many other unrelated books. I read poetry collections purely for enjoyment. Rilke’s Duino Elegies were a major source of inspiration for At the End of the Matinee.

3. In the prologue to At the End of the Matinee, you write that “while fiction makes it possible to refrain from revealing some secrets, it is the only way to reveal others.” How does your writing navigate truth? Can you speak more on the relationship between truth and fiction?
In the context of fiction, I prefer the word “reality” over “truth.” Fiction is necessary because reality demands it. In other words, reality calls upon me to share what is currently happening in a more purified form.

Personal experiences that are otherwise impossible to relate can also be conveyed to others within the protective shell of fiction. I think our discontent with reality, too, sometimes drives us to seek satisfaction in fiction. Exhaustion from existence in the real world facilitates the release that fiction brings.

“In the context of fiction, I prefer the word ‘reality’ over ‘truth.’ Fiction is necessary because reality demands it. In other words, reality calls upon me to share what is currently happening in a more purified form.”

4. What’s something about your writing habits that has changed over time?
When I first became an author, I had a whole list of requirements to satisfy in order to write. For example, I could only write at night, and I couldn’t read anyone else’s work lest their writing style influence mine. But gradually I’ve learned to focus and write whatever the circumstances and whatever else I’m doing at the time. This is partly because I’ve become accustomed to the work, but I’ve also changed due to the demands of housework and childrearing.

5. What is a moment of frustration that you’ve encountered in the writing process, and how did you overcome it?
Writing fiction brings me no stress whatsoever. I’ve never felt like I was stuck, either. However, my schedule is often filled with other tasks, such as participating in panel discussions, being interviewed by newspapers and magazines, giving talks, and writing articles about politics and social issues. When I’m unable to secure enough time for writing fiction, I feel extremely frustrated.

6. What is your relationship to place and story? Are there specific places you keep going back to in your writing?
The settings of my work change constantly in accordance with the theme, from southern France of the Middle Ages, to 19th-century Paris, to deep in the mountains of Nara Prefecture in the Meiji era, to Tokyo and suburban Houston in the future—not to mention Mars and virtual reality. I think carefully about which places would best suit the story and try to research them on the ground prior to writing. My settings are often places I have actually lived or visited. Naturally, my current home, Tokyo, is a setting I use often.

7. Why do you think people need stories?
To stay sane in this crazy world.

8. While many authors of fiction draw on reality to develop their characters and plotlines, they don’t always mention this anywhere in the book. Why did you feel that you had to make a point of letting the reader know that the story of Makino and Yoko were based on a “true” story of people you know?
I was interested in the function of the prologue in some of the best stories written from the 18th century to the middle of the 20th. Robinson Crusoe, The Brothers Karamazov, The Magic Mountain, and Nausea all have a fascinating prologue that explains why the protagonist is a person that deserves particular attention. This device allows the writer to ease readers into the story slowly, without the need to rush into the exciting part to capture the interest of easily bored readers.

In a work of sheer fiction, the reader will have their guard up for descriptions like “beautiful” and “talented.” It will seem contrived if the author tries to portray the protagonist in a positive way like this. But if the protagonist is based on a real person, the reader will accept such descriptions as objective. This is true even if it is uncertain whether the person does in fact exist. I was specifically inspired by Marguerite Yourcenar’s Coup de Grâce when writing At the End of the Matinee.

“When a novel has compelling prose, brims with soul-shaking turns of phrase, features characters more intriguing than real people, and depicts a world that provides a greater sense of spiritual exaltation than reality, I feel sad to have to finish reading it . . . I think this is because works of art are a kind of intense, visceral experience.”

At the time that such novels from previous eras were written, the fictionality of the work was not made apparent through metafiction as it would be later, but fiction was self-evidently fictional. I feel that this is actually close to our current situation, where authors’ daily lives appear before us on social media. But once I get started on this topic, I might not stop, so I’ll save it for another time.

9. You have said that you have always “thought of writing novels that, rather than making people’s hands unable to stop turning to the next page, are so immersive that a reader would want to bask in it forever, in a state of both wanting and not wanting to turn to the next page.” For you, what are the specific qualities that make these two types of novels different from each other? Are there any books you’ve read recently that have made you want to stay entrenched in the worlds within their pages?
When a novel has compelling prose, brims with soul-shaking turns of phrase, features characters more intriguing than real people, and depicts a world that provides a greater sense of spiritual exaltation than reality, I feel sad to have to finish reading it. Works such as Crime and Punishment and Buddenbrooks are exceedingly lengthy, but I felt genuine dismay at having to close the covers when I finished them for the first time. I think this is because works of art are a kind of intense, visceral experience. To give a more recent example, Han Kang’s stories brought me the kind of enjoyment I just described.

On the other hand, while we all love books that absorb us and make us want to keep turning the pages, books that make this their main purpose using technical tricks have a certain emptiness.

“I think about the overall flow of a story in terms of music. This is because music is a temporal art. Analogy to musical ideas like movement, transition, harmony, and melody allows me to visualize the balance and changes in the plot.”

10. One of the elements that make the chemistry between Yoko and Makino so memorable is the dialogue they share. I was especially struck by their early conversation on beauty in this world, when Makino says that beauty must be “worn out from being saddled with such cumbersome tasks all the time,” such as making “horror acceptable” to look at in violent movies. Yoko offers a different perspective, that “beauty has equal power to enable us to turn our eyes momentarily from the horrors of this world” (78-79). When writing about something as intense and fickle as romantic love, how do you balance depicting the more beautiful moments with those that are heavier? How do you reinforce this balance using dialogue?
Music and paintings teach me a lot in this regard. I think about the overall flow of a story in terms of music. This is because music is a temporal art. Analogy to musical ideas like movement, transition, harmony, and melody allows me to visualize the balance and changes in the plot.

With all the troubles in the world right now, we need beautiful love stories like At the End of the Matinee.

Keiichiro Hirano is an award-winning and bestselling novelist whose debut novel, The Eclipse, won the prestigious Akutagawa Prize in 1998, when he was a 23-year-old university student. A cultural envoy to Paris appointed by Japan’s Agency for Cultural Affairs, Hirano has lectured throughout Europe. Widely read in France, China, Korea, Taiwan, Italy, and Egypt, Hirano’s novels include the Junichi Watanabe Literary Prize-winning novel At the End of the Matinee—a runaway bestseller in Japan—and the critically acclaimed and Yomiuri Prize for Literature-winning A Man. His short fiction has appeared in The Columbia Anthology of Modern Japanese Literature. Twitter: @hiranok_en 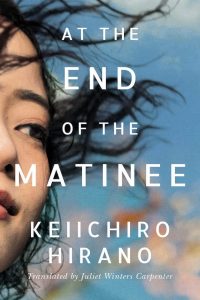 The PEN Ten: An Interview with Brian Broome

The PEN Ten: An Interview with Donika Kelly

The PEN Ten: An Interview with Elissa Washuta