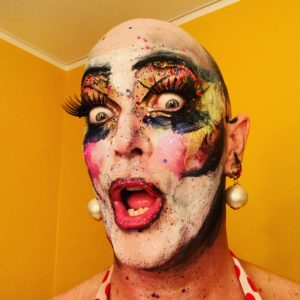 1. In a recent New York Times feature about your new opera, The Hang, you are quoted saying, “I wanted to find out, can we be as theatrical as possible, can we bring the queer culture into it, and find a way to express a truth rather than a lie?” To that end, how does your writing navigate truth? How do you see the relationship between truth and fiction?
There’s a moment in The Hang when Socrates steps forward to directly address what time we’re in (his, ours, beyond). In it he sings: “Perhaps we are forward while going back / Foolery reigns / Facts are in question and questions are facts / But I progress / Or acknowledge the digression of our progression / Two steps forward, one step or trip / And who knows whether we are back or forward in disguise.” That’s how I’m feeling about truth and fiction in this era of misinformation (a political tool the Ancient Greeks were all too familiar with). Truth and fiction have been manipulated, oppressed, and mashed up so many times I couldn’t possibly say what is what. Though, it’s not my job as a theater artist (nor is it the philosophers’) to say what truth or fiction are. I’m more concerned with dramatic action. What we craft for the audience to experience is the reaching for truth or fiction, not the things themselves.

In light of all that, I’m guessing Plato’s accounts of the final hours of the life of Socrates are much more accurate than mine but, in making theater—an ephemeral art form—what The Hang expresses, which Plato’s written documentation is less successful at, is the ephemeral spirit of Socrates’ practice.

2. What was one of the most surprising things you learned in writing The Hang?
Matt Ray’s score. I had a hunch he’d make something wonderful, or I wouldn’t have asked him to collaborate, but it’s above and beyond anything I could have imagined. The interesting thing about it, to me, from a craft perspective, is he didn’t use traditional musical theater hypnosis techniques. There are very few repeating themes, that layer as the work goes on. He trusted that the heart he put into the compositions would be enough to connect the work as a whole. And it does, while freeing the listener from the usual music theater experience, which has become so dependent on communication through repetition.

“Compartmentalizing our fullness in order to meet the demands of capitalism may be the root of most of our problems.”

3. In thinking about the scope and magnitude of your masterpiece, “A 24-Decade History of Popular Music,” I found myself in places that felt both foreign and frighteningly familiar. It made me wonder about your relationship to place and story. Are there specific places you keep going back to in your writing?
The queen in the corner. My friend Dirty Martini, who is a gorgeous and voluptuous burlesque performer (really one of the greats) was an extra in a film, dancing on a box in a corner to imply that the leads were at a wild party. The film was cast in the usual Commedia way where the heroes are fit and the heroines are lean. I kept thinking, why can’t the story be about that queen in the corner dancing on the box. One of my favorite things to do is watch Hollywood movies with the sound off and just focus on the extras. There are so many fascinating people. So, when I read Titus Andronicus the character I was most interested in was the little clown with five lines. Who is that man that has to navigate this world full of behemoths all insisting they should be the lead of our story? Likewise, in The Hang, you can’t argue that Socrates hasn’t received his fair share of consideration but the aspect of the story I’m most interested in is the one that rarely gets mentioned. His queerness. Sure historians and academics write and discuss it to some degree but it’s rarely at the center. We put the spirit of his queerness, which is so apparent in the way Plato has him speak, at the center of this work.

4. You have been described as a “maximalist.” Can you speak to how this and other intersecting identities shape your writing? Do you believe there is such a thing as “the writer’s identity?”
Well, I think Jesse Greene from the Times described me as a maximalist. It’s not the word that stands out when I think about my work but I’ve embraced it (as once the Times says something about you, everyone starts describing you that way). Plus, it’s not totally wrong. I’m interested in the world. One could argue God is a maximalist as well. The great thing about it is, it includes minimalism. There’s plenty of minimalist moments and considerations in all of my work. In terms of the writers’ identity, as long as you treat it like gender and sexuality and get to change with each new project and period of your life, I’m all for committing.

5. As you know, PEN America sits at the intersection of free expression and literary excellence. What do you consider to be the biggest threat to free expression today?
Capitalism. With Frederick Taylor’s Taylorism a close second. I know it seems like a free market should give us freedom to create but in fact it takes away our ability to survive without conformity and it gives our power to those who are more ruthless, quick, and narcissistic. I prefer the guild system of knowing how to make the entire table, taking the time to do it, keeping the craft and the selling of it relatively grassroots, and caring about the expression from beginning to end. Compartmentalizing our fullness in order to meet the demands of capitalism may be the root of most of our problems. 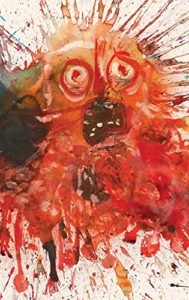 The cover of Gary: A Sequel to Titus Andronicus

6. What is the role of a writer in an era of social unrest? Polarization?
The Hang, Gary, A 24-Decade History of Popular Music, and practically all my work are little fever dream prayers asking the audience to wonder together rather than be in suspicion. They also tend to model the behavior we’re hoping the rest of the country will adopt (there’s a few exceptions, like my play Hir, which works more like Medea, in that it shows how we don’t want to be). Rather than merely commenting on the way the world is, can we make the world we want. I want an America that truly considers together, so we make shows where people consider and hope the audience will leave doing the same.

7. What was the first book or piece of writing that had a profound impact on you?
Italo Calvino’s The Baron in the Trees. I think I read it when I was 13 and it was the first book I’d personally purchased with my own money and which wasn’t assigned to me in some way. I think before Calvino I’d assumed writing was usually literal, with bits of fancy. Afterwards, I realized most writing is metaphorical with bits of the literal.

8. What is one book or piece of writing you love that readers might not know, or one that you wish every person should know?
#24 in “A Song of Myself.” That’s why it’s in 24-Decade and we made a short film of me performing it for The All Arts Channel. It reclaims the Cosmos as queer.

“What we craft for the audience to experience is the reaching for truth or fiction, not the things themselves.”

9. Often, when we ask this question, we can’t look to an award-winning body of work that sits in dialogue with Socrates, Shakespeare, and Ted Nugent. Still, I would love to know which writer, living or dead, would you most like to meet? What would you like to discuss? (I might be fishing for a glimpse of your next theatrical exploration).
Ask me another day and I’ll give you another answer. Right now, Herman Melville. I just finished writing a lyric about him for our work in progress called, The Bark of Millions. It’s a parade trance extravaganza we hope will add to the living library of the deviant theme. Another way of explaining it is, it’s over fifty original songs Matt Ray and I are writing about queer people throughout world history. I recently reread Moby Dick and was struck by how queer and funny it is. I think I’d like to talk and laugh with him about that. And to get the inside dirt on his relationship with Hawthorne (though their heartbreaking love letters are about as inside as you can get).

10. Why do you think people need stories?
Do we? Maybe we need communion. It seems stories are a way to get to communion. So, there ya go.

Taylor Mac is the first American to receive the International Ibsen Award, is a MacArthur Fellow, a Pulitzer Prize Finalist, a Tony nominee for Best Play, and the recipient of the Kennedy Prize (with Matt Ray), the Doris Duke Performing Artist Award, a Guggenheim, the Herb Alpert Award, a Drama League Award, the Helen Merrill Playwriting Award, the Booth, two Helpmann Awards, a NY Drama Critics Circle Award, two Obie’s, two Bessies, and an Ethyl Eichelberger. An alumnus of New Dramatists, judy is currently the resident playwright at HERE, NYC and the author of The Hang (with composer Matt Ray); Gary: A Sequel to Titus Andronicus; A 24-Decade History of Popular Music; Prosperous Fools; The Fre; Hir; The Walk Across America for Mother Earth; The Lily’s Revenge; The Young Ladies Of; Red Tide Blooming; The Be(A)st of Taylor Mac; and the revues Comparison is Violence; Holiday Sauce; and The Last Two People on Earth: an Apocalyptic Vaudeville (created with Mandy Patinkin and Susan Stroman).

The PEN Ten: An Interview with Moncho Alvarado

The PEN Ten: An Interview with Elise Levine

The PEN Ten: An Interview with Elina Kulikova

The PEN Ten: An Interview with Darrel Alejandro Holnes