The PEN Ten: An Interview with Rešoketšwe Manenzhe 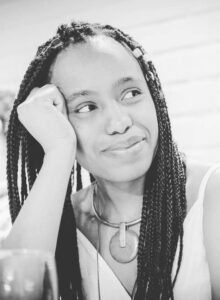 1. Both the title of the novel and its opening epigraph, “Scatterlings and fugitives, hooded eyes and weary brows, seek refuge in the night,” are from a 1982 song by the South African band Juluka, “Scatterlings of Africa.” What is the relevance of that song to you and the novel?
I watched a talk once, in which Johnny Clegg (one of the members of the band) spoke about the origins/meaning of the song, about how human evolution began in Africa, and I applied that to the character in the book since they all start in Africa, but survival forces them to leave.

2. The novel begins in 1927 when the Immorality Act passed in South Africa, prohibiting intercourse between “Europeans” (white people) and “natives” (Black people). What drew you to begin the novel at that point in South Africa’s history?
This is an especially neglected aspect and period of South African history in literature, as the majority of books, both fiction and non-fiction, tend to focus on men’s stories. Additionally, the vast majority of literature tends to focus on the incumbent years of apartheid, never sufficiently examining the factors that led to the implementation of the regime.

“Alisa’s story had to be told, and it had to be told in her own words. Then, whoever was listening (or reading in this case), could decide for themselves what to do with the information.”

3. While to an extent most of the novel’s main characters are displaced from the land of their births, be it country or locale, all of the black women in the novel, Alisa, Dido, Mmakoma, and Josephina are all permanently uprooted. Why is that the case?
Because, given the context of this particular world at this particular time, those would be the people with the least amount of control over their immediate plights. They would have been ignored, or their compliance would be assumed, and when they exercised agency, they would meet the strongest resistance.

4. When I first read the name of Abram and Alisa’s young daughter, ‘Dido,’ my mind immediately leapt to Virgil and Dante’s depictions of the Cartheginian Queen Dido. I then read every section about Dido with mounting trepidation. How did you come to choose the name Dido and what relevance, if any, does the myth have to the novel?
A lot of the names were chosen for simplicity, because I was struggling with names, so I gave everyone a name I knew I would change later on. In fact, Dido started out with a completely different name (that started with the letter A, like both her parents. This felt like the sort of thing Abram and Alisa would do). But I couldn’t think of a suitable name for Emilia that also started with the letter A, so I changed Dido’s to her current one. Given Alisa’s fascination with stories, this fit the story well as I researched the name more and found out about Queen Dido. Thus, Dido’s full name is Alisa Dido.

5. Early in the novel, Alisa does a horrific thing that forever alters the lives of those that love her. The novel then moves backwards twenty years in time taking on the form of Alisa’s diary entries, which, without justifying her decision, creates a space for comprehending her decision. The act of diaristic time travel humanizes Alisa. In shaping the novel, why was it necessary for you to have the reader hear from Alisa directly?
In the initial draft, Alisa’s chapters weren’t there. In the second, they were very brief and limited. In both these versions, the story then had to do a lot of theorizing and suggesting and flash-backing, and none of it felt complete, or as though it told the story of a full human who had lived a full life. Alisa’s story had to be told, and it had to be told in her own words. Then, whoever was listening (or reading in this case), could decide for themselves what to do with the information. If everything was narrated in the same way as the rest of the book, it would have been like a justification of sorts, as if to say, “Alisa was absolutely right. What she did was okay.” But in having her take charge of that chapter, the story could also be freed from my opinion as a writer.

“I think art, in general, is important for society, to nurture the softer aspects of what makes us human.“

6. What is your relationship to place and story? Are there specific places you keep going back to in your writing? 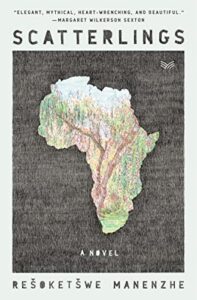 Contrary to my novel, I primarily write about village people. I came from a village, and villager lives are the easiest for me to imagine. I find the nuances and intricacies incredibly compelling. Cape Town also features a lot in my stories; other than my home, I have lived here the longest. In both cases, I can easily imagine how a scenario would play out, how the dialogue would evolve, what taboos would be alluded to, if social hierarchy would influence anything, etc.

7. Why do you think people need stories?
I was lucky enough to be in the room when poet Diana Ferrus told the story of how she wrote a poem that essentially amended French legislature and repatriated the remains of Sara Bartman to South Africa. Without that one poem, it’s very likely that Sara Bartman, more than a century later, would still be displayed in some French museum, to be gawked at and derided in the same way she was when alive. But it only took one poem, and she was returned home. So, I think art, in general, is important for society, to nurture the softer aspects of what makes us human.

8. What was the first book or piece of writing that had a profound impact on you?
The short story “The Rain Came” by Grace Ogot. It was the first time I saw village people depicted in a way that wasn’t condescending or mocking. They just went about their lives, and something extraordinary just so happened to occur.

“It can be daunting, since it can be easy to look around and think maybe you aren’t as talented or hard-working as everyone else, which wouldn’t be true. Be patient and work at a pace that suits you best.”

9. What is the last book you read? What are you reading next?
The last book I read was “Red Tenda of Bologna” by John Berger. I plan on reading “Glory” by NoViolet Bulawayo next.

10. What advice do you have for young writers?
Have a circle of friends who also write, like a writer’s group where you read each other’s work and provide feedback. This should consist, preferably, of writers in the same level of their career as you. For instance, if you’re just starting out and everyone in your writing group has already had a few pieces published, you’ll get left behind since they’ll already be looking for something you might not even be able to fully comprehend. Even their industry vocabulary might seem a bit advanced. It can be daunting, since it can be easy to look around and think maybe you aren’t as talented or hard-working as everyone else, which wouldn’t be true. Be patient and work at a pace that suits you best.

Rešoketšwe Manenzhe is a South African villager and storyteller. Her short stories and poems have appeared in the Kalahari Review, Fireside Fiction, Lolwe, FIYAH, and the 2017 Sol Plaatjie European Union Anthology, among other outlets. She has won the 2019 Writivism Short Story Prize, the 2020 Dinaane Debut Fiction Award, the 2021 Akuko Short Story Competition, the 2021 HSS Award for Best Fiction, the 2021 UJ Prize for South African Fiction in English, the First-Time Author award at the 2021 South African Literary Awards, and she was the first runner-up for the 2019 Collins Elesiro Prize for Fiction. She was shortlisted for the 2021 Sunday Times CNA Literary Awards. She lives in Cape Town.

The PEN Ten: An Interview with Kristín Ómarsdóttir

The PEN Ten: An Interview with Cynthia Dewi Oka

The PEN Ten: An Interview with John Weir