The PEN Ten: An Interview with K-Ming Chang

1. The stories in Gods of Want center memory, myth, and the ways in which our ancestors live on in the present and in our bodies. What made you want to write about this? 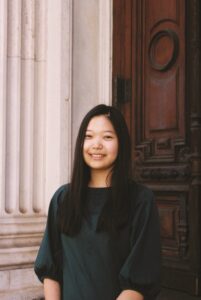 I’m interested in inherited stories and the collective memories of communities and families, as well as how those memories are metabolized in the body, and how they affect a character’s desires and agency. Myth-making is so playful and permission-giving because it’s a collective form of storytelling that doesn’t belong to just one person and refuses to be property. The instability of memory and myth allow for infinite possibilities and beginnings, and I find that it’s my most accessible entry point into any story or narrative. For many of the characters in Gods of Want, memory and myth are consumed in literal and figurative ways, and these stories contain seeds of transformative potential. I think there’s something so queer about the transformative nature of myth, and I often think of stories in terms of transformation rather than plot or development.

2. Many of the most memorable scenes in the collection are steeped in myth, ghost stories, and surrealism. How does the strange and the absurd enable us to think more deeply about reality?
I recently read an essay by Yan Lianke in Lit Hub, where Yan writes about mythorealism as a way to surpass reality. He writes: “It can be said that mythorealism is a creative process that rejects the superficial logical relations that exist in real life to explore a kind of invisible and ‘nonexistent’ truth.” This essay resonated very deeply with me. I love the idea of “surpassing reality” and making a metaphor literal, pushing the language to its most absurd or exaggerated. Like him, I’m less interested in metaphors and surrealism as “bridges” to truth—rather, I’m interested in the language serving itself, and reveling in the language and sound as their own form of meaning and beauty. It was also very natural for me to write about the strange and absurd, which don’t feel strange at all as I’m writing them. I’ve been surrounded by magic and fate and ghosts my entire life, in family and collective legends alike, and their presence can’t be brushed aside as I write.

“The instability of memory and myth allow for infinite possibilities and beginnings, and I find that it’s my most accessible entry point into any story or narrative.”

3. In line with the previous question, were there specific myths you leaned on for inspiration during your writing process?
There were many creatures from Chinese mythology that I loved researching and reimagining while writing these stories. One of my favorites is the creature that’s featured on the cover, which is the nine-headed bird. It’s actually a 10-headed bird, but its 10th head is severed—its neck perpetually dripping blood. One of the most interesting things I read about it was that it’s nicknamed the Ghost Car, since its voice sounds like the revving of an engine, and I loved the mundanity of that sound combined with the grotesque beauty of the creature. I’m always interested in how the magical/mythical and the mundane are intertwined, and how a single sentence or description can contain contrast or tension.

4. In “The Chorus of Dead Cousins,” one character remarks, “You can’t take a picture of an earthquake… You can only take a picture of the aftermath. The buckled knees of buildings, the streets razored with cracks.” What’s something that you’ve experienced difficulty describing through the written word? When you run into this obstacle, what are some ways you try to overcome it?
Writing sex scenes and romance is incredibly difficult for me! I think it’s because there’s such an excess of inherited language around sex and romance, and it can be difficult to really zoom in on the dynamics and desires of the characters on the scene and locate the language internally. But I also find so much joy, pleasure, complexity, and rapture in writing about intimacy and sensuality, and I try to overcome the daunting nature of writing these scenes and relationships by not being afraid to follow the language. The language leads me before all else, and as long as I follow the sounds of the words and the sentences, I usually find myself somewhere unexpected, surprising, or delightful.

5. Your previous book, Bestiary, also focuses on family legends and the lives of Taiwanese American women. Did your approach to writing Gods of Want differ from that of your novel? What did you learn from your first writing and publication process that informed this one?
In many ways, I didn’t approach them too differently: I tend to follow language and imagery, allowing the sonic quality of the sentence or the line to guide me. I also wrote many parts of both books in small, self-contained sections of flash fiction. I’m really interested in unraveling seemingly small moments and planting images and motifs that can recur throughout the longer piece. I think that writing and publishing my first book taught me that I was capable of completing a longer project while still exploring and experimenting with form and style. The structure and style of Bestiary liberated me to not pay too much attention to genre labels.

6. What advice do you have for anyone releasing a book in the current climate? 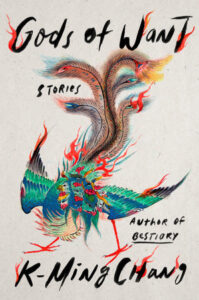 I definitely feel like I’m the one who needs advice! One thing I think about, and am grateful for, is that books find their communities and the people who need them and are searching for them. I always try to remind myself of that.

7. You were named a 5 Under 35 Honoree in 2020—a distinction given to five young fiction writers annually whose works promise to leave a lasting impression on the literary landscape. This suggests that you will be writing for a long time! With this in mind, what kind of stories do you hope are better amplified in the literary landscape of the future?
Reading translated fiction has always been transformative and life-giving for me, and it’s the majority of what I read. It’s what inspires me constantly and expands the possibilities of what a story can be. I’m excited for a literary landscape filled with even more BIPOC translators and linguistic playfulness.

8. Which writer, living or dead, would you most want to meet? What would you choose to discuss with them?
This is such a difficult question! Rather than a first meeting, my instinctual wish was to visit all the teachers I’ve had the honor of meeting and learning from over the years, like Rattawut Lapcharoensap, Rachel Eliza Griffiths, and Truong Tran. I’m so grateful to them for their encouragement, insight, writing prompts, edits, and faith in my writing, even when I wavered. Whenever I’m working on something new or feel particularly discouraged, I always think about the teachers I’ve had, and the particular times in my writing life when they’ve challenged and inspired me.

“Reading translated fiction has always been transformative and life-giving for me, and it’s the majority of what I read. It’s what inspires me constantly and expands the possibilities of what a story can be. I’m excited for a literary landscape filled with even more BIPOC translators and linguistic playfulness.”

9. What’s the last book you read? What are you reading now?
The last book I read was an omnibus of The Sandman comics, and I’m currently reading the next omnibus. I’m also reading Permafrost by Eva Baltasar, translated by Julia Sanches, which is completely captivating.

10. What’s a fact or piece of art that inspires you?
I recently found out that in times of hardship, when their populations are dwindling, California Condors are capable of laying fertilized eggs even without the presence of a mate. That kind of bodily innovation and resilience is deeply inspiring and miraculous to me. I also found out that elephant seals come ashore to shed their skins and regrow new skin, and they pile up on the beach and bathe in the sun and the sand, spending all day just shedding and regrowing. That’s the kind of energy I want to embody!

K-Ming Chang is a Kundiman fellow, a Lambda Literary Award finalist, and a National Book Foundation 5 Under 35 honoree. She is the author of the novel Bestiary, which was longlisted for the Center for Fiction First Novel Prize, the PEN/Faulkner Award, and the VCU Cabell First Novelist Award.