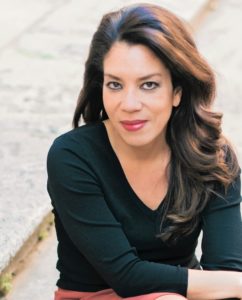 1. What is one book or piece of writing you love that readers might not know?
Small Island by Andrea Levy. After the book was published in 2004, Levy, a British author of Jamaican descent, won several prizes for the novel, which looks at the lives of West Indian immigrants and others in England in the aftermath of World War II. It was also adapted into a BBC screen production [the series aired in the U.S. on PBS in 2010]. Still, many readers today might not be familiar with the book. Small Island is eye-opening, poignant, and actually quite funny in parts.

2. What is the most daring thing you’ve put into words? Have you ever written something you wish you could take back?
I’m just now releasing my debut novel, and I’ve only published a handful of shorter stories. I wouldn’t say that I wish I could take any of it back. I think the most daring thing that I have done is to choose not to put certain things into words. When writing scenes of great drama or violence, I sometimes skip what others might consider to be obligatory details. I have written passages that were quite spare and even cryptic. I believe that a scene can carry sufficient information and emotional weight for the reader, even without all the particulars. Omission has presence, too.

“I was one of those kids who loved books and always wanted to write stories. But I grew up to write all sorts of other things, instead, as a news and communications professional. It was only several years ago that I gave myself permission to spend more time on fiction.”

3. In an article for Fiction Southeast, you discuss the value of stories and how they have helped you shape and process events in your life: “I grew up surrounded by books and I love to see stories given new life on the stage or in films. But to say why I write is like trying to explain why I look or speak as I do.” Did you always know that you wanted to write fiction or is that a discovery that you made about yourself later in life?
The pull was always there. I was one of those kids who loved books and always wanted to write stories. But I grew up to write all sorts of other things, instead, as a news and communications professional. It was only several years ago that I gave myself permission to spend more time on fiction.

4. Writing is often a private and intimate process. Now that Black Cake has been published, it also belongs to readers. How do you prepare for that?
I keep reminding myself that the book is already written—it’s out of my hands now. However things go, I need to find and keep my center by continuing to make mental room for the thought processes that will lead me to write new stories.

5. What is your relationship to place and story? Are there specific places you keep going back to in your writing?
Rather than specific cities or countries, I find myself gravitating to sensory experiences of things like seawater, dirt, or the sight or sound of smaller creatures. I am fascinated by the way in which a character inhabits the physical world around them, what it feels like to be eating, or playing in a garden, or walking down a cement sidewalk. It could be an island in the Caribbean or a chilly, northern city, both of which can be found in Black Cake. 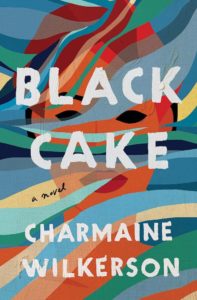 6. What’s a piece of art (literary or not) that moves you and mobilizes your work?
I like to look at an old silk screen used by my father, who was a textile artist. The screen, held taut by a wooden frame, is not the final work but something like the bones of what will be fleshed out on a piece of fabric. The design etched into the screen and the splash of cobalt blue dye staining the frame remind me that art and craft rarely happen in a flash. Artistic endeavor—including fiction writing—requires work, regular practice, helpful tools and, often, a good bit of cleanup. Sometimes, I gaze at that frame and think, just keep doing the work.

7. What advice would you give to a writer who is trying to publish their book—not just in general, but especially in this current climate?
It’s important to give yourself permission to write what comes to you; first, to avoid censoring your own creative efforts by worrying about what people will think or how to publish. At the same time, I would advise making use of digital technologies to learn about potential publishing outlets and to get a read on what agents and editors are looking for. Many writers are building connections virtually and learning about workshops and competitions that open doors to small-press publications, for example.

8. There are a lot of phases to publishing a book that not everybody knows about. Which would you say was the most challenging for you?
I had no idea how easily I would be distracted by meeting short-term writing and communication requirements related to the release of my debut novel. I am crawling my way back to my former routine of Internet-free, anti-social morning hours. This is how I slip into the more open-ended thinking, drafting and research processes that I need to produce new fiction.

“When writing scenes of great drama or violence, I sometimes skip what others might consider to be obligatory details. . . . Omission has presence, too.”

9. Black Cake opens with two estranged siblings, Byron and Benny, who make some strange discoveries after their mother’s recent death. One is a long voice recording that delves into a forgotten history filled with secrets about their lineage that had never been relayed to them while their mother was alive. The voice memo drives the plot of the novel, which oscillates between Byron and Benny’s experience in the present and what is exposed through their mother’s revelations. In your view (and perhaps in Byron and Benny’s too!), what are some things that oral histories and novels can convey that most textbooks can’t?
Oral histories and novels have the potential to add emotional weight to information about people and the past. They help us to explore seeming contradictions or conflicts in people and cultures without imposing the need to tie things up neatly. Even when a story is printed or recorded, it is part of a vital, evolving consciousness.

10. Black Cake is in development as a Hulu original series produced by Marissa Jo Cerar, Oprah Winfrey (Harpo Films), and Kapital Entertainment. How do you envision the story will change as it plays out on a television (or computer!) screen as opposed to on the page?
It’s a bit early in the process to say, but I am thrilled that Black Cake is inspiring producers I admire so much to develop a multi-part series. I’m looking forward to seeing how that plays out.

Charmaine Wilkerson is an American writer who has lived in Jamaica and is based in Italy. A graduate of Barnard College and Stanford University, she is a former journalist whose award-winning short fiction has appeared in various magazines and anthologies. Black Cake is her first novel.