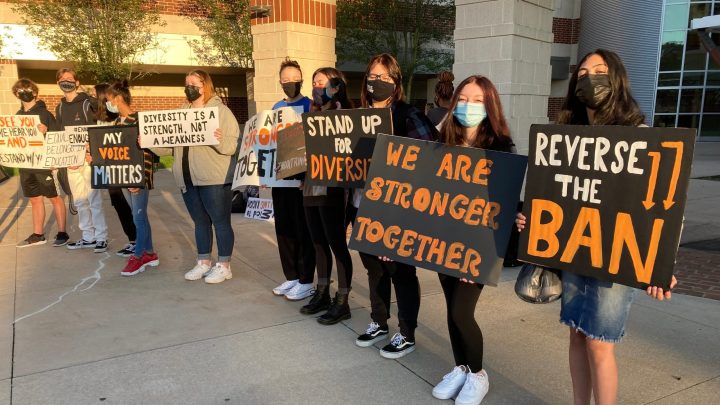 Students outside of Central York High School on September 10 to protest the ban. Photo by Jack Lanyard/York Daily Record

Today on The PEN Pod, we spoke with students Edha Gupta, Christina Ellis, and Rebecca Delgado, and teacher Patricia Jackson, of Pennsylvania’s Central York School District. In August, the Central York School District attempted to enact a ban on the use of hundreds of diverse materials for classroom instruction, all of which were created by people of color. Edha, Christina, and Rebecca attend Central York High School and are officers of their school’s Panther Anti-Racist Union, and they initiated protests in the district, which helped lead to an overturning of the ban. We spoke with these students and their teacher about how they learned about the ban, why they felt compelled to protest it, and why diverse materials are of critical importance in the classroom. Listen below for our full conversation.

On the Implementation of the Book Ban

EDHA GUPTA, STUDENT: “Not many people were even aware that this was happening. I as a student found out a whole month after the teachers had found out, from a secondary source article. So this information was not really disseminated in any way, and I can imagine their reason for that, looking at our outcries for change, but I have reason to believe that this decision was made by a small group of people, of board members, and only some parents in the district who actually wanted this decision to be enacted.”

On the Materials Identified for Deselection

PATRICIA JACKSON, TEACHER: “The classroom is where you come together. Where you trust your teachers, you trust your educators, and respect their authority to do what they need to do, to help the children understand what it means to get along, where the mistakes were made, and make sure mistakes aren’t made again. What was shocking to me was the number of children’s books that were banned—children’s books about self-love, self-acceptance, loving your hair, loving your skin color, loving other people regardless of their ethnicity, their religion, their skin color. That was shocking to me because there is no excuse under the sun, how you can look at a book like I Am Enough, or The Story of Rosa Parks, and even utter the syllables ‘CRT.’”

On Why Protests Were Necessary

REBECCA DELGADO, STUDENT: “We saw. . . what was happening at our school and we wanted to take immediate action, and honestly, didn’t want to ask anybody for permission. Because we knew we had to do it.”

GUPTA: “Equality and feeling included in your school, by your teachers, by your peers, and feeling seen, feeling heard, and loving yourself, is something that should already be included in the school curriculum. It is not something that should be protested for. But if it is something that we have to protest for, I have no problem doing that. I have been a student at this district for 12 years, since I was in preschool. And because of the discrimination I faced because of the stagnant ineducation about where I came from, my culture, and my self, there was a lot of ignorance that I faced, and things that hurt me personally, that wounded me—so much so that it is still taking me a long time to recover and heal and love myself and be that person, to fully embrace my culture and my ethnicity and my background. So I know how important these resources are to students, and I will fight for students—we will fight for students—as much as we need to to make sure that these materials are in the classroom, because as much as people think it doesn’t matter, it really does. People say, ‘Well, they’re not taking them off the shelves.’ Even if they’re not taking them off the shelves, teachers are afraid to use these books about inclusion and diversity in their read-alouds. And what type of messages is the board sending to students of color in the district by banning these materials in the first place?”

On Why Diverse Materials Are Important

CHRISTINA ELLIS, STUDENT: “I think it’s unacceptable for a little Black girl, who’s in a public school, [who] goes to a library, and can’t find a book that represents her. I think it’s unacceptable that a little Indian girl, or a boy, or whoever, goes to a library of the public school and cannot find a book that represents them. And that’s the problem. That’s the issue.”

The PEN Pod: Reflecting on the Impacts of Hurricane Maria with Ricia Chansky and Zaira Arvelo Alicea

The PEN Pod: On Our Gala, Free Speech in Higher Ed, and Facebook Algorithms with Suzanne Nossel