The PEN Pod: Literature as a Meditative COVID Companion with Lulu Miller 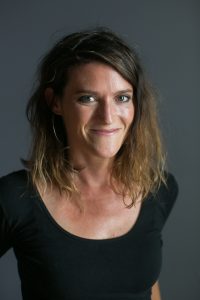 Today on The PEN Pod, we are joined by writer and reporter Lulu Miller. Lulu is the co-founder of NPR’s Invisibilia. In her debut book, Why Fish Don’t Exist, she recounts the story of turn-of-the-century scientist and taxonomist David Starr Jordan, who was credited with discovering nearly a fifth of the fish known to humans in his day, despite cataclysmic setbacks, including the destruction of his specimen collections in the 1906 San Francisco earthquake. We spoke with Lulu about her book and its particular relevance in this moment across the globe, the importance of resilience, and how to remain optimistic in the face of adversity. Listen below for our full conversation (our interview with Lulu is up until the 9:30 mark).

Who was David Starr Jordan, and when did you first hear about him?
He was kind of a Renaissance man for his time, which was the late 1800s and early 1900s. He was a wildly successful fish biologist. By successful, I mean that he was responsible for discovering hundreds and hundreds of species of fish. He claimed responsibility for nearly a fifth of the fish known to man in his day, so that’s like a huge portion of the tree of life that he helped to uncover. He became the first president of Stanford. He was an advocate for peace, and he was really successful in many different domains.

I heard about him just anecdotally. I heard this tiny little detail about him when I was in my early twenties, starting out as a science reporter. When his life’s work was nearly destroyed in the 1906 earthquake, when his collection of fish in glass jars shattered, he was just unfazed and kept moving forward. I wondered about him. I wondered what gave him the courage to keep going on after destruction. And so, I started to look into his story, and that’s when things completely spiraled for me.

“The book really does look at resilience, and what becomes of you when you are optimistic in the face of unthinkable tragedy, failure, and destruction. On one hand, I wondered, ‘Does that lead you into danger?’ We hear of Icarus, time and time again—hubris is dangerous. But then at the same time, we get this cultural message that grit and perseverance is the stuff of heroes.”

The book reads a little bit like a biography, but it’s not just about him—it’s about a certain degree of resilience in your own life.
The book really kind of took this braid of his story and my own. I tried to write it almost like a dark fairy tale that is 100 percent true. So my hope for it is that it reads much more like a fairy tale. That’s why I had my friend do these gorgeous engravings that are in the book. Jordan’s story ends up taking these twists and turns that are so surprising, and in certain ways, the book really does look at resilience, and what becomes of you when you are optimistic in the face of unthinkable tragedy, failure, and destruction. On one hand, I wondered, “Does that lead you into danger?” We hear of Icarus, time and time again—hubris is dangerous. But then at the same time, we get this cultural message that grit and perseverance is the stuff of heroes. This book looks at both of those things and shows a complicated tale about confidence. It’s hard to talk about ’cause there’s some twists and turns that I don’t want to give away, but it is a wacky, wacky tale with, I think, huge implications for us today, too.

Amid this pandemic, we’re all facing varying degrees of incredible adversity. How do you think people are gonna read this book right now?
I’ve started to get some early reviews from readers, and I think people are saying that it’s helping. It’s not that long of a read. I’ve had quite a few people say they ended up staying up all night to finish it. Someone actually just wrote today that it cured their readers’ block because they’ve been so distracted that this actually sucked them in. So maybe it’s a good distraction because it moves quickly.

But the thing that I hope it gives people, is that it is truly an examination of how to move on after chaos upends everything. I think there are some real useful lessons, not just from David Starr Jordan, but also from some of the other people his story ends up leading me into, like Anna and Mary, who were touched by his life—two women who are alive today—who just talk about how to be creative and how to find meaning in the darkest, loneliest times. I think that stuff, hopefully, will be a little bit helpful—some kind of salve. I think there’s real darkness, but hopefully there’s humor in it too. My hope is just that it could be a meditative companion for this moment.

“I think the intensity of the moment is making ideas gurgle up and also just making reading and listening, when there is time, just so soothing. I am just hungry for what other people have to say about this moment in a way that isn’t just news or numbers.”

Are you finding this a productive time?
I am finding it, like, the biggest roller coaster, honestly. There have been days when I’ve had all these essay ideas, and honestly, I’m stealing moments. I have a one-and-a-half-year-old, so I’ve been juggling daycare with my wife. We’re both trying to fit full days, and it’s exhausting.

There are these weird, stretched-out moments where I’ll be on a walk with him, and I’m suddenly getting an idea about language and this moment and our fear of the unknown, and I’ll just record it into my voice memos ’cause that’s the one minute I have. I think the intensity of the moment is making ideas gurgle up and also just making reading and listening, when there is time, just so soothing. I am just hungry for what other people have to say about this moment in a way that isn’t just news or numbers.

Is there anything in particular that you’re reading right now that’s giving you some of that distraction, entertainment, or context?
Yes. I actually have it with me right here—it has nothing to do with the moment—this book, The Third Rainbow Girl, by Emma Copley Eisenberg. It’s a new nonfiction book, and I think it’s maybe technically been filed as true crime, but she really rebels against that definition. It’s a story of a double murder in Appalachia, of these two women who are at a music festival. But the author, Emma Eisenberg, was a fiction writer for years, and this is her first time doing reporting and nonfiction. She is an amazing journalist, but the fiction background she brings to this—she’s fleshing out every character, every historical moment, and it is the most complex. It’s partly about this murder, which adds this inherent suspense and intrigue because you wonder what to make of it, but it is so much more about culture and society.

What’s thrilling me about her writing is that she’s really interested in the sort of space in between and examining every single person and the factors, cultural and personal, that made them involved in this moment. I keep underlining lines because it is so deep about how we deal with the unknown. I think, at the end of the day, this is about an unsolved murder, and what we do in the face of that has weird resonances to all the uncertainty we’re dealing with now. I’m obsessed with it. This book is so beautiful. I highly recommend it.

The PEN Pod: Claiming Ourselves Through Language with Jose Antonio Vargas

The PEN Pod: Letting Go of Our Illusions with Charles Yu