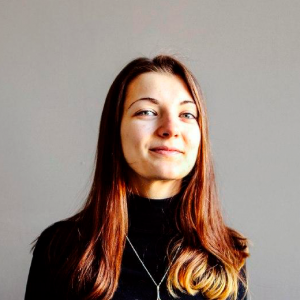 Today on The PEN Pod, we spoke with poet and translator Hanna Komar, who is a secretary of PEN Belarus. We at PEN America have been closely monitoring the situation in Belarus, and we are deeply alarmed by the attacks on free speech and free expression taking place almost daily in the streets of Minsk and other Belorusian cities, following the disputed election of longtime president Alexander Lukashenko. Hanna is among the thousands who faced arrest in order to demonstrate with the people of Belarus, spending more than a week in prison for participating in a peaceful demonstration. She joined us today to discuss PEN Belarus’s involvement in the recent protests, the courage to resist political violence, and how people outside of Belarus can support the fight against the country’s dictatorship. Sign PEN America’s open letter in solidarity with the people of Belarus. Listen below for our full conversation (our interview with Hanna is up until the 10:02 mark).

Hanna, firstly, how are you? I understand that right now in your street, on your block, there are demonstrations happening, and police are cracking down.
That’s right. That was both expected and not. I’d say it’s been brutal. I didn’t expect this brutality, because this is the kind that happened on the ninth of August—the ninth, and tenth, and eleventh of August. We didn’t expect it now, because we saw that they’ve become wilder so to say, but we didn’t expect it tonight.

“The support is immense—people support each other in all possible ways. Being part of that gives me strength and courage to keep going, because it’s such a turning point in history. Also, this feeling that we are creating history now, we are able to do it finally, after so many years of this helplessness. We finally are not helpless and not hopeless. We can change, and we will change it for the better.”

For those who don’t quite know the whole extent of what’s happening—what does PEN Belarus do, and how have you and other members of PEN Belarus been involved in the recent protests?
We focus on the Belarusian literature mostly, and we develop Belarusian culture and defend freedom of expression. We also protect the rights, or try to defend the rights of writers, journalists, and other literary women and men. That involves, say, organizing festivals and literary awards, as well as a program monitoring violations of the rights of cultural workers, among other things. PEN Members, as well as many other cultural workers, have been actively participating in the resistance. They’ve been organizing and taking part in the solidarity actions—they’ve been joining women’s marches on Saturdays and the big ones on Sundays, and they’ve been writing texts and supporting the communities in all possible ways.

You were taking part in a demonstration when you, and a number of your colleagues, were arrested. What happened?
We were taking part in the demonstration to support Maria Kolesnikava and some other activists who were detained on that day, and the day before. As we were walking peacefully, the riot police encircled us and blocked the road. We were standing against the wall, so they pressed us to the wall. We stood there, this human chain link, locked to protect ourselves. They wanted to take the men—there were a lot of women, mostly women—but then they wanted to take the men somehow anyway, which we didn’t allow them to do. They started to quite brutally pull women out one by one, and some people fell down on the ground, myself as well. Then, they would drag them to the police vans. So, that happened to me. Actually, I don’t remember quite well because it was such a traumatic scene and such a traumatic moment for me. But I remember shouting at them that they were violating our human rights, something like that. They were actually not touching me until one—I think it was maybe their head—he came up to me swearing, took me, and brought me to the police van. Then, I was sentenced to nine days of arrest for participating in unauthorized—or what they call unauthorized—assembly.

“I, and we as an organization, and we as Belarusians fighting for our freedom, want the world to know that Lukashenko is not our president, because we didn’t vote for him. The majority didn’t vote for him, so he’s not the legitimate president. . . Also, as Svetlana Alexievich, the Nobel Prize winner, once said, ‘We are a small country,’ and—I’m afraid—we can’t make it on our own. We do need support on all possible levels.”

For those of us outside of Belarus, it’s hard to totally understand how much courage and bravery it takes to stand up and go to the streets, especially in a system where there really is a lock on political control and political violence. How do you find that strength? How do you find that bravery alongside your colleagues?
I think we just sense that it’s that very moment that we can’t miss, that maybe for the first time over these 26 years—or, at least over the last 20 years—we are so close to the victory, to getting rid of the dictator. The solidarity is very strong, maybe stronger than ever. Also, all of a sudden, we can see that we are not alone—I can see that I’m not lonely. For example, for many years I felt like an outsider—or an outcast—with my values, such as respect for human rights and dignity. Then, all of a sudden, now I can see there are millions, and when you’re part of the millions of people, it’s such a powerful driving force and it gives you strength. The support is immense—people support each other in all possible ways. Being part of that gives me strength and courage to keep going, because it’s such a turning point in history. Also, this feeling that we are creating history now, we are able to do it finally, after so many years of this helplessness. We finally are not helpless and not hopeless. We can change, and we will change it for the better.

Lastly, what do you want people outside of Belarus to know about what’s happening there, and how can we support you?
I, and we as an organization, and we as Belarusians fighting for our freedom, want the world to know that Lukashenko is not our president, because we didn’t vote for him. The majority didn’t vote for him, so he’s not the legitimate president, and his government is not the legitimate government. Also, as Svetlana Alexievich, the Nobel Prize winner, once said, “We are a small country,” and—I’m afraid—we can’t make it on our own. We do need support on all possible levels. I think what people outside of Belarus could do is make themselves aware of what’s going on. Luckily, the coverage of the events has been really great internationally. So, they can make themselves aware, and then they can spread the information—post it on social networks, tag their friends, tag organizations, tag decision makers and politicians and everybody who could somehow affect our government. That’s what people can do, and they can support our initiatives here. People can also arrange their own solidarity events, outside Belarus, and support ours, including fundraising campaigns. This is very important, as a lot of people do need help, and that involves financial help as well. If one wants to help but doesn’t know how, they could certainly email us, and we would be happy to provide that information.

The PEN Pod: On the Lines Between Fact and Fiction with Ayad Akhtar