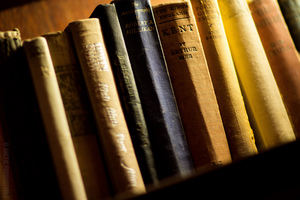 The Illiterate Man is translated from the original French. Read Ramadan’s essay on translating Bouanani here.

I tell myself each day: if you want to see the black dogs of your childhood again, give yourself a reason. Throw your hair into the river of lies, plunge, plunge further still into the blood of insanity. The masks don’t matter, but give yourself a reason and die if necessary among the bald heads, the shanty town kids who eat grasshoppers and hot moons, and the black dogs that play in the garbage dumps of the suburbs.

the seasons rained colors, the moon rained legendary dragons. The beneficent sky opened onto white cavaliers. Just as the coquettish old women sang over the terraces of Casablanca.

a child lured the moon into a trap. Ten years later, he found it again old and all pale, even older than the old women without mirrors, the mustachioed grandmothers arguing endlessly like rank rain.

he understood that the seasons of colors were an invention of the ancestors.

the death of trees, the death of giants. Ghalia Bent El Mansour didn’t live beyond the seven seas in an emerald castle on the backs of eagles. He met her in the neighborhood of Ben M’Sik or else at the Carrières Centrales, near the fairground kiosks. She wore plastic shoes and prostituted herself to the bicycle repairman.

There was nothing left to do but slam the doors to the sky.

So, hands ablaze, I restarted the suns.

My illness is a barbaric world that claims to have no arithmetic, no calculations.

I cover the sewers and the garbage dumps,

Listen, listen to me.

Under what law is the chicken permitted to fly higher than the eagle?

In its dreams the fish would like to jump to seventh heaven.

I built terraces and entire cities. Casablanca lived under the American bomb. My aunt trembled on the stairs and thought she saw the sky’s stomach split open. My brother M’hammed made Charlot and Dick Tracy dance with the flame of a candle. My mother…

Must I really go back to the house with the shutters?

The stairs infested with an army of rats, the nude woman with hands of sorcery, Allal raping Milouda in a pool of blood, and the Senegalese

Must I really go back to the house with the shutters?

The sentinel washes his feet with your tears. Your most beloved dream topples over in the barbaric world of day and moon.

You do not stand up.

Your equations in your pockets,

the world on the horns of the ox,

the fish in the cloud,

the cloud in the drop of water,

and the drop of water containing infinity.

The walls of the sky bleed from every pore.

The dogs burst into a barbaric song. A Kabyle song or a Targuie legend, perhaps it’s simply a tale, and this tale ends by falling into the stream.

He puts on paper sandals,

goes out into the street,

looks at his feet

The walls of the sky bleed from every pore.

The wind, the clouds, the land and the forest, the men

Behind the sun, the officers

A man is dead, a 7.65 mm bullet to the neck. And then, here is an old woman lamenting, here is another recounting stories of milk and honey about the son of a nasty lumberjack who wins half a kingdom by decapitating a ghoul’s seven heads…

The thrilled wind suddenly rises to its knees, extinguishes the fire under the cooking pot, tumbles down the stairs and

goes to play on the cobblestones of the rue de Monastir telling the same lewd stories to the surrounding windows. And with chest full, and eyes on fire, the houses and the terraces, and even the sun emerged from an empty silo break through the ceiling straight to my bed.

the use of speech.

Of the things I loved the most

I want to keep my memory intact.

A song is born. Was it a song?

Of the things I loved the most I want to keep my memory intact. But, suddenly,

places get confused with other places, names fall one by one to their deaths.

A blue hill spoke. Where was it? A song is born. My memory wakes up, my steps no longer know the paths, my eyes no longer know the house or the terraces, the house in former days populated with flowers and a rosary of the Kaaba. The world, no bigger than a newspaper. In this world, there is no delirious wind or dancing houses,

the roar of shovels

Victor Hugo drank from a skull to the health of the barricades. Mayakovsky unseated the clouds in the radio cities. We had to search for the flute of vertebra in the cemeteries of the future. Today, I must defuse the love songs, the butterflies smoke their pipes, the flowers have the wolf’s skin, the innocent birds get drunk off of beer, some even conceal a revolver, a knife. My heart rented a bachelor pad at the bottom of my legs…

The children of the sun, will they still end up as

Where did he go, the one who made the dead in the countryside tremble? and that one who, bending his arm, shattered a sugarloaf? and that one who disappeared by the entrance of the sewers after overturning a battalion of trucks and jeeps?

All the memories are open,

but the wind has carried away the words,

but the streams have carried away the words.

We are left with strange words

that would be astonished at the sight of a camel.

To take shelter from the rain, Mririda threw herself into the stream.

At school we eat oats.

The secret phrase no longer liberates.

Will that child never recover? My sister, prepare for him the recipe I indicated, and don’t forget to crush the bird in the mortar, it’s good for the health! But really, what is he suffering from? You see, my father wasn’t in the war. He inherited from his ancestors a chest full of books and manuscripts. He spent entire nights reading them. Once, he fell asleep, and when he woke up, he went crazy. For fifteen days, he believed he was living in a very very deep well. He dug, dug furiously, but he never managed to reach the groundwater. He was extremely thirsty. On the sixteenth day, my mother made him a precious talisman that restored his reason. Except, that day, he became illiterate. He could not even write his name. When he rediscovered the chest, he took an axe and smashed it to pieces. My mother seized the opportunity to cook the head of the sheep for Aïd el-Kébir.

Still today, when I ask my father where the books and manuscripts went, he looks at me for a long time and replies:

I believe, I do believe that I left them at the bottom of the well.

Ahmed Bouanani was a Moroccan writer, poet, filmmaker, illustrator, and a leading figure of the Moroccan intelligentsia of his time. He is the author of four published works—L’Hôpital and three books of poetry—though much of his writing is as yet unpublished. Bouanani contributed poetry and essays to Souffles, a literary journal run by a group of artists and intellectuals. Bouanani left behind chests full of unpublished manuscripts, drawings, and screenplays. Although much of Bouanani’s work still awaits publication, Lara Vergnaud’s English translation of The Hospital is forthcoming from New Directions.

Emma Ramadan translates from Providence, Rhode Island where she is also co-owner of Riffraff bookstore and bar. Her translations include Sphinx by Anne Garréta, Monospace by Anne Parian, 33 Flat Sonnets by Frédéric Forte, and The Curious Case of Dassoukine’s Trousers by Fouad Laroui. She recently spent a year in Morocco on a Fulbright grant to catalog and translate the archives of Ahmed Bouanani, with the help of his daughter, Touda Bouanani, and the Dar al-Ma’mûn artist residency.

To be free. To find liberation. To demand justice. All hot words. All still within our reach. But the articulation of the anger is the belly of my poems. The refusal to sit silent is the fuel. I aim to burn the whole thang down. With righteous anger & righteous love. & joy.

The @penworldvoices team curated this week's reading list of classic and contemporary novels, essay collections, and poetry collections by Black writers with titles that inform one another, build off of one another, and celebrate one another: https://bit.ly/2XB2cDl.