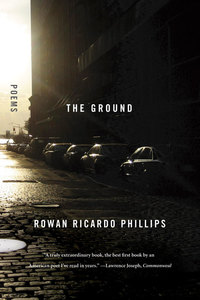 I plugged my poem into a manhole cover
That flamed into the first guitar,
Jarred the asphalt and tar to ash,
And made from where there once was
Ground a sound instead to stand on.

That I can’t recall my first glimpse of my mother:
Alien-eyed, wrapped in alien cloth, how could
I? Once she held me she just was my mother,

Thats just how it goes. This is just one of many
Beautiful moments I’ve been a part of but can’t
(And won’t ever) remember. That’s just life, I guess.

The void. That’s just a part of life: some hidden cave
Sunk deep in the mind and built for Beautiful But
Can’t Remember. I saw it once: here dissolving,

There reassembling like gleaned second-long seasons.
And for what reason? I just don’t know. Years asking
Myself Why? Why can we not remember this? passed.

Are we here because the mere dust of stars torched
In the throat of an equation? It’s a cold thought,
I know. But belief just burns brighter in the cold,

Brighter as the first idea flares and reverses
Like the first new motion of that first majestic
Ocean just as it discovered impregnable ground.

EMBRACE THE NIGHT AND GET THEE GONE

Talking picture. Silent poem.
New York shakes off the fall.
Tonight
I work in a silence
That prays the rare turn to sound.
I make nothing. I am fractured.
I walk in the dark egg of
Another September night
That is cool, that is
Cool as though the moon is a mouth
That blows on its wound.
We are early in the life of the poet.
He knows so little of light,
So little of shadow. He knows down
Town as a metaphor. He knows
The constellations are at work tonight
Whoring their stories of strife.
He’s in search of life. A poem’s
In search of its body. Down
Toward the river.
The skyline
Broaches its phalanx of broken teeth
And up above the grounded sky the sky grinds down the stars.

And up above in the grounded sky the sky grinds down. The stars
Broach its phalanx of broken teeth.
The skyline
Toward the river
Searches for its body: downed,
Dammed up, beached; like the end of a poem
Walled up against competitive life.
The constellations are at work tonight.
Betelgeuse. Bellatrix. The hunter’s bow
In elegy graffitied across the endless black gate.
We know so little of light:
It dies though we are early in its life.
A beautiful night. Its lambent moon
Lets down a light hat only happens in September.
Say it. September. Fragile
As an egg now. Teetering. Parabolic.
Broken teeth in the mouth
That prays the rare turn to sound.
I work through the silence.

Embrace the night and get thee gone.

PROPER NAMES IN THE LYRICS OF TROUBADOURS

My parents never call me Rowan.
I’m Ricky, from Ricardo.
But not Ricky Ricardo.

I’m also the first Phillips in my family.
My mother decided Phillip, my father’s
Family name, sounded too much like a first name.

(In America, at least).
Rowan Phillip would lead inevitably
To Phillip Rowan. That was her story, and she’s sticking to it.

For the record, that’s an Old Norse first name,
A Spanish middle name,
And one of those faux-English-faux-Dutch-sounding last names

Thats really Greek for lover of horses.
“Rowan Ricardo Phillips”:
Another of those names that straddles seas in the sails of unseen

Ships. Still, it sounds typically West Indian to me.
And like “the West Indies” indefinite.
An indefinite noun in an indefinite poem.

It took me a while to accept it.