The End of the Dark Era 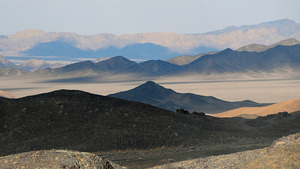 My Thoughts, You Are Brief,
But Are You Not Like a Father’s Words?

2
Like a donkey, I struggle on,
excusing my mistakes
in everything I’ve understood, in all that I’ve created.
What thought has said to me
came late, yet it was wise,
and how is my braying
different from a donkey’s?
If you speak, o master,
don’t reprimand me.
The bright yellow sun
teems amid golden rain…
Like earthly messengers,
these acts will spread,
rise up
like flowers
in a year of drought.

3
In this colorful world, you and I
are not sad that we weren’t born
in a land of birds.
For thirty years
in my brain, the thought
that I would have your name
forever,
that this voice
would always be serene,
raised me high.
I’ll wear away the inexhaustible time,
by making today eternal.

Brief in Eternal Blue Memory, Tomorrow’s Tender Sky,
or the Presentiment of Movement

The eternal blue sky,
along which silver fishes move,
grows angry, but
holds the faith and clears up quickly.
The mind of a kindly woman,
paying attention to the milk of love,
counts off the days,
wishing for birds from stories.
Deep in the thoughts of the man
who rushes towards the tryst they rest their wings,
thinking of those left behind, exposed,
remembering the warmth of the words
whispered into the dusty shadows.
Truly the dreams of faithfulness awaken,
and one morning in the future, the sky will clear.

The two red cords of desire
unroll across the great boundless expanse.
Rays fall from the sun to the earth,
by night they are lost, in the sound of crickets at evening
noises grasp one another,
the sun rises
in the morning sky.
We wait for time,
which snatches at a thread, as at desire’s hand,
we shoot at it with wisdom.
Intuition, like a chain,
is transformed in the sun,
in the light of our yearning, it is ripped apart by warmth,
it whips the shadows.
In the night of thought
the two red cords of desire intersect,
and the closer the cords come together,
the stronger they become.
The sun falls to earth,
burns upwards into the sky.
The bronze brazier of harmonious feelings
sends fire to the sun.
It joins with the sun’s rays,
it flows against the sun’s rays.

A Man Riding a Copper Horse Imagines Flying to the Clouds

A wild red lion god
jogs out in contemplation before beauty,
dropping dark milk.
He is spirit.
Measuring prayer,
erecting calm protection,
everything
is empty, as though free from qualities, and
boundless.
Earning a living through positive and negative charges,
frustrated by the search for a single word,
I berate Heaven,
I gulp down this single word,
and bring forth an iron sweat.
Have I confused myself?
No,
there is a catch in my reward today and tomorrow.
But there is no reason to boast.
I gallop on, not stopping to drink the wind.
My body, blazing with intelligence,
is worn down,
it fades into my horse, it doesn’t burn,
my steed is a copper horse.

I Know How, Consumed by the Burning Fire
of Old Age, the Copper Horse Grows Weary,
but It Is Not So

The Engine of Eternity Which Surrounds Me

Desire is a planet,
and I am contained by longing,
a triangle of equal sides.
At the point where we meet,
I observe
that I, in the form of a heart,
am struggling towards you.
Character is a direct line,
I move against you,
we intersect, an addition sign.
Life is a rectangle,
I gallop with you, three angles
according to the laws of equilaterals.

If I Could, I Would Gallop Out on You,
You Winged Stone Horse, Flown from My Thoughts

I feel how the winged stone horse, flown from my thoughts,
has just come to earth
like a wounded bird
with too much faith.
It moves, moves
between the sharp blades which mark out truth and lies,
it cherishes the smiling flowers of crystal,
scorched in the fiery sun.
Now I am sitting before you.
Needless to say,
these truths are not marked
with the addition of error.
Listen my dear, listen!
I will cherish, I will cherish the flowers of crystal,
my dear, listen to me, listen!
These true words are my truth.

On a Tiny Island in the Ocean,
the Rising Light from an Unextinguishable Fire
Has Created a Reddened Poetry

I shall look for the fire, sending up light
in lines of flames on the far shore.
Over and again, the wind
moves to flare and flash against the sky.
It gleams indistinctly, as it always does.
As I wonder whether suddenly it will die and fade into the earth,
so in the dark, its light remains day and night unextinguished,
but it is never lost to the daytime sun.
Thinking constantly about that far shore,
my eyes gaze toward the shining island.
Their little wings neither feeding nor smothering the flames,
my desires will warm themselves on their own heat.

Ts. Oidov (b. 1953) is a Mongolian poet, sculptor, and artist. During the 1970s, he was one of the founders of the Gal (Fire) group of writers and intellectuals, who sought to promote Mongolian traditional culture whilst retaining their individuality in the face of state censorship. Following the democratic revolution of 1989-90, he was asked to design the Mongolian State Seal, and is now widely respected as one of the country’s foremost artists.

Simon Wickhamsmith is a scholar and translator of contemporary Mongolian literature. He teaches in the Writing and Asian Studies programs at Rutgers University.

The End of the Dark Era will be published in the summer of 2016 by Phoneme Press/PEN Center USA.