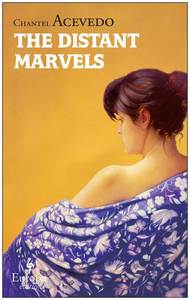 This piece was submitted by Chantel Acevedo as part of the 2015 PEN World Voices Online Anthology.

This Cuban woman, so beautiful, so heroic, so selfless, a flower to be loved, a star to gaze upon, a shield to endure.

An unexpected envelope was delivered to me two months ago, on the first day of August. The outer package displayed the address of the University of Havana, Department of History in blue ink and a symmetrical print. My name was written in a different hand, and my address in yet another, as if the package had passed from person to person, each contributing some element to its outward appearance. Unnerved by all of those invisible hands, I left the package untouched all afternoon. But I could feel its presence, like fingers reaching into my purse, or trying to lift my skirt slowly. Accustomed to being alone, the package began to feel like an intrusion, and I could no longer stand it.

So, I opened it. Inside there was a pair of letters. The first, new and crisp, the blue ink rubbing off on my fingers, explained the second, which was old and crumbling. María Sirena, it began, casually, impertinently, as if I were an old friend, we believe this letter belongs to you. It has been housed in our archives, unopened, for many decades. The letter, it was explained, was waylaid somehow at the turn of the century, had turned up in a collection of war-era correspondences sold at auction, and acquired by an alumnus of the university. An ingenious student, they wrote, had tracked me down as part of his thesis. And on it went, describing the historical effort to preserve what was most important, and find homes for the insignificant.

With one glance at the faded postal stamps, my heart began to pound.

I worked the brittle flap open, chips of paper falling like confetti. I pulled out an article from an American newspaper, so fragile that tiny parts of the paper crumbled to dust, etching out words and individual letters, as if the thing were censoring itself before my eyes. Another page, this one made of onion-skin, upon which a Spanish translation of the article had been written in delicate, old-fashioned penmanship, held my attention for a moment until a small square of stiff paper fluttered to the floor from within the envelope.

I bent down and saw that it was a picture of my little boy. My hands, holding the envelope and pages, curled into question marks, and then all of the contents of the package, those unwanted, insignificant things to the historians at the university, slipped to the floor.

That day, I sat on the floor and read the article again and again. I put the picture in my bra, close to my skin, until a corner of it bent, then, I wept for that small damage. I could not undo the crease, but I found a frame for the picture, one deep enough to house the article and translation with it. I whispered the diminutive of his name, the only name I ever spoke to him, “Mayito,” and wondered at the way the envelope had found its way to Maisí, and my little cottage by the sea.

1   Waiting for the Sea to Come

My next-door neighbor, Ada, treads through the sand wearing plastic sandals that flap against her hard heels. I hear her before I see her. She’s come to my back porch to warn me of a storm in the Atlantic. It does not matter to Ada that I can see for myself the ferocious churn of the sky, like a black mouth opening and closing, and the white, teeth-like caps of the waves. She has a television, and has become the ears of the neighborhood, watching reporters all day, then, broadcasting the news from house to house. She says the storm began off the coast of Africa, that they named it Huracán Flora, and that already, in Haiti, the sea itself had been wrenched away, revealing a sunken ship for a moment before the water came crashing back down. The storm is said to be bigger than all of Cuba, and Ada says I should be worried.

“You needn’t have come,” I tell her, and point at the sky. “I don’t need a television to tell me what’s coming. Cobbled sky,” I say, but don’t finish the old adage—cielo pedrado, piso mojado. Cobbled sky, wet ground.

The pregnant clouds race one another in the sky. In the sand, blue crabs scuttle towards rocks, forcing themselves into nooks and crannies. Ada and I watch them for a moment from my back porch. The movement in the sky and on the ground is disorienting, and I feel a touch of vertigo.

“They’re opening the old governor’s mansion in Santiago to those of us on the coast. For safety’s sake,” Ada says, reaching out her hand to me as if I would take it, come out of my chair, and abandon my house to the winds.

“Me quedo aquí,” I tell her, and face the sea again.

“What would Beatríz think?” she asks me, her mouth pursed.

My eyes prickle, and I blink them hard. “I haven’t heard from her in weeks. She’s an Habanera now, didn’t you know?” A small crab makes its way towards my foot, as if it wants to get into the house. It opens a tiny, cobalt claw at me. First Ada’s outstretched hand, then the crab’s claw. I am besieged.

“Déjame,” I say quietly. The roiling surf is calming. I feel right by the sea. “And besides,” I say then, completing my thoughts aloud. “I won’t step foot in that mansion.”

Ada groans and sits beside me. The wicker couch creaks and the wind whips her skirt about. She is seventy-three, nine years younger than I. But nine years seem to be just enough to make a difference. Ada’s ankles have not yet begun to swell just from sitting. She has not yet discovered the disquieting tendency to fall over for no good reason, as if the earth has tilted suddenly, playing a child’s practical joke on her.

“Beatríz will come for you,” Ada insists.

“That is an old dream, Adita,” I say, and lay my hand over hers. My daughter is a woman of the city now, or so she says. She has become the kind of person who sets foot in a house and immediately begins to criticize it. “That old rug has holes in it, Mami,” or “Why don’t you dye your hair?” Once, I asked if she was ashamed of me, and she waved her hands in the air as if performing a magic trick, and said nothing.

“It’s coming here, to Maisí,” Ada says. “We must go.” She grips my hand hard, stands, and tugs, trying to lift me.

“You want the sea to swallow you?” Ada yells. The crabs still at the sound for a moment, then resume their crawl across the beach.

“It might be preferable,” I say, and Ada’s eyes film with tears. Were she to walk into my bedroom these days with the kind of confidence she bears when in my house, as if every room were hers as well, Ada would see the dozen unfilled doctor’s prescriptions on my dresser. But she only searches my face for an explanation I do not give her.

Once more, I say, “Déjame,” and this time, Ada leaves without a sound, though I can tell, by the way her arms are moving, that she is wiping her eyes.

Ada will be back, I know. She will take the time to pack up her cottage. Her daughter-in-law, Panchita, will come over with her grandsons, strapping boys with piercing blue eyes. Ada, who never brags about her great-grandchildren, knowing that it would hurt me, will shuffle behind the boys, touching them on the shoulders to get their attention, her eyes swallowing them up. They will load her valuable things into their car (for Ada’s son, Miguel, owns a bright blue 57 Ford Fairlane that roars up and down the street, startling me each time), and drive west, keeping inland, getting as far as Matanzas, maybe. I will watch all of this from right here, this seat.

I plan on not moving at all.

This piece is excerpted from The Distant Marvels by Chantel Acevedo, Europa Editions (2015).