The Chains That Keep 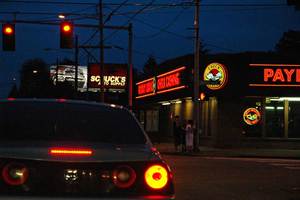 The Chains That Keep

I usually idle by Spades Check Cashing on 8th Ave. and catch folks that way. The Homestead cops, they moved stations from a little up Amity to down on 7th, which is closer to Spades, but they leave me alone. I’ve drove jitneys almost ten years. Only been cited twice, arrested once. My woman, she don’t mind my work. We never married or nothing, so it’s okay to stay out; sometimes I think she wants a child, and I wouldn’t mind that, but the extra cash is good.

Kid knocks on my window. Young dark-skinned dude, probably needs to go up West St. Couple bucks. I roll down my window. “Need a ride?”

He says, “Yes sir,” real polite. Funny ‘cause he looks like a little thug. Zip-up jacket and saggy jeans. “How much to the Greyhound station, sir?”

“Downtown? Shit.” That’s farther than I like going. I think it over. It’s late—I just finished a cup of coffee, but I’m still tired. The kid seems jittery. He keeps holding at his side. Behind him’s two bags on the curb. He needs the ride; I cut him a break. “Ten bucks okay?”

The kid grins; probably the first good thing he’s heard all day. I unlock the doors. He sits in the back, puts one bag next to him and the other on his lap.

“I ain’t holding, if you’re nervous.”

I adjust my rearview. The kid’s sweating. I start to drive and stay quiet. Once we’re across the High Level bridge and heading towards Pittsburgh, I say, “So what’s going on?”

He’s off-guard with that. “Just need to get a bus.”

He says, “Yessir,” instantly, like he’s said it to a dozen officers.

He messes with the bag in his lap, finally looks up at me. “Al.”

His eyes shift around. “Thanks for the ride, Jerome.”

He don’t answer; he’s muttering to himself, legs shaking, and playing with the one bag. Drugs or whatever inside. Something. I don’t ask. He sees me staring through the rearview and stops. Every streetlight we pass, his face gets shinier. He unzips his jacket, I notice blood on his shirt. Stabbed, probably. This thug shit ain’t working for him.

“Seein’ Grammy for a while?”

He’s more comfortable with that. “Yes, sir… For a while.”

It’s about a quarter till so I take some shortcuts. Dude’s still messing with his bag. I tell him it’s okay.

He smiles. “Big girl, got short hair, keeps it did good.”

“That’s half my rides on rainy days.”

He frowns, presses his side again. His face is just black, outlined with sweat, two big eyes in the middle. “She rides jitneys sometimes, so, you know, if you see her.”

We get to the station. I park at the cab stand.

He wipes his forehead. “Ten, right?”

He digs in his pocket and pulls out a gum-banded roll. He hands over a bill, half stained dark.

He looks at me. “Like, I wanted to be a man, wanted to provide. But I couldn’t.” He’s looking at me but he’s not talking to me. It’s like he’s staring behind me or through me or something.

Some Mexican in a Yellow Cab comes up behind me and hits the horn. The kid gets out and walks off. I shift to drive.

I put my passenger window down. He comes back. “Y’know what—here.” He undoes the gum-band and drops most of his roll into the empty seat. “You see Jasmin, tell her I’m sorry.”

He hears an announcement and staggers off quickly, bag hanging from his shoulder. The Mexican behind me lays on it again. “MY cab stand!”

I take off as fast as I can to get the hell away from him.

Later, heading back, I turn my radio on and think. “If you see Jasmin…” Please. Ain’t my business. Still, I end up feeling sorry for the kid. Nobody oughta be that troubled. I take my time going home. All that money; I won’t need to jitney for a while.

The reception on my radio’s bad, I keep hearing noise. I turn the dial around but it won’t stop. Halfway across the High Level bridge I glance at the rearview and see the dude left one of his bags.

I shut off the radio. The noise don’t go away. I turn right; there’s a Walgreens just off the bridge; I pull into the parking lot, jump out the car, look around, and open the back door. The bag’s half-zipped. I open it and step back. There it is—a boy, I believe. Maybe a month old. It’s not crying, just making small sounds. It looks at me and smiles.

A cop drives by slow, stopping at the light by the bridge. He turns his head towards me. The Walgreens is closed. Nobody else is around. There is a lot of dark money in my car. I hurry and close the door, crouch down and pretend to mess with my front tire. I stand, kick it, and get back in.

I start the car and head down 7th Ave. I hit a pothole. The baby starts crying. I pass the police station. My head hurts and I got no idea what to do. None. I just begin going around the block, trying to clear my head. I avoid potholes. The baby calms down. I look back and see the baby is sleeping. That makes me feel better. I keep thinking. Lord Jesus. All that money. The things folks do. The things they don’t. It’s crazy.

I drive in circles for a long time.