The Architecture of Thought: Lydia Davis on Proust 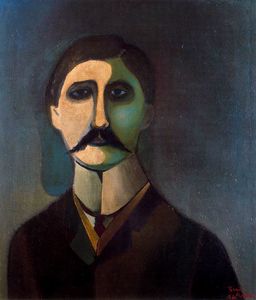 The apartment at 102 Boulevard Haussmann in which Proust wrote most of In Search of Lost Time is now owned by a bank. The bedroom in which Proust slept, rested, ate, received visitors, and wrote is used by the bank for meetings with clients. And it is relatively bare of reminders of Proust. There is a portrait of him on the wall and some of his books in a bookcase. The only other furniture is a table and four chairs and a sideboard. What is still there that Proust looked upon daily is the marble fireplace, the doors, the two tall windows, and the wood floor with its herringbone pattern. Sparsely furnished like this, it does not seem very large, though Proust described it as vast.

Sometimes, after he’d been awake a few hours, though still in bed, Proust would decide on impulse to go out and see a friend. At ten or eleven at night in a dark bedroom, the only light comes from the lamp by his bed, and the fire in the fireplace if it’s winter. The dark room is crowded with furniture, including two large bookcases, a wardrobe, a grand piano, an armchair for visitors, and various little tables. Proust leaves his bed, crosses the short hallway, and gets dressed. His suit is made to measure and his patent leather boots were bought at the Old England Shop. He does not tend to wear out his shoes. He is transported by taxi and walks on carpet and parquet floors.

He arrives at his friend’s house, waking him up, and begins talking. His friend, perhaps exaggerating, later reports that Proust speaks in one long sentence that does not come to an end until the middle of the night. This sentence is full of asides, parenthetical remarks, parentheses, dashes, illuminations, reconsiderations, revisions, addenda, corrections, augmentations, digressions, qualifications, erasures, deletions, and marginal notes. The sentence, in other words, attempts to be exhaustive, to capture every nuance of a piece of reality, and yet to be correct–to reflect Proust’s entire thought. To be exhaustive and correct is of course an infinite task. More can always be inserted, more event and more nuance, more commentary on the event, and more nuance within the commentary. Many contemporaries of Proust’s insisted that he wrote the way he spoke, although when Swann’s Way appeared in print, they were startled by what they saw as the severity of the page. Where were the pauses, the inflections; there were not enough empty spaces, not enough punctuation marks. “I can’t read it,” said one old father to his son. “You read it aloud to me.” The sentences did not seem as long when they were spoken as when they were read on the page. The voice punctuated. On the page, the punctuation is eccentric. Certain sentences are remarkable for their absence of commas, and others for having suddenly so many more commas than you would expect. The punctuation obeys some other law. Is this style conversational or not? Well, it seems to want to give the illusion of the conversational. Sentences begin with “and so,” “but,” “in fact,” “actually,” “and yet,” “of course,” “yes,” “no,” “wasn’t it true,” “really.” But what a strange conversation, long and one-sided, composed in darkness and silence. And sentences so elaborately constructed with towering architectures of subordinate phrases that you have to stop and think, and then go back over them, just to figure them out.

Proust felt that a long sentence contained a whole, complex thought. The shape of the sentence was the shape of the thought, and every word was necessary to the thought. When he used a deliberate effect like alliteration, it was there not as an empty flourish, but to tie two similar elements or contrasting elements together in one’s mind. He despised empty flourishes. He categorically rejected sentences that were artificially amplified, that were overly abstract or that groped, arriving at a sentence by a succession of approximations. Great length was not desirable in itself. As he proceeded from draft to draft, he not only added material but also condensed. “I prefer concentration,” he said, “even in length. I really have to weave these long silks as I spin them,” he said. “If I shortened my sentences, it would make little pieces of sentences, not sentences.”

“Please break up these long sentences” is the plaintive request that a translator of Proust hears at least once. No, the book is really more about thought than plot. And in any case, in Swann’s Way at least, there is a nice balance. Eighty percent of the sentences are not excessively long. The sentences must be kept intact, long and short, and they must retain as many elements of their complexity as possible, the parallel structures, the pairs of phrases, the triplets, the alliteration and assonance, the meter. But above all the intricate architecture of syntax by which Proust inserts his parenthetical remarks and digressions, delaying as long as possible the outcome of the sentence. So this means in the end trying to preserve not only the ease of a sentence when it is easy, but also the difficulty of a sentence when it is difficult, and it means asking oneself the same question with each sentence, though with a different problem in each: If I can’t produce, for example, the hexameter which Proust has so beautifully embedded in this phrase, by just how much will I have changed his thought?