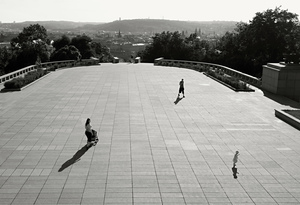 Stephan Delbos and Tereza Novická are the recipients of a 2015 Heim/PEN Translaion Fund Grant for their translation of The Absolute Gravedigger, a collection of poems by Vítězslav Nezval, a leading poet of Czech surrealism. Nezval’s poems not only highlight Prague as the twin capital of surrealism with Paris, but are also a dark and prescient avant-garde document of Europe in crisis. Read Delbos and Novická’s essay on translating The Absolute Gravedigger here.

The Absolute Gravedigger is forthcoming from Twisted Spoon Press.

Vítězslav Nezval (1900-1958) was perhaps the most prolific writer in Prague during the 1920s and ’30s. An original member of the avant-garde group of artists Devetsil (Nine Forces), he was a founding figure of the Poetist movement. His output consists of a number of poetry collections, experimental plays and novels, memoirs, essays, and translations. Nezval frequently traveled to Paris, engaging with the French surrealists. Forging a friendship with André Breton and Paul Eluard, he was instrumental in founding The Surrealist Group of Czechoslovakia in 1934.

Tereza Novická, a native of San Francisco, moved to the Czech Republic in 2000. Currently a student in the American Literature graduate program at Charles University in Prague, she also serves as assistant director for the annual Prague Microfestival. She has translated a number of Czech and Slovak poets into English, including Ondřej Buddeus, Jan Těsnohlídek, Sylva Fischerová, Lenka Daňhelová, Martin Skýpala, Vlado Šimek, and Pavel Novotný.

Stephan Delbos is a New England-born writer living in Prague, where he teaches at Charles University and Anglo-American University. His poetry, essays, and translations have been published internationally. He is the editor of From a Terrace in Prague: A Prague Poetry Anthology (Litteraria Pragensia, 2011). His collection of visual poems, “Bagatelles for Typewriter,” was exhibited at Prague’s ArtSpace Gallery in 2012. His play, Chetty’s Lullaby, about jazz trumpeter Chet Baker, was produced in San Francisco. He is a founding editor of B O D Y.