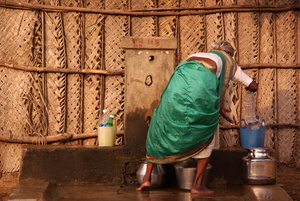 People called her Mangan’s ma, so it is understandable that her son’s name would be Mangan. But no one knew where Mangan was. No one had seen Mangan. In fact, it was not in anyone’s memory to recall that yes, there was a lad named Mangan who, while playing cricket in the neighbourhood, had broken someone’s window pane, that his catapult had wounded so-and-so’s forehead, that he once was so small that he had peed on such-and-such grandpa or granduncle, that when he grew up a little bit more, his vulnerable toddle had been watched with such fondness. Mangan was nowhere. Mangan was no one. There was just Mangan’s ma.

Mangan’s ma was very wrinkled, with a weird toothless mouth. She was so skeletal that she would have sensed danger even from a breeze. She mostly wore a long pink tunic and wide leg Shikarpur pyjamas. And with this, flip flops. She always covered her head with a dupatta. Thick framed soda-water spectacles sat on her face. Her so-called beard had three finger length grey strands that dangled, and two of these often coiled up to nestle against her chin.

Such a craze she had for cleanliness that it had become a habit for her to wash everything. She not only washed vessels and clothes, not just the floor and footwear, but every other day, the walls of the house, too. She would wash all the furniture. If her food was hot, she would eat, else, if the roti went cold, she would wash it, too, dipping it once in water and put it for drying under the fan and even before it dried, dunk it in dal and munch it off. She had not yet understood the technique of washing cooked vegetables, but coins, notes, framed-unframed pictures, all were washed before they could be used. Many times, Basar Mal had seen her washing even the switchboard. In her heedless doggedness to wipe the switches with a wet cloth, she had tasted one too many electric shocks. Because her hands constantly dabbled in water, the skin of her fingertips had eternally turned white.

Similar feelings she had for water, too. People said Mangan’s ma’s thirst was unquenchable. In those localities, water was supplied at a fixed time and people filled all the water required during that time; but Mangan’s ma could be seen anytime at the locality tap, at the hand pump, holding an old iron bucket or a plastic jerry can. At any time she could knock at your door and ask in Sindhi–Dis th putra, paani aayo aa chha? (Just see, son, has the water come?)

Hut, muaa Chandraa. Charayo. (Move, you dead cunning rascal. You crackpot.)  Mumbling thus, Mangan’s ma would return, but it is quite probable that the following day,

she could ask you the same question.

Today also, as always, Basar Mal explains that the water tank of the house is full, that they do not need any more water. But, her soundless gaze silences him and, she goes about depositing her jerry cans and water kegs carefully near the door.

On getting down from the autorickshaw, later on during the day, Basar Mal finds Mangan’s ma squatting at the hand pump. The jerry can is brimming. Mangan’s ma, exhausted from constant pushing of the pump’s handle, had wanted to rest for a couple of minutes before she could lug back her jerry can. He goes, stands near her. Mangan’s ma lifts her face, looks at him. She does not have any smile. After looking long at Basar Mal, she looks at the filled can just once. Then, placing her hands on her knees tries getting up. Basar Mal puts his stick in Mangan’s ma’s hands, picks up the jerry can and starts to walk ahead.

To Basar Mal Jetharam Purswani, she appears like an onion, whose outer skin is dry, nevertheless, with the peeling of every layer, reveals one more moist and soft skin. An onion that has deferred its peeling. Who has wrapped herself in some other skin to save the curlicue signs encoded inside the skin. Not a sound flows out from the numerous doors of the onion. Perhaps it is the captivity of the inside, to emerge from which she has forgotten the mantra of simsim. It is quite possible that Basar Mal himself has forgotten the chant of that mantra so requisite to enter inside.

He recalls a bygone afternoon when coming back on foot from the station, Mangan’s ma, who he called Jalo then, had demanded, stomping her feet–Enough! I can’t walk anymore. Carry me in your arms. In response, Basar Mal had simply peeped into Jalo’s eyes and Jalo had burst into a peal of delightful giggles. In the name of her laughter now, Basar Mal remembers that smiling-giggling face.

He remembers the night when after finishing dinner at home, they had impulsively wandered off and sucked endlessly on mango popsicles so that their lips stained yellow and their clothes, too, from the front, which they discovered in their merriment on returning home.

Basar Mal also remembers the night when Jalo had wailed aloud, hiccupping in his lap on the bed, and in frustration continually asked him–Why wouldn’t this Mangan arrive after all?

Eendo, Jalo, eendo. Mangan eendo hekado diyan. Chav Jhulelal. (He will arrive, Jalo, he will arrive. Mangan will arrive one day. Take the name of Jhulelal.)

For a long time then, both had remained silent drowning in themself. Jalo would at intervals place her hand on her belly. Raising her tunic, look at her belly. When would this Mangan arrive? Closing her eyes, she would write on Basar Mal’s palm. From next morning, Basar Mal started calling her not Jalo, but Mangan’s ma. Whenever he uttered ‘Mangan’s ma’, Jalo’s eyes would brighten, then fill, then go into a vacuosness and get stuck there. With each utterance, the sensation of Mangan’s being would deepen. The hope of his coming into this world would become verdant. Gradually, even the entire neighborhood started calling her Mangan’s ma.

Geet Chaturvedi is a Hindi poet, short story author, and novelist. Often regarded as an avant-garde, he was awarded the Bharat Bhushan Agrawal Award for poetry in 2007 and Krishna Pratap Award for Fiction in 2014. He is active both as a fiction writer and critic. He has been named one of the ‘Ten Best Writers’ of India by esteemed English daily The Indian Express and he is one of the most widely read contemporary Hindi poet. Chaturvedi is the author of two translations of Pablo Neruda and Charlie Chaplin, a book of poetry Aalaap mein girah, two collections of stories Savant Anti Ki Ladkiyan and Pink Slip Daddy, and Simsim. He currently lives in Bhopal, India.

Anita Gopalan is a translator and artist. She graduated in Computer Science and Mathematics from BITS Pilani, and worked in Banking Technology sector for over fourteen years in India, Australia, New Zealand, Singapore and the Middle East. She has translated prose and poetry by  contemporary Hindi author Geet Chaturvedi. Her work has appeared, or is forthcoming in, Poetry International Rotterdam, Modern Poetry in Translation, World Literature Today, Drunken Boat, Mantis, International Poetry Review, Circumference, and elsewhere. A trader, she now lives in Bangalore, India.