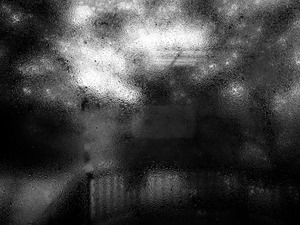 I was there the first time Ricky tried to escape. He would try again, and again, one hand at a time, but it was the first that set the pattern for all the rest. He almost missed me, coming up The Walk. I was just down from Hope, leaning against the chain-link fence in the shade, ignoring a group of Caininites nearby. Shane, Billy, Horse, others I didn’t know.

They stood just off The Walk, bleached out by the midday sun in their blue chambray shirts, their large crosses hanging from their necks on chains or by tooled strips of leather. All of a sort, that type.

Near off, sweaty shirtless men ran up and down a ragged court to the rhythm of arguments and harsh words, the metallic pinging of a cheap rubber ball. From the MPO all the way down to the farthest dorm, every gate to the East Yard was open. It was early still, hours till count.

“Ruler,” I said, to catch his attention.

I’d been waiting on a deal; Possum out the Paint Shop.

Ricky stopped to look at me, then looked away—staring out the gate on his right, down the steps at the Caininites gathered there. He stood like a small stone in the current of The Walk, forcing the flow of inmates coming and going to warp around him. If he stayed, he’d eventually be swept away. Brushed aside. He was too small, a slim five-foot-three white boy in glasses, his dark shock of hair.

He held his left hand in his right and I could see red between his fingers, red on his white t-shirt, blood darkening the front of his jeans. Blood or piss. I looked at his face, dazed—then back the way he’d come. Laverne stood there, Red Bird. Resting his shoulder against the walkway’s opposite fence. Watching.

First Ricky, then me. Our eyes met. I knew Laverne, by all his names, all his proclivities. He smiled. He rubbed a hand over his crotch and winked. They say inmates only respect three things: money, power, and pain—in that ascending order.

Blood splattered and plopped in a pool at his feet, coloring his white tennis shoes, soaking the laces like candy canes. I couldn’t see exactly where it came from. Where he was hurt.

Rick the Ruler, he was nothing of the sort; it’s an irony, like that hulking nigga over on the Wild Side called Tiny. A joke.

He waited and when I couldn’t answer, he turned and left The Walk—out through the gate and down onto the Yard, into the sun. The Caininites at the bottom of the steps refused to move but he pushed through.

“There is safety,” Shane said. “For all who come.” That brought laughter.

Someone grabbed Rick’s shoulder, another stroked his hair.

On The Walk, Laverne remained where he was, just casually passing time now. He’d given up the chase. I left him there, pushing off to step across the walkway and follow out the gate. The heat was immediate on my skin.

I hopped down the steps. “Fuck you,” I told Shane, shoving past. “Oh my,” someone laughed. “So much for brotherly love.”

“Got it right here for you,” I said. “Run along after your bitch.”

All these white boys. This wasn’t my place. Ricky was yards ahead, not waiting.

Out from under The Walk, the sky was a dome of faded robins-egg-blue in the squinting light, the dry grass crunching underfoot. Far ahead was the double perimeter, two rows of hurricane fencing separated by white gravel running along in parallel 10 feet apart. Each topped with razor wire, rolls of concertina stacked three high against their base.

Ricky skirted the basketball court and clanking iron pile, then along Hope dorm elevated on its four-foot concrete stilts.

But I could follow him, a drop here, a drop there. Trailing him as he struck out across the vastness of the East Yard. The Yard stretched away to our right and left for nearly a quarter-mile following The Walk. Ahead, towers rose up outside the perimeter like gunmetal monoliths, their windows reflecting silver.

“Rick! Fuck.” I didn’t try to catch up, walking fast with a half-ounce keistered in your ass is uncomfortable.

The smell of the Mississippi was strong off to the west. Sometimes you can almost feel the river in your bones, deep and sluggish like thick blood. A low thrumming of power even in the still laziness of high summer. A strange mixture of dust and humidity, of baked grass and peaty fecundity. The locust’s Kreeee and mosquitoes’ hum.

At night, you can lay alone in your rack—or with another, and envision it passing, pulling everything along slow and inexorable like the movement of Time. You can relax and let it slowly pull you under in days and weeks and years. Close your eyes and drown in it, like the pull of a lover.

To let go. Seeking to fill the emptiness of that hole called the soul; the dilemma found betwixt one’s internal and external confinement. You can try, to forget.

But no, it will never work. Such consolation.

Ahead, Ricky stumbled, maybe from blood loss, or the heat. He stopped and I stopped. I watched him bend over and retch out onto the grass. I could see his sides heave, see him spit and wipe his mouth with the back of his hand. He rose, arching his back to stare up into the sky. It was his left hand that bled. It dangled by his side; his right fist closed.

“I want to be free,” he said. He half turned to me. There was blood smeared across his mouth and chin from where he’d wiped his face.

I smiled. “Tell me something, man.” What did he expect?

We were close, near the 10-yard No-Go line running along the perimeter. A line like those on sporting fields, white chalk and lime laid down weekly by a trustee with a tractor.

Signs on the inner fence read: “Stay behind the White Line.” No Man’s Land.

“Ricky …” There was a line between us, one just as sharp. “You don’t belong to anyone,” I said. Stupid. Meaningless words.

Others read: “This Is Your Warning Shot.” “I belong to everyone,” he said.

But there’d been no warning shot the first time he came to me. Closing my eyes, I’d just let it happen. Pretending I was elsewhere, with a girl I once knew, until I couldn’t anymore, sliding my fingers in his short hair to urge him on. Giving in.

He sobbed. “With you, it would stop.”

No, it wouldn’t. I’d have to kill a few of them first. They’d told me as much. How it had to end. How couldn’t it? Which of the chthonic gods would you pray to while sharpening a piece of iron on a concrete floor in the name of love? Would you even?

Over top us, Guard Tower 5 rose 30 feet, its windows swung open. I could just see Sgt. Davis inside, her black face in the shadows; not a threat yet, but curious. I could hear her radio playing gospel, she’d probably be humming. She sings sometimes, you might hear her early in the morning when you jogged by. She’d tap her glass, “Hello.” Now she was only watching.

He reached his right arm out to me, his fist opened palm up. Sitting there in the flat brightness was a finger, severed from the third knuckle. He held his left hand out by his side, looking away—the gap between its thumb and middle finger red and enormous.

He even cried like a girl, red-faced and full of emotion. Ugly. It made me angry.

“I never needed love,” he said. He eyed me. Above, Sgt. Davis clicked off her radio and he flinched. “Just protection. That’s all.”

But he shook his head. “Not enough.” And he shifted, so I knew what was coming. Could read it on his face, what he was thinking.

“Why? Why now? What’s different?” he sobbed.

When first they came, I’d tried to be hard, to stand my ground, but to lay such a claim—against so many. What price to pay? Knowing all along they’d take him and pass him around. Wrong, they were wrong, but what price to pay to be right? To be willing to pay to hold on?

Standing there now, the look on his face when I still couldn’t answer. “I’m sorry,” I said. “I am.”

And I reached out to him, to stop and pull him back, but he stepped away from me and lurching, he was gone. Turning and wobbling towards the fence line.

I heard Sgt. Davis above, heard her say, “Don’t.” Heard the sudden scrape of movement in the silence—a chair, the scratch of metal and metal rattle, a walkie-talkie’s squirk.

I looked up and shouted, I don’t know whether for him or to her, but what did it matter? It was already too late. Rick the Ruler. Too far gone. He’d gone and crossed the line into No Man’s Land even before I’d met him out on The Walk; crossed it for good the moment he’d started cutting things off.

I could never forget, let go. Will never no matter how hard I try. My shame, to have just stood aside to watch him slowly fly up and over once, twice, thrice…time and again. Working first across one hand before the other, as the days and weeks wore on. Swinging his arm to sling himself bit by bloody bit up and over a piece at a time.

Up and over the fences and all they signified. Up over their signs. Up and over the red rusted points of their spiraling razor’s wire before a rifle barrel could ever crack.

I take my time, sharpening a piece of rusty steel against the cellblock’s rough concrete floor.

Soon, dawn. I know where Laverne, Redbird, Shane, and Horse are. Where to find them all. Too little, too late now, yes. But enough?

He’d never climb his way out of prison but try instead to throw himself to freedom a bit at a time. Each loss, each gap cut loose leaving just that little less for us. To be taken, to be used.

Until bit by bit and piece by piece, I always prayed the day would come when the last of him finally made it.

Slowly coming apart in Time, till nothing was left behind.

PEN America celebrates the winners of the 2016 Prison Writing Contest with a live event, PEN Breakout: Voices from the Inside on Nov. 28 at The Green Space in New York City.