Selfie in a Pixelated Mirror 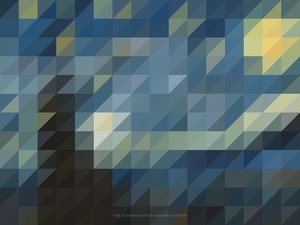 This week in the PEN Poetry Series, PEN America features a poem by John Beer.

Selfie in a Pixelated Mirror

The technology meant to link us together
remains in beta: there might be some glitches
in these early stages. I’m not like some painter
who secretly worked out a camera obscura
to project the hardest parts to copy,
using a concave mirror to focus details
of landscapes or sovereigns sitting for a portrait.
This isn’t proto-cinema. Neither am I asking you to grip
the handles of some kind of measurement device,
gauging electric potential to see what turns you on.
I’m not trying to clear either of us, detect
lies or hidden trauma, unfold a cataclysmic
cosmic history. Not too many jokes, and even worse,
the ones that do come up won’t be so funny, more like
saltines, welcome when there’s nothing else around.
When it’s over, you won’t be any richer.
The English language will endure this poem.
Enough with the disclaimers. Click.

But already they’re back. I told you
this was glitchy. In the first version,
I started out a little more confessional,
beginning with the lines, “My ex-wife told me
if anyone was going to play my life/ it would be
Philip Seymour Hoffman.” Pretty egocentric.
I go on, of course, to trace the tragic contours
of that great one’s career. The overcoat he wore
in State and Main. Hitting his head against
the steering column. His agitated take
on Lester Bangs. Lots of other things, but above all,
the Vermeer lighting when he first appeared
seducing Joaquin Phoenix in The Master.
I spent a dozen lines or so dissecting
the way you couldn’t see his eyes
until the right one emerges at the mention
of Phoenix’s mystical elixir. “This is great stuff,”
an early reader swore to me, but that’s
the kind of comment at my more midlife stage
I’ve grown to get suspicious of. I threw it out.
Scratched up the notebook page. To tell the truth,
I was gung-ho on never mentioning it.
Let’s call that mistake number two. Click.

And I know it’s hard to begin again.
You start to consider the lies you’ve already heard,
“whether personally or on a much larger scale.”
You might find yourself wanting to disappear
into a fantasy of Innerlichkeit, a modern-day Novalis
dreaming of something small that could focus
your attention, a blue peg or unfamiliar term
exchanged by a couple of bicyclists
leaving the newest bakery, but soon enough
you’re scrolling through Instagram,
and the fact is my friends, the ones I follow,
most of whom seem to be following me,
have by and large an above average visual sense,
so it’s a stream of charming vistas, shadows
cast by glassware, little animals, oh I should
recognize that writer. The very thought that I
might not be utterly dispersed, permanently
like Osiris, seems as Seventies as Nixon masks
or a certain ruminative poetic mode. Click.

“The white of the wall,” I wrote down
in my notebook. A long time ago. Hard to say
what makes for a good beginning, what
it promises. You start out by considering,
I suppose, the particular timbre of the voice.
Or probably that’s bullshit. Glitch, glitch,
glitch. Others suggest I ought to hire
an assistant, someone thin and lovelorn.
A day or two later, I’m staring out at the sea.
It’s a familiar way of calling up
the sense of a deeper connection, only now
it’s filled with plastic and acidic.
The dream out of phase with its reality.
And so the idea of a continual recording,
continual and yet discrete, checking in,
starts to capture our collective imagination.
We’re not alone. I mean that someone’s
listening. Even if it’s the NSA,
that doesn’t necessarily imply it’s not
a worthy substitute for what the ghost world
meant to me. Or, wait, it does.

But have you got a better option? One road
leads to the technological, the other the screen
of artistry, and as far as I can see, neither one
has anything much to do with making your way
through a dark wood, getting down to business,
the business of living. All afternoon
you felt unusually hot. I’ve been out there
collecting likes, finding fun videos,
playing what I thought could be an informative
role, but lately when I google myself
I just get complaints about my failure
to self-monetize, or even worse, radio
silence: a series of digits extending
to infinity. So I embarked upon a new
set of experiments, the American way,
shopping in the style of the 50s,
spending a week of afternoons
in an isolation chamber. I think I emerged
with a surprisingly healthy glow. Click.

It was at the peak of this recent malaise,
though I suppose “the screen of artistry” requires
a less contradictory formulation, anyway,
the consensus seemed to be hardening
against my plan to make each section
of the gradually gathering poem a Brillo box,
or its functional equivalent, an Amazon
Dash button. Just because everything’s
been done before, in one fashion or another,
doesn’t always mean the best way forward
is rooting around in historical detritus,
a Mad magazine without a cover, a voice
you almost thought you’d never hear again.
On the other hand, it’s practically axiomatic
that the sins of yesteryear get visited, sooner
or later, upon every fresh-faced practitioner
regardless how extricated they might
consider themselves. The image isn’t
exhausted by its metadata, or, as they say,
the hand that snaps the selfie remains
the blind spot of the picture. Click.

One filter brings the unmistakable flaw
into view; another buries it
under a cool layer of blue. Likewise,
the writer, approaching his forties
with little left to show for it but eight dozen
pulp publications, a litter of check stubs,
falls in with a rocket scientist
and his surprisingly seductive companion.
The key turns out to be: read every word
until you feel you understand it. You start
to realize you’re confused. You don’t know
your way about, even though you started
only that morning. Go back to the last point
you felt you knew what you were doing,
and look for the word you don’t yet understand.
Look it up. See how other people use it.
The more you develop habits of reflection,
methods of documenting the impact
of this hard world upon your little carapace,
the easier it gets to navigate whatever depths
suddenly swell up from out of the past. Click.

Meanwhile the text has simply dissolved
into an abiding swirl of dots. Everybody
feels patient, but they feel their limits, too.
What I said demanded a response. But don’t
expect one from “traditional institutions,
which refuse any responsibility for you
but still try to control and micromanage
your life.” That’s Hito Steyerl, in preparation
for a dazzling take on George Michael’s
“Freedom ’90,” the video for which features,
as Steyerl puts it, “supermodels who lip-sync
his songs as though they were human mics.”
Or human mirrors, I almost wanted to copy,
and might have, if this piece itself
were a little less clear about the boundary
between transcription and interpretation,
about what I lay claim to and what’s merely
happening quietly now to both of us.
I didn’t even try to line up any supermodels,
and nevertheless the lines are slipping
into something less like meditation
than a vigilant, untiring surveillance. Click.

Not that I’m unafraid to share my funding
sources. Would you like a Diet Coke? Is it time
to reorder those disposable diapers, the ones
you recently purchased from Huggies?
While you’ve been sitting there reading this,
more data has been generated and shared
than in the literate history of the planet
up to 1946, the year that introduced
a generation whose concerns would come
to percolate throughout a heretofore
rather sleepy, not to say reactionary, landscape.
Post-liberation, we can kick back,
enjoy the fruits of the Cold War without all
the antagonism, like learning a new language
while you shower. It’s not the worst.
“Don’t judge a book by its cover: this
applies to people on so many levels,”
MG posted today, and thanks to his privacy
settings, I can quote it right now.
He’s right, you know. As soon as you figure out
what it seems to be, it’s on its way
to being something else. Or maybe not.

Maybe, that is, we’d be better off
stepping outside for a minute or two
away from all the “screens of artistry,”
albeit shadowed now and then by intimations
of personal drones and the deliveries
they harbinger. Who wouldn’t want
to celebrate, in poem form no less,
the advent of spring in the Northwest,
this gorgeous, drying spring, this season
of cruel plans abruptly abandoned,
this patch of dust, these aquifers
depleted, this smoke on the horizon,
this grape starting to sweeten
in the desiccated air, this coming quiet,
this field depopulated, this stone,
this advent of the final advent, this
fresh day? This is me looking at you.
This is me before what happens. Click.

Dr. Sanjay Gupta, CNN’s chief medical
correspondent, said that as addicts
take mixtures of drugs more chronically,
they may not necessarily feel
the effect of the narcotics, which still
suppress the respiratory system. “They’re
not feeling it, but it’s still having
an impact on their ability to breathe,
and that’s the real problem,” he said.
“It’s called stacking. You can stack
the same drug too close together, or
you can stack other drugs, one
on top of the other. That’s how people
get into trouble. They do call it
accidental death as well.” Hoffman
was mourned in New York February 7
in a star-studded private funeral
attended by family and close friends.

There’s still room for a bullet in the chamber,
still the “only a dream” syndrome pops up
to haunt the slow unraveling that folks like us
tend to mistake for endings. So much
gets left out or occluded by necessity:
the extended episode involving nudity
and Guy Fawkes masks might still turn up
on BitTorrent or some weird outpost
of the dark net. Better, more hot-headed
poets than me will say that only nothing poetry
makes nothing happen, and maybe that’s
an argument against nothing poetry,
if that’s even really a thing. The image
I remember best was just a rectangle
of sunlight on the fading carpet.
“Sometimes the clothes do not make
the man,” the song was telling us.
You’ve gotta give for what you take.
We each stood in line and waited,
surrounded by our very own empty day.