Russia: Attack on Journalists Must be Investigated 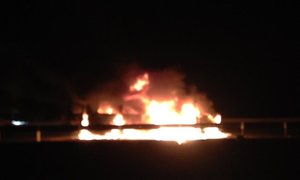 Yesterday’s vicious attack on a minibus of six journalists and two local activists traveling to Chechnya to investigate reports of torture and murder is a disturbing sign of the lack of freedom of expression in the north Caucasus region, PEN International, PEN Norway, Russian PEN and PEN Sweden said today. The organizations called for an immediate, thorough, and impartial investigation into the attack, and for anyone found responsible for the crime to be brought to justice.

Salil Tripathi, Chair of PEN International’s Writers in Prison Committee, said: “Russia has a long record of unexplained attacks against and killing of journalists. Continued, sustained public vilification of journalists and rights activists by senior officials in the Russian government is a major reason for such attacks; such vilification makes journalists and activists fair game to anyone who seeks to silence them. It is high time for Russian authorities to not only publicly condemn threats against journalists, but also to do everything in their power to bring to justice all those responsible for such attacks.”

The attack took place in Ingushetia close to the border with Chechnya after the journalists had reportedly visited Beslan in North Ossetia, on a day trip organized by the Committee Against Torture in Russia, one of the few human rights organizations still operating in the region. The minibus was reportedly followed by a car with Chechen number plates for most of the day, before being forced to stop and attacked by up to 20 masked men with clubs and sharp implements. They attackers also set fire to the vehicle.

All six journalists – Alexandrina Elagina, from the independent Russian-language magazine The New Times, Egor Skovoroda, a reporter for the independent news website MediaZona, Anton Prusakov, a journalist at the Moscow-based business daily Kommersant; Mikhail Solunin, a Russian blogger; and two foreign journalists: Øystein Windstad, a reporter for the Norwegian monthly Ny Tid and Maria Persson Löfgren, from the Swedish public broadcaster Sveriges Radio – and the two activists Ivan Zhiltsov and Ekaterina Vanslova were injured, along with the minibus driver. Three required hospitalization.