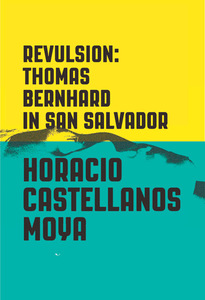 Horacio Castellanos Moya is an El Salvadoran writer and journalist who has worked as the editor of news agencies, magazines, and newspapers in various countries. As a fiction writer, he was granted residencies in a program supported by the Frankfurt International Book Fair and in the City of Asylum program in Pittsburgh. He has published ten novels, five short story collections, and a book of essays. Currently he teaches creative writing and media in the Department of Spanish and Portuguese at the University of Iowa.

Lee Klein’s fiction, essays, reviews, and translations have appeared in Harper’s, The Best American Nonrequired Reading 2007, and many other sites, journals, and anthologies. A graduate of the Iowa Writers’ Workshop, he is also the author of The Shimmering Go-Between, Thanks and Sorry and Good Luck: Rejection Letters from the Eyeshot Outbox, and Incidents of Egotourism in the Temporary World. He lives in South Philadelphia.

Revulsion: Thomas Bernhard in San Salvador is forthcoming from New Directions in July 2016.

“I think the message of PEN America is so urgent on college campuses today and in our world... it was an amazing turnout to see so many people from across the entire campus come together...”