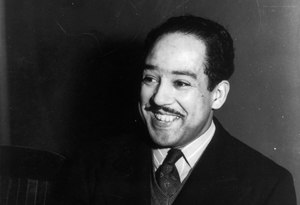 In “The Negro Artist and the Racial Mountain,” Langston Hughes’s famous essay of 1926, Hughes describes his disappointment with a statement made by “one of the most promising of the young Negro poets.” Although we know Countee Cullen, one of the most promising young black poets of the Harlem Renaissance, made such statements openly and often, Hughes obscures the identity of his young poet mainly because it is polite to do so, but also because Hughes finds so damaging the young man’s admission that “[he wants] to be a poet—not a Negro poet.” Tracing the emotional logic of this statement, Hughes surmises the truth at its core: that the young poet “would like to be white.” This is what Hughes calls the racial mountain “standing in the way of any true Negro art in America—this urge within the race toward whiteness.” While for Hughes what compels this urge is racial self-hatred, he acknowledges the compounding force of “American standardization,” or assimilation. According to Hughes, these two currents conspire to stifle the unique cultural expressions of African American writers and artists. But by mapping out the force and depth of these currents, Hughes reveals the body of thought containing them: the premise of his age: that racial groups are endowed by Nature with discrete and essential racial identities.

I take issue with Hughes’s conclusion that the nameless young poet’s impatience with the performance of race necessarily equals a desire to be white. Indeed, we might read the young poet’s assertion in the way we read Zora Neal Hurston’s descriptions of how she became racially self-consciousness only after, at age thirteen, her first experience outside the all black town of Eatonville, Florida where she grew up. Hurston writes in “How It Feels to Be Colored Me,” her 1928 essay, it was when she arrived in Jacksonville for school that she could no longer fully recognize herself as an individual in the eyes of the world, and had become “a little colored girl.” Here we see embracing the label is not always an act of self-empowerment. Here it rather obscures her identity and seeks to qualify her expressions and modes of behavior in relation to rigid racial norms. To embrace it would be to embrace a figment in someone else’s imagination, which would undermine her artistic ambitions. Hurston’s account demonstrates that the desire to transcend racial categorization may reveal a desire to regain innocence, a desire to practice one’s craft free from the recriminating awareness of, at best, a climate of critical animosity, or, at worst, presumptions of inferiority. It need not mean one wants to be white.

Much of Hughes’s argument rests on his claim that the lower socioeconomic classes of the black community are more in touch with their essential nature than are more educated and financially secure African Americans. This, too, is a common theme for his time: that distance from labor weakens the power of the racial imagination. And we can read this today for the urban pastoralism it conveys. When Hughes celebrates “the eternal tom-tom beating in the Negro soul,” it is difficult for the reader to hide a twinge of embarrassment for such an expression we would otherwise find offensive today. And when Hughes denigrates “the closed ears of the colored near intellectuals,” and “the smug Negro middle class,” we begin to see that his racial mountain is heaped upon a landfill of class resentment.

Hughes’s claims of being secure in his racial self-image are ultimately a whistling in the dark. He is shamed by the young poet’s desire to be free of the stereotypical expectations of race precisely because he is self-conscious about his own growing alienation from the working class—due to his education and rising literary star. The young poet’s statement shames Hughes also because, sensitive to symptoms of self-hatred, Hughes is quick to diagnose it in others—rather preemptively—as a means of inoculating himself against this ever-present threat. Most importantly, Hughes has a motive for touting racial essentialism. His artistic ambition depends on it. By rejecting the merits of writing within a unified notion of blackness, the young poet challenges the rhetorical foundation of Hughes’s agenda, which is to lend his own work the imprimatur of authentic racial expression.

African American writers have alternately condemned race—the cultural practice of it—and idealized it, theorized and dismissed it. At times, race has distorted our thinking and at times clarified it. We have turned it into soapboxes; we’ve used it as a lampshade to place on our heads at annual gatherings. For Hughes, the racial paradigm is a drop cloth over the self-portrait in the parlor. For Hurston, it is a bell she can’t unring. Race might not manifest as some immovable feature of the landscape for the young poet of Hughes’s essay. Perhaps the young poet imagines race as a kind of street noise, and simply wishes he could get up from his desk, cross the room and close the window. The chief obstacle, if there be any, among ambitious African American writers, and writers of color generally, may indeed be an excessive desire for the privileges of majority cultural status. There are some writers of color today who may even wish to be white. The extent to which we employ race as a theme in our work, however, is the extent to which it will mock the tidiness of any uniform appraisal. The real racial mountain, then, just might be our reluctance to discuss openly what are the implications of our ambitions, what these portend for the ideology of race altogether.

Pulitzer Prize-winner @ayadakhtar has been named the next president of @PENamerica.

Are you an artist under threat? @AtRiskArtists is connected to a global network of over 800 organizations and resources that can help. Contact us: http://bit.ly/ARConnect
#ArtIsNotACrime

PEN America calls on Taylor University to reinstate a professor who was dismissed after posting a video on YouTube. https://bit.ly/3bKbGkR