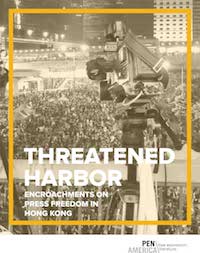 The deterioration of press freedom has accelerated over the past year in Hong Kong, coinciding with a period of rising political tension. Threatened Harbor: Encroachments on Press Freedom in Hong Kong brings together news reports, first-person commentary, and legal precedent to expose the shrinking environment for free expression in the territory as it marks more than 17 years under mainland Chinese control.

Local and foreign correspondents have long made use of Hong Kong’s unique geopolitical position and strong protections for freedom of expression to report on news from across Asia, free from the harsh constraints and censorship that stifle the press in mainland China. But according to PEN’s report, Hong Kong’s position as a media hub and harbor for press freedom is increasingly insecure. The report documents targeted economic pressures on pro-democracy newspapers and broadcast stations, staff reshufflings at major news organizations that have been interpreted as efforts to silence critical voices, cyber attacks against online media, and unresolved cases of physical violence against journalists.