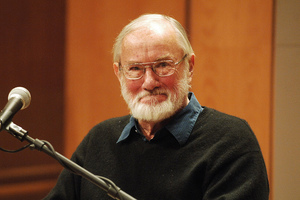 On behalf of PEN American Center and PEN’s members and supporters, we mourn the loss and celebrate the life and work of novelist Robert Stone. He passed away on Saturday at the age of 77 in his home in Key West, Florida. The cause was chronic obstructive pulmonary disease.

A staunch supporter of freedom of expression, Stone served on PEN’s board of trustees for over a decade, several of those years as vice president.

Stone is best known for his ambitious and politically engaged novels set during the Vietnam era. A lifelong adventurer, he joined the navy for four years and spent time as a Vietnam War correspondent. In the 1960s, he befriended writer Ken Kesey and Neal Cassady, whose group of friends the Merry Pranksters rose to notoriety in Tom Wolfe’s “The Electric Kool-Aid Acid Test.”

The author of eight novels, two short story collections, and the memoir: Prime Green: Remembering the Sixties, Stone garnered many awards for his books. Dog Soldiers, a tale set in Vietnam and California about a journalist caught up in smuggling heroin, won the National Book Award in 1975. His third novel A Flag for Sunrise, about a small Central American nation on the eve of revolution, was a finalist for the Pulitzer Prize, the PEN/Faulkner Award, and the National Book Award. His first novel A Hall of Mirrors is set in New Orleans in 1962, and depicts a political scene rife with right-wing racism. It won a William Faulkner Foundation Award for best first novel.

“There has always been a strain of American fiction that seems to grow directly from Melville and Conrad,“ wrote novelist Mona Simpson in The New York Times Book Review. “The foremost voice of this sensibility in our time is Robert Stone.”

Read his full obituary in the The New York Times.