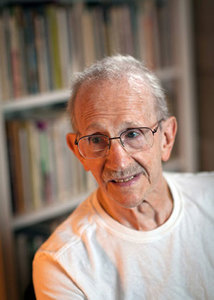 PEN mourns the passing of PEN member and former U.S. Poet Laureate Philip Levine, whose portraits of blue-collar life in the United States were grounded in his experiences of growing up in working-class Detroit and a deep political conscience. Levine passed away on Saturday from pancreatic cancer in his home in Fresco, California, at the age of 87.

Born to Russian Jewish immigrants in Detroit, Levine started working in auto factories from the age of fourteen, and went on to hold a series of industrial jobs at a soap factory, a bottling plant, and at Detroit Transmission. “I saw that the people that I was working with … were voiceless in a way,” he later explained to Detroit Magazine. “In terms of the literature of the United States they weren’t being heard. Nobody was speaking for them. And as young people will, you know, I took this foolish vow that I would speak for them and that’s what my life would be.”

The first member of his family to earn a college degree, Levine graduated from Wayne State University with bachelor’s and master’s degrees in English. In 1953 he began attending writing workshops at the University of Iowa as an unregistered student, eventually completing his degree in 1957. (As a teacher, Levin would later allow unregistered students to sit in on his classes.) John Berryman was his mentor.

After completing a Jones Fellowship at Stanford, he taught at the California State University, Fresno, where he remained until 1992. Levine also taught at Columbia, Tufts, Princeton, NYU, Brown, and the University of California at Berkeley.

According to Edward Hirsch, Levine was “a large, ironic Whitman of the industrial heartland.” One of the nation’s most decorated poets, Levine would go on to win the National Book Awards for What Work Is and Ashes, and the Pulitzer Prize for The Simple Truth. His other honors included the Ruth Lilly Poetry Prize for lifetime achievement and a National Book Critics Circle Award. He was appointed US Poet Laureate in 2011 and 2012.

Although Levine insisted he was “not a man of action,” instead, “a contemplative person who goes in a corner and writes,” he used his poetry as a vehicle for social criticism. He was an opponent of the Vietnam War and a defender of civil rights and the rights of working people. He also spent several of his adult years living in Franco’s Spain, where he developed a deep bond with those who had fought in the Spanish Civil War against the fascist dictator. He also helped to translate works by the Spanish poets Gloria Fuertes and James Sabines.

Of his early interest in poetry, which developed while he was working in Detroit’s factories, Levine recalls: “I was going to write the poetry of these people because they weren’t going to do it. And it was very funny, when my fellow workers would say, you know, ‘What do you do?’ and I would say, ‘I write poetry,’ nobody laughed at me.”

Read the full obituary in the The New York Times and The Guardian.