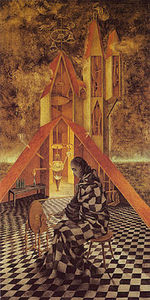 This piece was submitted by Margaret Carson as part of the 2015 PEN World Voices Online Anthology.

The Spanish Surrealist artist Remedios Varo (1908–1963) spent most of her adult life in exile. In 1937, during the Spanish Civil War, she moved from Barcelona to Paris with her partner, the French poet Benjamin Péret, and became closely associated with the Surrealist Movement. Four years later, following the outbreak of World War II, Varo and Péret fled Vichy France for Mexico, where they had been offered asylum. Péret returned to France in 1947, but Varo remained in Mexico City, part of a lively community of European expatriate artists, among them the British Surrealist Leonora Carrington and the Hungarian photographer Kati Horna, with whom Varo found a close artistic and spiritual affinity.

Varo was fascinated by magic, alchemy, the mystical writings of Gurdjieff, the I Ching. Her luminous, meticulously detailed paintings depict towers, honeycomb-like buildings, chambers in which walls peel away and upholstered chairs split open to reveal ghostly images, and salons with vaulted ceilings in which solitary figures receive peculiar and often unsettling visitors.

In translating this extract from Varo’s dream journal and other writings, I had the pleasure of lingering over her words in much the same way as I did over her images in a rare traveling exhibition of her paintings over a decade ago in Washington, D.C. It’s hard to know how her writing informed her art, but these vignette-like dreams are infused with many of her characteristic motifs. —Magaret Carson

We’re in the house of the Bal y Gays family (the house is quite different from the one they really live in). Jesús has summoned us to see if he could clear up the origin of a postcard containing a few sentences that slandered him, one sentence above all (I can’t recall it). It’s a postcard, the “poison pen” type, threatening. Walter and I, Manuel, Gerardo, Mario Stern, and a few others I don’t remember have come to this meeting.

Walter tells me that Mario Stern’s mother will arrive later, but I don’t see her. I feel rather tired and decide to lie down on one of the two beds in the living room. Before I lie down, I notice a strange rug on the floor that covers the entire room. It’s of a chickpea color and is made of small rectangles held together so that they’re not all flat, rather, some of them stick out more than others. I’m aware that it’s something Rosita has made. Before I lie down, I roll my hair up in those plastic curlers used in beauty salons. I lie down and see Rosita lying down in the other bed. Then I say to her, “Rosita, do you mind if I use this bed? I promise you, I’m absolutely clean. I took a bath only half an hour ago, and besides, the tests that were just done all show I’m in good health.” Rosita tells me she doesn’t care if I use the bed. The matter about the postcard has to be discussed with Jesús at twelve midnight, and until that hour arrives, everyone mills around, moving from one side of the room to the other.

I look out the window and am disgusted to see the mailman quickly crossing the street, dressed in my fine worsted beige shirt (it’s an English shirt, a gift from Eva). The shirt is tucked in at the waist by a Michoacán-style belt made of blue wool (which doesn’t in truth exist), also mine. I’m outraged and, heart racing, go out in search of the mailman in order to get my clothes back. But I can’t find him and I see an old suitcase (a gray suitcase I brought to Mexico when I came). I understand that that’s where my shirt must be and I start taking out a few clothes. I discover, along with my things, a suit of fine fabric belonging to my good friend Bill. I decide to keep this suit until he can come to retrieve it and I hang it on the back of a chair so that it doesn’t get wrinkled, but I notice that the right sleeve is turned inside out and rolled up. I mean, it’s folded several times in order to shorten it and it’s as if it had been used this way, inside out, while the other sleeve was used normally. This seems a physical impossibility to me and I’m left perplexed.

I was dreaming that I was asleep in my bedroom and a loud noise woke me up. The noise came from upstairs, from the studio, and it sounded as if a chair were being dragged. I thought it meant someone was trying to get in from the terrace and was pushing the chair that was against the door. I was frightened and it seemed prudent to let whoever it was know I was awake, but to do so without him realizing I knew he was there, so that he’d leave before something worse happened. I got up and from the door to my bedroom called upstairs to my cat, asking, “What’s all that commotion, Gordi?” I took another step forward and at that very moment, in utmost horror, I felt something behind me, or rather, something that was coming out of my own self. I realized at once that the alarming sound hadn’t come from upstairs; although I had wanted this threat to be outside and above, it was, in truth, always next to me or inside me. This “thing” behind me terrified me and induced a heavy, anguished sleep from which I struggled to waken completely in order to defend myself, but the mysterious creature grabbed me firmly by the nape of my neck, pressing his fingers as if he were trying to join the two long, thin muscles there (or muscles I believed were there) and with his other hand he squeezed the space between my eyes.  At the same time he said, “That’s to keep you from waking up, I don’t want you to wake up. I need you to sleep deeply in order for me to do what I have to do.” He didn’t harm me and I felt no pain, but the terror I felt was much worse than anything else and I didn’t want to fall asleep. “He” gave me one last squeeze, his strongest, and as I felt myself slipping into a deep sleep, I actually woke up, in profound anguish and drenched in sweat.

I had discovered an extremely important secret, something dealing more or less with the “absolute truth.” I don’t know how, but powerful people and government authorities discovered that I knew this secret, and they thought it extremely dangerous for society, because if it were known by the entire world, the existing social structure would collapse. So they captured me and sentenced me to death. The executioner led me to a place that seemed like the wall of a city. From each side of the wall there descended a very steep dirt slope.

The executioner seemed quite pleased. I was fearful and in deep anguish. When I saw he was about to behead me, I began to cry and begged him not to kill me because I was too young to die and he should think about the many years of life still ahead of me. Then the executioner began to laugh and made fun of me. He said, “Why are you afraid of death if you know so much? With so much knowledge, you shouldn’t fear death.” Then I suddenly realized that what he said was true, and that I wasn’t as much horrified by death as I was by having forgotten to do something of utmost importance before dying. I begged him to give me a few more moments of life so that I could do something that would allow me to die in peace. I explained that I loved someone and needed to weave his “destinies” with mine, and as soon as this weaving was made, we would remain joined for all eternity. The executioner seemed to find my plea quite reasonable and granted me ten more minutes to live. So I quickly proceeded to weave around me (much as baskets and hampers are woven) a sort of cage in the shape of an enormous egg (four to five times larger than me). The materials I used to weave it were like ribbons that materialized in my hands and, without seeing where they came from, I knew they were his substance and mine. When I finished weaving that egg-like thing, I was calm, but I kept crying. Then I told the executioner that now he could kill me, because the man I loved was woven together with me for all eternity.

This piece is excerpted from Remedios Varo: Letters, Dreams and Other Writings, translated from the Spanish by Margaret Carson, to be published by Wakefield Press (2016).