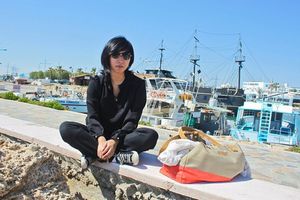 Adriana X. Jacobs is the recipient of a 2015 PEN/Heim Translation Fund Grant for her translation of The Truffle Eye by Vaan Nguyen, born in Israel to Vietnamese refugees. Read an excerpt of the translation here.

I first encountered Vaan Nguyen’s poetry online, specifically the poem “Mekong River,” which opened her 2013 full-length collection The Truffle Eye (a chapbook version appeared in 2008). Nguyen is the daughter of refugees of the Vietnam War who were granted asylum, and later citizenship, in the late 1970s by Israel’s then Prime Minister Menachem Begin. The connection between “Mekong River” and Nguyen’s cultural background is evident, but the rest of the poem plays with and even challenges this relation, and it was this quality of her work that drew me in as a reader and, almost simultaneously, as a translator.

There is no question that Nguyen’s Vietnamese-Israeli identity has brought attention to her work, but for a literary culture that takes its Jewish identity for granted, it is no small matter that a poet from Nguyen’s background has claimed a place in contemporary Israeli letters. Nevertheless, while Vietnam is an important point of reference in this collection, it is one of several that Nguyen’s poems engage, explore, and inhabit. The cartography of The Truffle Eye includes Hollywood, Manhattan, Tel Aviv, Herzliya, Jerusalem, Paris, Amsterdam, and cities in Vietnam, locations that also characterize contemporary Israeli poetry and its transnational turns.

Truffles are notoriously difficult to domesticate, and I have taken this to heart as I translate Nguyen’s poems and their unexpected, unpredictable movements and juxtapositions. Nguyen favors a collage aesthetic, and in my translations I draw ideas and solutions from contemporary U.S. poetry and translation, where this feature is prevalent. Translations come together in the editing, but I find this to be particularly true for this manuscript, which requires layer upon layer of addition, extraction, scratching, and scarring, operations that are also taking place in Nguyen’s Hebrew. Take, for instance, the second stanza of “Mekong River”:

Draw me a monochrome

I’ll release roots at your feet…

I recently shared this translation at a conference in Cambridge and some of the Israelis in attendance pointed out that my original choice of “sketch” muted a potential reference to Antoine de Saint-Exupéry’s The Little Prince (in Hebrew, Ha-nasikh ha-katan, also the name of a popular literary café in Tel Aviv). Nguyen, who was in attendance, didn’t disagree. In a flow chart, divergences are carefully plotted so that all possibilities are taken into consideration, but doing so on fresh potted flowers risks considerable damage. Maybe giving this kind of order to things—to this kind of poem—is both impractical and dangerous, and maybe the scars and tears that this act produces are a vital part of the creative process. Nguyen has been described as “a veritable juggler of Hebrew,” and in bringing her work into English for the first time, I have allowed myself to take risks, to redirect the flow of a line or recast a set of images—to avoid the temptation to connect all the dots.

Adriana X. Jacobs is an associate professor of modern Hebrew literature at the University of Oxford, where she specializes on contemporary Israeli poetry and translation. Her translations of Hebrew poetry have appeared in various print and online venues, including Zeek, Metamorphoses, Truck, Poetry International, Gulf Coast and MQR.

Vaan Nguyen (b. Israel, 1982) is the author of the poetry collection The Truffle Eye (2013, Ma’ayan Press). She is affiliated with Gerila Tarbut (Cultural Guerilla), a collective of Israeli and Palestinian poets, artists and activists, and also has worked as an actress and journalist.