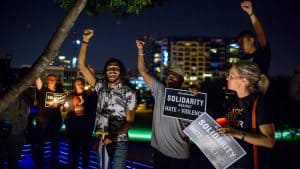 PEN America is horrified and disgusted by recent reports that a driver intentionally rammed a crowd of counter-protesters, causing at least one death and multiple injuries, in Charlottesville, VA, today. While affirming the right to assemble peacefully, PEN America deplores the message of hate spread by white nationalist groups. While white nationalists have the constitutional right to protest non-violently and to vent their views publicly, their despicable message of racism, hatred, and anti-Semitism is an incendiary one aimed to intimidate, vilify, and instill fear. When a group steps out in the public square to spew hateful slogans they have an obligation to understand the impact of their words and to take measures to mitigate the risk of violence. The leaders of today’s march failed abysmally in their duty to urgently and publicly call on all their supporters—whether organized or not—to reject violence and ensure that Charlottesville police could do their jobs and allow this exercise of speech to go forward without risk to public safety. Counter-protesting groups also have a duty to remain peaceful, as the majority reportedly did, engaging in singing, prayer, chanting, and other forms of peaceful expression to reject hate and division. However, clashes between white supremacists and some counter-protesters ultimately resulted in the declaration of a state of emergency, the dispersal of the gathering, and reports of violence. When the only way to ensure public safety is to shut down speech, all sides lose.

PEN America calls on leaders at the local, state, and national levels to condemn the rising tide of hateful and menacing white supremacist rhetoric observed across the country. Acknowledging the right of such groups to speak does not require anyone to condone their message or stay silent as they spread it.

For centuries, writers have helped us process and understand the most difficult, controversial, and heated moments in our history, as well as their historical influences and future trajectories. Today, we feature writing that reflects on this weekend’s deadly protests in Charlottesville, VA, and the  hatred and bigotry that ignited the violence, in hopes that we might find a way forward. We’ll continue to add to the list throughout the day.

America is hooked on the drug of white supremacy. We’re paying for that today, Carol Anderson for The Guardian

The Myth of the Kindly General, Lee Adam Serwer for The Atlantic

The Battle of Charlottesville, Jelani Cobb for the New Yorker

When Does a Fringe Movement Stop Being Fringe?, Vann Newkirk II for The Atlantic

This Was a White-Power Movement Showing Its Strength, Jamelle Bouie for Slate

Charlottesville and the Effort to Downplay Racism in America, Jia Tolentino for the New Yorker

After Charlottesville: End the denial about Trump, E.J. Dionne Jr. for the Washington Post

Fascism Has Already Come to America, Ezekiel Kweku and Jane Coaston for MTV

Is America Headed for a New Kind of Civil War?, Robin Wright for The New Yorker