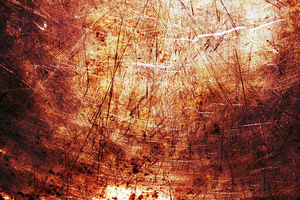 I stood behind her, by the box, holding up her file like a flag. “Word is you’ve not been forthcoming,” I said. There was a stain on the floor beside her, a dried rusty puddle. She jostled in her chair. I walked over to the door and knocked on the frame. A guard entered. I said, “Get me a mop and bucket, some brushes.” I turned back to her. “You know, my daughter and I, we used to mop floors together. A good bonding experience. I think you and I could use a little bonding.”

The guard returned. I dropped the file to the floor, took the mop and the bucket, dismissed him. The water sloshed as I wheeled them her way. She didn’t turn around.

“Come over here,” I leaned the mop handle against the wall, by the box. “I’m not gonna bite, come here.”

I said it again.

She stood, and shuffled over, ankles fettered.

The hate was coming off her like a light.

“How are the ankles?” Blood was scabbing over the cuffs of her trousers.

“Let me tell you how this works,” I said.

She narrowed her eyes.

I crouched down, beside the box. “Interrogation is dichotomy,” I said, looking up at her. “Retain power, show control, but still appear totally uncommitted to the consequences.” I must have smiled, because she did, slightly. “Only information matters. How you get it, well, that depends. I’m a fan of unorthodoxy.” I nodded toward the box. She hesitated, and then crouched beside me. I slid the lid from the box.

There were long thin dead insects littering the bottom, looked like spent bullet casings. “My idea,” I said. “One of them, anyway.”

She stood up. I did too.

“What is your idea?” she said.

“She rises. She speaks,” I said. “Mock burials, my idea. Cover the prisoner’s head and lay him in a box. Throw in bugs for effect. Pour soil on top. Adult men revert to infants.” She did not look away. “I’ve come to know something difficult,” I said. “No need for physical pain. Abandonment, helplessness, let a man feel these, and it’s more than enough. And don’t worry, not what I have in mind. Let’s you and I develop a rapport.” I wheeled the mop and bucket over to the chair and looked down at the rusty stain on the floor. I dipped the mop in the water, put it in the wringer, and wrung it. I dropped the mop on the stain and watched the blood come alive, running along the cracks in the floor. “See how it works? There’s a brush, there, hanging on the bucket.”

She took the brush, and shuffled back beside me.

I gestured for her to go ahead and get to her knees. “How many men you think have bled in this room?”

She went to her knees, and started scrubbing.

“Now that’s what I’m talking about,” I said. “Bonding. You’ve done this before.”

I guessed this was backtalk, which would not be abided. But she spoke before I could respond. “You asked, how many men. But there are women, too.” She kept scrubbing.

I thought about it. She was right. “Maybe you didn’t hear me,” I said.

She did, and said, “You think I clean this for you?”