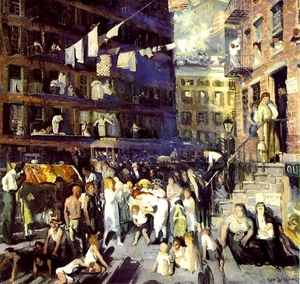 Most of the immigrants came from Italy and Eastern Europe. They were taken in launches to Ellis Island. There, in a curiously ornate human warehouse of red brick and gray stone, they were tagged, given showers and arranged on benches in waiting pens. They were immediately sensitive to the enormous power of the immigration officials. These officials changed names they couldn’t pronounce and tore people from their families, consigning to a return voyage old folks, people with bad eyes, riffraff and also those who looked insolent. Such power was dazzling. The immigrants were reminded of home. They went into the streets and were somehow absorbed in the tenements. They were despised by New Yorkers. They were filthy and illiterate. They stank of fish and garlic. They had running sores. They had no honor and worked for next to nothing. They stole. They drank. They raped their own daughters. They killed each other casually Among those who despised them the most were the second-generation Irish, whose fathers had been guilty of the same crimes. Irish kids pulled the beards of old Jews and knocked them down. They upended the pushcarts of Italian peddlers.

Every season of the year wagons came through the streets and picked up bodies of derelicts. Late at night old ladies in babushkas came to the morgue looking for their husbands and sons. The corpses lay on tables of galvanized iron. From the bottom of each table a drainpipe extended to the floor. Around the rim of the table was a culvert. And into the culvert ran the water sprayed constantly over each body from an overhead faucet. The faces of the dead were upturned into the streams of water that poured over them like the irrepressible mechanism in death of their own tears.

But somehow piano lessons began to be heard. People stitched themselves to the flag. They carved paving stones for the streets. They sang. They told jokes. The family lived in one room and everyone worked:

Mameh, Tateh and The Little Girl in the pinafore. Mameh and the little girl sewed knee pants and got seventy cents a dozen. They sewed from the time they got up to the time they went to bed. Tateh made his living in the street. As time went on they got to know the city. One Sunday, in a wild impractical mood, they spent twelve cents for three fares on the streetcar and rode uptown. They walked on Madison Avenue and Fifth Avenue and looked at the mansions. Their owners called them palaces. And that’s what they were, they were palaces. They had all been designed by Stanford White. Tateh was a socialist. He looked at the palaces and his heart was outraged. The family walked quickly. The police in their tall helmets looked at them. On these wide empty sidewalks in this part of the city the police did not like to see immigrants. Tateh explained that this was because an immigrant some years before had shot the steel millionaire Henry Frick in Pittsburgh.

A crisis came to the family when somebody delivered a letter telling them the little girl would have to go to school. This meant they could not make ends meet. Helplessly, Mameh and Tateh took their child to the school. She was enrolled and went off each day. Tateh roamed the streets. He didn’t know what to do. He had a peddler’s business. Never could he find a place at the curb thai was profitable. While he was gone Mameh sat by the window with her stack of cut cloth and pedaled the sewing machine. She was a petite dark-eyed woman with wavy brown hair which she parted in the middle and tied behind her neck in a bun. When she was alone like this she sang softly to herself in a high sweet thin voice. Her songs had no words. One afternoon she took her finished work to the loft on Stanton Street. The owner invited her into his office. He looked at the piece goods carefully and said she had done well. He counted out the money, adding a dollar more than she deserved. This he explained was because she was such a good-looking woman. He smiled. He touched Mameh’s breast. Mameh fled, taking the dollar. The next time the same thing happened. She told Tateh she was doing more work. She became accustomed to the hands of her employer. One day with two weeks’ rent due she let the man have his way on a cutting table. He kissed her face and tasted the salt of her tears.

At this time in history Jacob Riis, a tireless newspaper reporter and reformer, wrote about the need of housing for the poor. They lived too many to a room. There was no sanitation. The streets reeked of shit. Children died of mild colds or slight rashes. Children died on beds made from two kitchen chairs pushed together. They died on floors. Many people believed that filth and starvation and disease were what the immigrant got for his moral degeneracy. But Riis believed in air shafts. Air shafts, light and air, would bring health, He went around climbing dark stairs and knocking on doors and taking flash photos of indigent families in their dwellings. He held up the flash pan and put his head tinder the hood and a picture exploded. After he left, the family, not daring to move, remained in the position in which they had been photographed. They waited for life to change. They waited for their transformation. Riis made color maps of Manhattan’s ethnic populations. Dull gray was for Jews— their favorite color, he said. Red was for the swarthy Italian. Blue for the thrifty German. Black for the African. Green for the Irishman. And yellow for the cat-clean Chinaman, a cat also in his traits of cruel cunfling and savage fury when aroused. Add dashes of color for Finns, Arabs, Greeks, and so on, and you have a crazy quilt, Riis cried, a crazy quilt of humanity!

One day Riis decided to interview Stanford White the eminent architect. He wanted to ask White if he’d ever designed housing for the poor. He wanted his ideas on public housing, on air shafts, on light. He found White down at the docks looking at arriving shipments of architectural furnishings. Riis marveled at what was coming out of the holds of the ships: whole façades of Florentine palaces and Athenian atria, stone by marked stone; paintings, statuary, tapestries, carved and painted ceilings in crates, tiled patios, marble fountains, marble stairs and balustrades, parqueted floors and silk wall panels; cannon, pennants, suits of armor, crossbows and. other ancient weaponry; beds, armoires, chaises, refectory tables, sideboards, harpsichords; barrels of glassware, silver, goldplate, porcelain and china; boxes of church ornaments, boxes of rare books, snuffboxes. White, a robust burly man with reddish brush-cut hair turning gray, went about smacking the backs of the handlers with his rolled-up umbrella. Careful, you fools! he shouted. Riis wanted to ask him his questions. Housing for the poor was Riis’s story. But he had a vision of the dismantling of Europe, the uncluttering of ancient lands, the birth of a new aesthetic in European art and architecture. He himself was a Dane.

That evening White went to the opening night of Mamzelte Champagne at the roof garden at Madison Square. This was early in the month of June and by the end of the month a serious heat wave had begun to kill infants all over the slums. The tenements glowed like furnaces and the tenants had no water to drink. The sink at the bottom of the stairs was dry. Fathers raced through the streets looking for ice. Tammany Hall had been destroyed by reformers but the hustlers on the ward still cornered the ice supply and sold little chips of it at exorbitant prices. Pillows were placed on the sidewalks. Families slept on stoops and in doorways.